Torturous Milestone: 40 Years in Solitary for the Angola 3

Today marks 40 years in solitary confinement for Herman Wallace and Albert Woodfox. Our article on the Angola 3 appears today on MotherJones.com.

On the world stage, Guantanamo may well stand as the epitome of American human rights abuses. But when it comes to torture on US soil, that grim distinction is held by two aging African-American men. As of today, Herman Wallace and Albert Woodfox have spent 40 years in near-continuous solitary confinement in the bowels of the Louisiana prison system. Most of those years were spent at the notorious Angola Prison, which is why the pair are still known as members of the Angola 3. The third man, Robert King, was released in 2001—his conviction was overturned after he’d spent 29 years in solitary.

Wallace and Woodfox were first thrown into the hole on April 17, 1972, following the killing of Brent Miller, a young prison guard. The men contend that they were targeted by prison authorities and convicted of murder not based on the actual evidence—which was dubious at best—but because they were members of the Black Panther Party’s prison chapter, which was organizing against horrendous conditions at Angola. This political affiliation, they say, also accounted for their seemingly permanent stay in solitary.

For four decades, the men have spent at least 23 hours a day in cells measuring 6 x 9 feet. These days, they are allowed out one hour a day to take a shower or a stroll along the cell block. Three days a week, they may use that hour to exercise alone in a fenced yard. Wallace is now 70; Woodfox is 65. Their lawyers argue that both have endured physical injury and “severe mental anguish and other psychological damage” from living most of their adult lives in lockdown. According to medical reports submitted to the court, the men suffer from arthritis, hypertension, and kidney failure, as well as memory impairment, insomnia, claustrophobia, anxiety, and depression. Even the psychologist brought in by the state confirmed these findings.

Read the rest of the article for updates on the Angola 3’s legal challenges to solitary confinement, as well as to their convictions. We also cover the latest from the two men who are determined to keep Wallace and Woodfox in prison and in solitary: Angola Warden Burl Cain, who says the two men are too “militant” to be in the general population, and Louisiana Attorney General Buddy Caldwell, who has said he opposes releasing them “with every fiber of my being.” 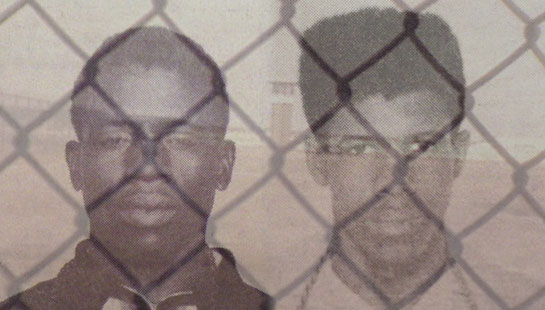 Herman Wallace and Albert Woodfox in the 1970s, with Angola prison in the background. From the film “In the Land of the Free.”

One thought on “Torturous Milestone: 40 Years in Solitary for the Angola 3”