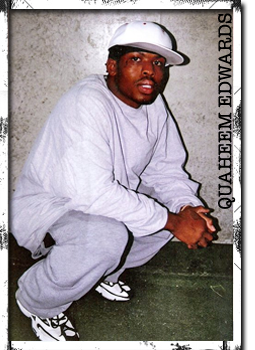 Quaheem “Ox-Splish” Edwards is six years into a 21-year federal prison sentence for conspiracy to distribute cocaine, firearms possession, and witness intimidation. He writes of himself, “There’s much more to my story than what the newspaper said or wrote.” Edwards says he grew up with a strong, loving family, but “still, chose the streets. I have no excuse.”

Edwards was a member of the New Jersey Bloods, and “due to my affiliation, and me doing time the best way I know how (protecting myself),” he writes, “I was shipped to a SuperMax prison on 6/2/09. It’s a program called the SMU (Special Management Unit), which is an 18-24 month program of 23 and 1 lockdown.” The SMU is at USP Lewisburg, a federal maximum security prison in Pennsylvania that has effectively become a supermax.

Edwards has been writing since he was twelve years old, says “there’s no better way to get some writing done than while you’re on lockdown.” To date, he has completed five books, and he says that now he is “strictly about rebuilding and change.” He blogs on the website Live from Lockdown, a project of Raise Up Media. In the following piece, he describes his daily life at Lewisburg.

The white paint on the walls that surround me is shipped and stained from years of blood, sweat and tears. The doorways are so small you have to enter sideways and even a person standing at 5 feet 9 inches has to kneel. You may hear the saying “Prison is prion.” This is far from being true.

This place where I lay my head every night may be the size of a walk in closet and that is with out the normal furnishings. But even with the usual stainless steel sink and toilet, bunkbeds and table, these cells are only enough room for one person. If you have a roommate (and most likely you will) the two of you can’t even be on the floor at the same time. In this place there are holes in the walls where spiders and other insects hide until they think we’re asleep.

It’s hot as hell outside. I know America can relate to this summer’s heat wave. Now picture being trapped in a room where the window barely opens; not to mention the 12-foot pipe that sits in the corner of the cells. All year long this pipe is steaming! I’m talking about a pipe that is so hot, we can boil water in at least twenty minutes! In the hallways on the tiers there are two fans. What good are they on the other side of the door? Our only hope for not passing out is covering these pipes with our sheets and blankets then sleeping by the door. But remember, it’s two of us in a cell……

Welcome to USP Lewisburg a.k.a. “The Big House,” recently labeled the (S.M.U.) Special Management Unit in Lewisburg, Pennsylvania. This is a super-max prison where you are locked down 23-hours a day with the chance of one hour rec, but even that is not guaranteed. This is an 18-24 month program originally designed for inmates who were/are unable to conduct themselves respectfully in population. The SMU Program is ran from three institutions. The others are in Louisana and Alabama, but Lewisburg is by far the worst of the worst.

This is a place where speaking your mind can get you handcuffed and shackled with a belly chain. You can be in this position for anywhere from 72-hours to weeks, maybe even months. You are stripped down to your boxers and in a cell barefoot. A cell that may not have been cleaned in months! Imagine having to use the toilet shackled down…..It is impossible to wipe yourself properly. Depending on what side of the prison you’re housed in, you may not even get a shower.

Now you’re probably wondering what are we doing to get this treatment. Don’t get me wrong, there are some of us who raise hell but also, as I mentioned earlier, as little as speaking your mind will get you tied down. And the cuffs and shackles are tight to the point where your skin peels and bleeds. Where I live is far beyond inhumane. The treatment is brutal and has pushed many over the edge to commit suicide.

Imagine being locked in a cage with another inmate holding a shank (knife). God forbid if you’re getting stabbed, the person has at least a 30-second head start before the C.O.s show up. Even then they don’t go into the cages until both inmates are cuffed. You could be struggling to find your last breath and may be asked to “Cuff Up.”

Welcome to the Big House!

This isn’t a place for any human being. If you have been walking with me through this story, please take heed. This is as real as it gets. Brothers are dying behind these walls and the days continue like nothing ever happened.

To the children of today’s society, don’t become a victim to these surroundings because everything is a cover up. What you see on the Discovery Channel and MSNBC is only what they’re allowed to broadcast. Those programs are edited to scare kids and protect the prisons. This here on LIVEFROMLOCKDOWN.COM is as real as it gets.

To our youth, please take heed to situations and circumstances such as mine and stay positive. They have a cell open for the tough guys too.

With LOVE and RESPECT,

OX a.k.a The Black James Patterson