We’ve just come across a widely circulated article from Agence France-Presse, published on May 18 while Dominique Strauss-Kahn was still languishing on Rikers Island, entitled “Strauss-Kahn’s Suicide Watch Cell Tiny, Isolated.” Here, some highlights from the story:

Under suicide watch, Dominique Strauss-Kahn wears a specially designed jumpsuit and lives in a tiny cell, monitored by a guard positioned just a few steps away, sources said Wednesday. The 11 x 13 foot (3.3 x 3.9 meters) cell is in the West Facility of the infamous Rikers Island prison, located in Manhattan’s swirling East River…[Straus-Kahn] is considered a suicide risk and has been placed on special guard.

Ordinarily, a suspect awaiting trial, considered innocent until proven guilty, is detained with numerous privileges, including the right to wear his own clothes and bring in possessions. Not Strauss-Kahn. A law enforcement source, who spoke on condition of anonymity, told AFP that the 62-year-old VIP has been placed in an area normally reserved for inmates  with contagious diseases.

That’s because the layout, with cells designed to isolate prisoners as much as possible, suits the requirements in this extraordinarily high profile case. So in that tiny space he has in addition to his bed a shower and toilet and table for eating. And he is entirely alone. Or almost. “There’s no one else there except guards. In this case, there is a guard just a very few feet away,” the source said…

The French politician, who denies all charges, is allowed to exercise one  hour daily outside. He also has the run of a day room where he can watch television, including the nearly non-stop news coverage of his own case.

Norman Seabrook, president of the correction officers union, said everything was being done to protect Strauss-Kahn from suicide — and other inmates on Rikers. 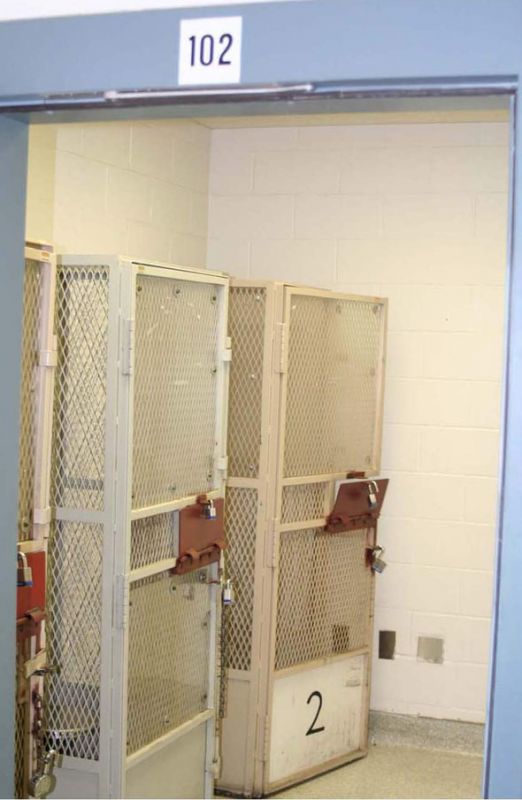 The article was only one of many in the overseas press depicting Rikers Island as an almost mythically dark and menacing place–though the descriptions often don’t quite measure up to the hype. One British piece called Rikers a “penal colony,” and continued: “Rikers is harsh, loud and dangerous, according to those who know the island jail well. ‘It’s crowded and the food is terrible,’ Gerald Lefcourt, a well-known defence lawyer, told Reuters…’There are really heavy-duty prison bars and gates that make a lot of clanging sounds every time they are open and closed.'”

In fact, DSK’s cell, at 11 x 13, or 143 square feet, is well over twice the size of the isolation cells in the Louisiana Prison system, where Herman Wallace and Albert Woodfox have spent 39 years in solitary; those cells measure approximately 6 x 9, or 54 square feet. The cell at ADX Florence federal supermax where Thomas Silverstein is approaching his third decade in solitary is 7 x 12, or 84 square feet. Few cells where American prisoners spend months, years, or decades in isolation are as large as that in which Dominique Strauss-Kahn spent a few days.

As for other prisoners on suicide watch, they are on occasion confined in what have been called “squirrel cages”–tiny enclosures so small that their occupants cannot lie down, where they are sometimes left to stand in their own excrement. Such cages, measuring 3 x 3 feet, were cited in a case in Louisiana last year, and in the Supreme Court decision on California’s prisons that came down earlier this week. Writing for the majority in Brown v. Plata, Supreme Court Justice Anthony Kennedy stated: “Because of a shortage of treatment beds, suicidal inmates may be held for prolonged periods in telephone-booth sized cages without toilets…A psychiatric expert reported observing an inmate who had been held in such a cage for nearly 24 hours, standing in a pool of his own urine, unresponsive and nearly catatonic. Prison officials explained they had ‘no place to put him.'” (You can view more photos of these “suicide cages” and other abominations of the California prison system here.)

One thought on “DSK's "Tiny" Cell Was Spacious by U.S. Solitary Confinement Standards”