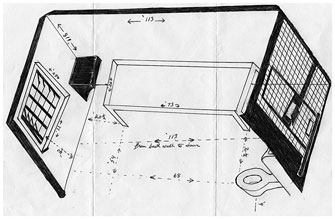 Drawing of a cell in CCR, by the Angola 3's Herman Wallace

The Baton Rouge Advocate reports that the Louisiana Department of Corrections “is contemplating the sale of prisons and the closure of an inmate isolation unit in order to cut costs during difficult budget times.” Corrections Secretary Jimmy LeBlanc told the Advocate, “Everything has to be put on the table” to deal with massive state budget deficits. The Jindal administration has instructed state agencies to submit plans to their budgets by a whopping 35 percent.

Louisiana has already sold some tracts of land belonging to the Department of Corrections, and is considering selling two state prisons outright to the private prison corporations that now operate them. This would provide a short-term cash fix of $70 million–but could cost the state just as much, or more, to house its prisoners over the long run.

One possible plan is to close the solitary confinement unit at the Louisiana State Penitentiary at Angola, which is called Closed Cell Restricted, or CCR. The Advocate reports:

At the Louisiana State Penitentiary at Angola, some inmates are housed in a unit known as CCR near the prison’s front gates. CCR is an isolation unit that has been home to inmates such as convicted serial rapist Jon Barry Simonis and, more famously, the Angola 3, a group of prisoners who sued the state for keeping them in solitary confinement.

LeBlanc said CCR is reserved for inmates who cannot live with the rest of the prison population because they have protection issues or because they committed especially heinous crimes.

He said the unit holds 101 cells, not including 40 trustee beds, and is expensive to operate. He said the state buy phentermine usa online could save roughly $1.8 million for the remaining nine months of the fiscal year by closing CCR and moving the inmates to unoccupied cells on death row and possibly putting them in double bunks at Camp D.

Moving inmates to death row or placing them in 23-hour-a-day lockdown with one other person doesn’t sound like a big money saver, much less any improvement in conditions over the current CCR. If the Louisiana DOC really wanted to save money, it could look to its neighbor Mississippi.

The Mississippi State Penitentiary at Parchman–like Angola, a sprawling prison plantation–used to have a notorious, 1000-bed solitary confinement unit called Unit 32. But over several years, under pressure from an ACLU lawsuit, the state has been in the process of shutting down Unit 32, transferring many of its residents to the general population or to a dedicated mental health unit, rather than simply to other isolation cells. In fact, Mississippi has been re-examining and reforming its entire inmate classification system. The outcomes of this process, according to a 2009 study, include “large reductions in the rates of misconduct, violence, and use of force.”

CCR’s most famous inmates, the Angola 3’s Albert Woodfox and Herman Wallace (who was recently moved to a lockdown unit at nearby Hunt Prison), were convicted of murdering a prison guard almost forty years ago, and have been in solitary confinement ever since. They are now in their sixties and have clean disciplinary records, but are still deemed too dangerous to rejoin the general population–largely, according to Warden Burl Cain, because of their historical association with the Black Panthers.