Solitary Watch spent last week in Colorado. We talked with faculty and students at the University of Denver Law School’s Civil Rights Clinic, which has mounted several groundbreaking legal challenges to solitary confinement. In the coming weeks we will be writing about these individual cases, as well as what we learned from meetings with other advocates and experts in Denver. We also traveled to Cañon City, 115 miles southwest of Denver and home to 14 state and federal prisons. 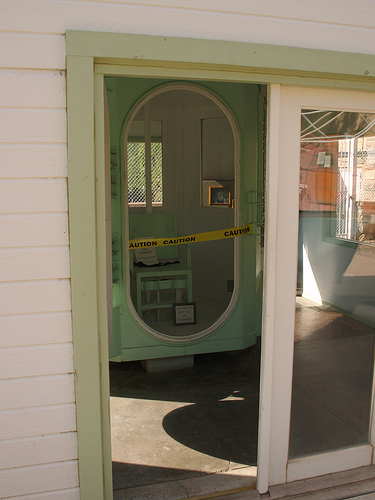 The Museum of Colorado Prisons in Cañon City has a gas chamber in its front yard–not a replica, but the actual gas chamber used for eight executions, the last one in 1967. Housed in a purpose-built shed and painted a sickly green, the death pod holds a single chair, which bears a sign warning visitors:  “Please do not sit in chamber.” Visitors are, however, welcome to try out the cells located just across the yard, and even pose for a photo by standing behind a plywood cutout of a prisoner wearing old-fashioned convict stripes.

The cells come from the active prison that lies right next door to the museum, its high, ivy-covered walls shadowing the yard. Opened in 1871, the prison is older than the state itself, and is still called the Territorial Correctional Facility; it now holds more than 800 men. The museum building itself was once the women’s arm of Territorial, and its exhibits are laid out in the 30 cells that line both sides of a long hall.

There are cells dedicated to famous prisoners, past wardens, and guards killed in the line of duty, and others containing historical photos, vintage prison uniforms, and “behavior control devices” including balls and chains, cattle prods, gas guns, and a kind of whipping horse that was known as the “Old Gray Mare.” 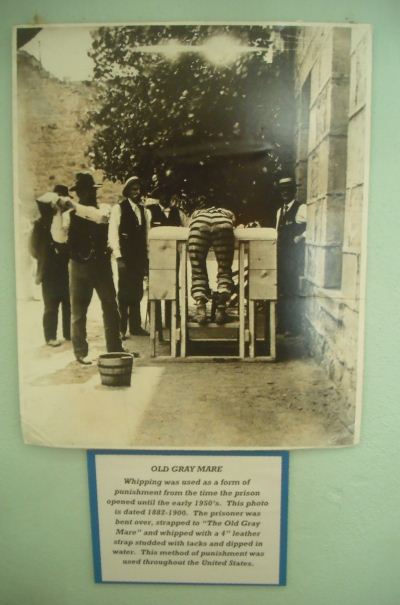 The printed museum guide assures visitors that “‘The Old Gray Mare’ and the items on exhibit can no longer be used because the court system deemed their use cruel and unusual punishment.” Here and throughout the museum, there’s a sense that these things belong to some distant past that is separated from the present by more than just time. They are presented as relics from a less civilized era that have little in common with our present-day corrections system. Therefore, they can be viewed as historical curiosities, rather than as challenges to our own humanity. (How else to explain the jokes and laughter that emanate from a group of seniors as they view the room of torture devices?)

But the reality of Cañon City belies these distinctions. The town is the seat of Fremont County, which proclaims itself “Colorado’s Correctional Capitol.” It houses close to 5,000 state prisoners and 3,000 federal prisoners in 14 prisons. In addition to Territorial in downtown Cañon City and a women’s prison on the edge of town, the Colorado Department of Corrections maintains the East Cañon Correctional Complex on the highway just outside Cañon City, which consists of eight facilities holding minimum, medium, and maximum security male prisoners. These include the supermax Colorado State Penitentiary (CSP), with more than 700 solitary confinement cells, and the newly opened Centennial South (previously known as CSP II), with 300 more.

About 10 miles southeast of Cañon City and just outside the small village of Florence is the Federal Correctional Complex, which consists of four prisons. One of them is the notorious ADX Florence, considered the most secure prison in the federal system, with about 400 prisoners in 23- to 24-hour-a-day solitary confinement.

In future posts, we will be describing conditions in both CSP and ADX as we review several current lawsuits challenging these conditions. Readers can judge for themselves whether a few minutes on the “Old Gray Mare” is all that much worse than a few years–or a few decades–in today’s solitary confinement.