Today we’re cross-posting an entry from my blog Unsilent Generation, because of its relevance to an issue we’ve written about before: environmental and animal rights activists placed in federal supermax Communications Management Units (CMUs) under the vastly overreactive Animal Enterprise Terrorism Act (AETA).

The gist of this is that if you pursue some modest reforms through the legislative process, you’re an animal lover; if you take things a step further, you’re a terrorist–even if you commit no violence against human beings, and damage nothing but property. The subject is particularly timely at the moment because of the ongoing legal drama involving defendants who are being called the AETA 4–four activists who engaged in what by most standards would clearly qualify as Constitutionally protected free expression. 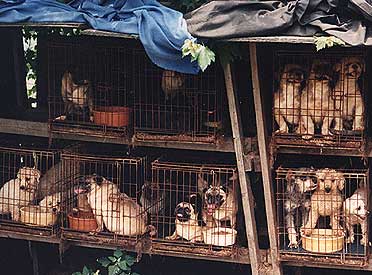 Congress.org reports today on bills recently introduced in both houses of Congress. The Puppy Uniform Protection and Safety (PUPS) Act (S 3424 and HR 5434) would “amend the Animal Welfare Act to provide further protection for puppies.”

The bills, from Sen. Dick Durbin (D-Ill.) and Rep. Sam Farr (D-Calif.), were introduced at the end of May and tail a Department of Agriculture inspector general report regarding federal investigations of breeders.

The IG report, released May 25, says large breeders who sell animals covered under the Animal Welfare Act (AWA, PL 89-544) online are exempt from inspection and licensing requirements “due to a loophole in AWA.” The IG says there are “an increasing number” of these unlicensed, unmonitored breeders.

The bills would require licensing and inspection of dog breeders that sell more than 50 dogs per year to the public (including online) and would also outline additional exercise requirements for dogs at facilities – such as having sufficient, clean space and proper flooring.

According to a press release, Durbin said he would work administratively with the USDA to fix problems at its Animal and Plant Health Inspection Services, and then introduce addition legislation if needed.

Supporting humane treatment of puppies would seem like a political no-brainer, right? As Liliana Segura pointed out on Twitter earlier today, what could be better in the upcoming midterm elections than “to be able to say ‘our opponents HATE puppies’”? Mainstream groups like the Humane Society have been pushing for legislation action on puppy mills for years, to little avail. (Click here to see video of a Humane Society raid on a massive puppy mill in Tennessee, and here to read some gruesome details from the USDA’s report on puppy mills.) Yet the bills are not exactly barreling their way through Congress; both are waiting for attention from agricultural subcommittees, and after two months, the Senate bill has only seven co-sponsors.

In addition, when it comes to animals routinely used in cosmetic testing, and animals (including puppies and dogs) treated cruelly in drug testing and medical research, the federal government has pretty much sat on its hands–or worse. To take one particularly galling example, the Physicians Committee for Responsible Medicine last year exposed an effort on the part of the National Institutes of Health to sell young constituents on the idea of animal experimentation. As Stephanie Ernst wrote on Change.org:

[T]he NIH promotes, on its Web site, a children’s coloring book that gives a skewed view of animal experiments. The coloring book implies that researchers are trying to cure animals that are already sick—rather than purposely infecting them with diseases—and ignores the fact that animals suffer and die in the process. The coloring book, entitled The Lucky Puppy, was produced by an industry trade group, the North Carolina Association for Biomedical Research, whose members have a financial interest in the continuation of animal research…

The book erroneously portrays the lives of animals in laboratories as pleasant and carefree. Published scientific research and numerous undercover investigations clearly demonstrate that animals in laboratories suffer pain and distress from experimental procedures and routine laboratory practices. The coloring book also makes misleading claims about the benefits of animal experiments, implying that research findings from experiments on animals are directly applicable to both the animals used in research and to humans.

The federal government is also actively engaged in protecting animal testing and experimentation against protests mounted by animal rights activists. Anyone who chooses to take action against an animal testing facility is not, as one would expect, subject to charges of breaking-and-entering or vandalism. Instead, they are branded terrorists under the notorious Animal Enterprise Terrorism Act. For actions in which no human being were harmed, they can end up serving long sentences in a federal supermax Communications Management Unit.  (See the blog Green Is the New Red for the best information on AETA.)