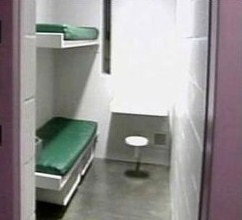 Cell at the Century Regional Detention Facility in Lynwood, CA

Get ready. We are likely to hear more from the press about solitary confinement in the next month than we have in the last year. That’s because when Lindsay Lohan surrenders herself for her 90-day prison term, she reportedly will be housed in isolation in Lynwood, California’s Century Regional Detention Facility (CRDF).

“Gawker” says that Lohan “will be kept away from the general population in a version of solitary confinement that is specially designed for famous people and other special inmates.” “Inside Edition” also reported that because Lohan is a celebrity, “she’s a target in jail. So, she will be kept essentially in solitary confinement.” This same kind of “protective” isolation was given to former CRDF inmates Paris Hilton and Nicole Richie–and presumably Lohan herself, when she served an 84-minute term there for DUI in 2007.

Though we wouldn’t wish 90 days in solitary on anyone, our point here is not to convince readers to feel sorry for Lindsay Lohan. The fact is, Lohan’s future conditions of confinement highlight a widespread issue with what’s termed “protective custody.”

On any given day, thousands of inmates across America are in solitary confinement not because of any perceived disciplinary infraction, but rather “for their own protection.” Prisoners are placed in “protective” isolation because they are targets for violence or sexual assault; because they are mentally ill or suicidal; because they are lesbian, gay, or transgender; and because they are children–in other words, by no fault of their own.

Many of these inmates have already been victimized in prison, and by placing them in solitary, the prison system victimizes them for a second time. Conditions in protective isolation are, in most cases, exactly the same as those in disciplinary or “administrative” segregation. In order to be “protected,” these prisoners are usually placed in the same small, often windowless cells that are used for punishment; they remain there for 23 hours a day or more, with brief respites for a shower or some solitary exercise in an empty cage. Like other prisoners in solitary, they are usually denied any opportunities for work, recreation, education, and sometimes even drug treatment or counseling.

Lindsay Lohan’s experience will no doubt be less harsh than that of most prisoners in protective isolation. Still, as Fox News reports,  “It is expected that Lohan will be placed in solitary confinement and granted limited contact with other inmates, as well as the ‘privilege’ of stepping out into the sunshine for a small amount of time each day.” She will be “allowed only to see her family on two scheduled days per week.”

Lohan’s sentencing was enough to get her tweeting about international human rights protocols: “It is clearly stated in Article 5 of the UN Universal Declaration of Human Rights that ….. ‘No one shall be subjected to torture or to cruel, inhuman or degrading treatment or punishment,'” read her Twitter feed. Maybe her jail time will turn her into a dubious spokesperson against solitary confinement. Stranger things have happened.

One thought on “Celebrities in Solitary: Lindsay Lohan Goes to Lockdown”