A suit brought by law students on behalf of one of the nation’s most most notorious supermax prisoners could break new ground in challenging long-term solitary confinement on Constitutional grounds.

Earlier this year, we wrote about the case of Thomas Silverstein, who has now spent 27 years in solitary under a “no human contact” order–and who recently sued the Bureau of Prisons with the help of the Civil Rights Law Clinic at the University of Denver. This week, a decision by a federal district court judge cleared the way for the case to move forward. Alan Prendergast, of the Denver weekly Westword, reported on these latest developments.

When you’ve spent your time since the early days of the Reagan years in a cell smaller than some people’s closets, progress tends to get measured in small, small increments rather than sweeping events.

But Thomas Silverstein, America’s most isolated federal prisoner, got some momentous news today. His lawsuit challenging his decades of solitary confinement is still alive.

U.S. District Court Judge Philip Brimmer has ruled that Silverstein’s case, which raises questions about possible constitutional violations in the way the U.S. Bureau of Prisons consigns prisoners to administrative segregation for years or even decades, can move forward — a decision that could have implications for other federal prisoners in solitary, too.

A bank robber who was convicted of killing two inmates while serving time in the federal penitentiary in Marion, Illinois, Silverstein was put under a “no contact” order after he managed to murder a correctional officer at the high-security pen in 1983. Since that time, he’s been in basement isolation cells with buzzing lights, in his own wing of the Leavenworth pen, and, since 2005, buried in the bowels of the U.S. Penitentiary Administrative Maximum (ADX) in Florence…

Prison officials have contended that the extreme degree of isolation Silverstein has endured — including little or no communication with other inmates and entire years spent without leaving his cell — is necessary, in light of his violent history. But in 2007, law students at the University of Denver’s Sturm College of Law filed suit on his behalf, challenging his long confinement as cruel and unusual punishment and for lack of due process.

Brimmer’s ruling dismisses some of Silverstein’s claims against individual defendants, but leaves intact his Fifth and Eighth Amendment claims against the BOP. Although the case is still a long way from trial, DU law professor Laura Rovner views the ruling as a rare victory in civil-rights activists’ efforts to challenge the nature of solitary confinement itself.

In an email to Solitary Watch earlier this week, Laura Rovner explained the significance of the judge’s decision:

Probably the most significant part is the decision on the Eighth Amendment claim, as it is one of only two or three in the entire country where a court has held that solitary confinement alone is enough to state a claim for cruel and unusual punishment, even absent mental illness or other physical harm.

We anticipate and hope that this decision will have a positive impact on the ability of litigators across the country to challenge the disturbing trend of holding individuals in solitary confinement indefinitely. 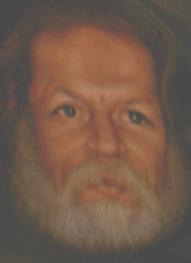 Self portrait by Tommy Silverstein

Silverstein, who is now 57, is believed to have been held in complete and continuous isolation for longer than any other federal prisoner. The suit filed by Rovner and her students alleges that the government’s “deliberate indifference has resulted in Plaintiff suffering deprivations that cause mental harm that goes beyond the boundaries of what most human beings can psychologically tolerate.”

The full text of the judge’s decision in the case can be found here.