Over the past year, I’ve been writing about the Angola 3 in a series of stories for Mother Jones. Earlier stories have highlighted the men’s federal lawsuit, which claims violations of their constitutional rights, and on Albert Woodfox’s criminal appeal. The latest story, by Jean Casella and myself, focuses on Herman Wallace, and was published last week.

For the better part of four decades, Victory Wallace, 70, has made a monthly trip from New Orleans to the Louisiana State Penitentiary at Angola to visit her brother Herman, who just turned 68. The 140-mile journey has shades of Heart of Darkness, following the course of the Mississippi River to a remote prison colony from which most inmates never return. At the dark heart of this former slave plantation, Herman Wallace has lived most of the past 37 years in solitary confinement, imprisoned alone for 23 hours a day in a 6-by-9-foot cell.

When Herman was moved in the spring of 2009 from Angola to Hunt Correctional Center near Baton Rouge, Vickie’s trip got a bit shorter. But what she found when she arrived on her most recent visit was even worse than usual. Because of a disciplinary infraction, Herman had been placed in “extended administrative lockdown.” That meant Vickie was denied a contact visit, and was permitted to see her brother only through a glass partition as they spoke over a telephone. His hands were shackled to the table. (Other recent visitors reported that the shackles made it hard for him to hold the phone to his ear, while his hearing loss made communication over the telephone difficult.) Herman complained to Vickie that he was cold, and she thought that he had lost weight. His spirits, she said, were not the best.

For years, Herman Wallace’s hopes have ridden on two cases that are inching their way through the courts—one challenging his conviction, the other challenging his long-term solitary confinement. Now, after a decade of starts and stops, obstacles and delays, both cases are advancing toward conclusions that will determine how he spends what’s left of his life….

Full the story at Mother Jones.com. 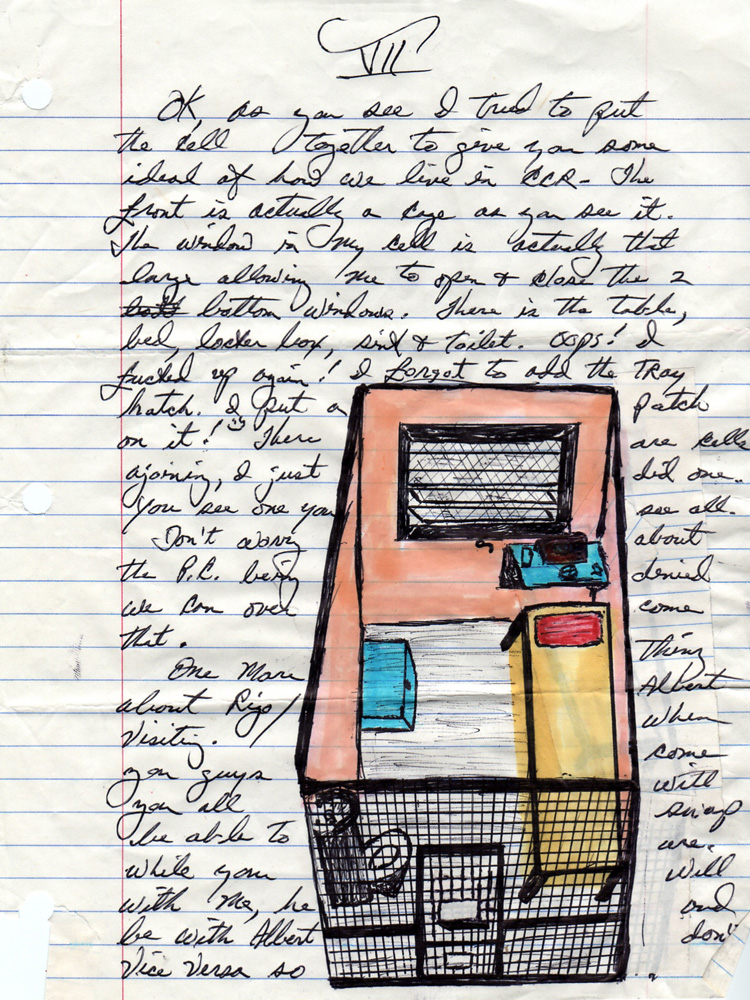 Herman Wallace’s drawing of his cell, from a letter to Jackie Sumell.

One thought on “Southern Injustice: 37 Years in Solitary”