On June 2, for the first time in 25 years, the Bureau of Prisons directed all federal jails and prisons to implement a full lockdown, confining nearly 160,000 people to their cells and severely limiting contact with the outside world. The following day, on the orders of Attorney General William Barr, the Bureau pulled some of its most militarized units out of BOP facilities and deployed them to confront protesters on the streets of Washington, D.C.

Typically, a lockdown occurs in a single facility at the discretion of the warden, usually in response to temporary incidents like fights or, more rarely, longer-term issues like inadequate staffing levels. But this June’s full lockdown was extraordinary in its pretext, scope, and duration. It heightened restrictions already in place in federal facilities, which have been on “modified” lockdown since March in an effort to contain the spread of COVID-19. A BOP employee told The Appeal in June that the heightened lockdown kept people in their cells or units for 24 hours a day, often without access to phones, email, or showers.

The BOP announced the lockdown would last “until it is calm around the nation,” referencing protests against police brutality and the killing of George Floyd, a black man, by a white Minneapolis police officer. The BOP did not mention any specific protest or incident that had yet occurred inside any facility. Rather, BOP Spokesperson Justin Long explained that the Bureau was acting “in an abundance of caution.” The preemptive nature of the lockdown distinguishes it from the last nation-wide lockdown in 1995, which followed two days of violent incidents at three prisons.

The day after the BOP announced the lockdown, Attorney General Barr ordered the Bureau to dispatch its “Crisis Management Teams” to Washington and Miami, according to a statement from the BOP. These teams consist mainly of units called Special Operations Response Teams (SORT), who train to deal with tactical situations far beyond everyday prison security. In an interview with Solitary Watch, a former correctional officer and administrator with 23 years experience in the BOP explained that SORT teams are deployed only rarely, in response to extraordinary incidents like hostage situations. In addition to specialized training and duties, they use lethal, military-grade equipment, such as sniper rifles and grenades.

In Miami, Mayor Carlos Gimenez flatly rejected the BOP officers, telling CBS News, “We didn’t ask them to be here. We told them we didn’t need them here. There is no reason for them to be here.” 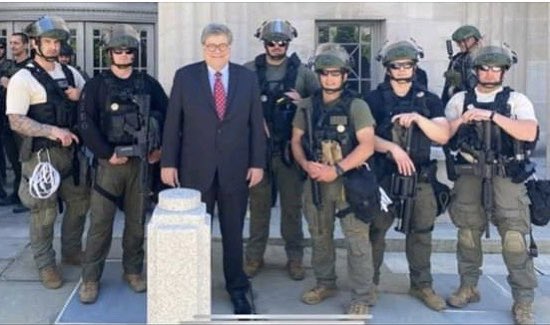 In a photo obtained by the Huffington Post’s Ryan Reilly, Attorney General Bill Barr poses with a BOP SORT team outside the Justice Department’s headquarters in Washington, D.C.

In Washington, D.C., where the federal government exercises more authority over local affairs, videos from June 3 showed hundreds of men lining the streets of Washington, D.C., in military-style gear, complete with helmets, bulletproof vests, and grenade launchers. A journalist at local radio station WTOP photographed officers in BOP insignia, surrounded by others with no insignia or badges.

A few blocks from Lafayette Park, Solitary Watch staff member Valerie Kiebala saw about ten officers wearing jackets marked “DCT,” short for Disturbance Control Team. The BOP told Solitary Watch that these BOP units, which are distinct from SORT, “specialize in crowd control scenarios” within prisons. The officers did not wear badges with their names, and refused to identify themselves to Kiebala when asked.

Advocates quickly expressed concern that it is impossible to hold anonymous officers accountable for potential violence against protesters. House Speaker Nancy Pelosi wrote to President Trump on June 4, noting that officers from the BOP, the U.S. military, the National Park Service, and various states’ National Guards were all seen on the streets of D.C., as well as officers with no insignia whatsoever, contributing to a “lack of clarity that may increase chaos.”

Following publicity, the BOP confirmed that some of its prison guards had, in fact, been deployed to D.C. without identifying uniforms or external badges, noting that the officers carried their badges instead of wearing them, and wore non-BOP clothes because they were “serving a broader mission.” BOP Director Michael Carvajal responded to the criticism: “We normally operate within the confines of our institution, and we don’t need to identify ourselves.”

“They’re just not trained for how to assess this situation,” she told Solitary Watch, noting that the First Amendment right to assembly does not exist behind prison walls. “It’s absolutely legal for a prison employee to shoot live ammo into a crowd if the intent is to quell the riot… The whole point of having specially trained units is to have people who can fall back on their training. SORT is trained, under their standards, on how to respond to an uprising.”

Asked if the SORT units received training on how to deal with non-incarcerated protesters in Washington, D.C., the BOP did not respond to the question. Coincidentally, a June 2020 memo from the Department of Justice’s Inspector General—which was uncovered by the Huffington Post’s Ryan Reilly—criticized SORT teams for their “inappropriate and dangerous” conduct during training exercises the previous year, which resulted in injuries to other BOP staff from flash bang devices, pepper spray, and non-lethal ammunition.

Of more than 5,800 federal agents amassed by Barr to police the protests, at least 445 were BOP officers, according to an internal document compiled for the Joint Chiefs of Staff. Although the full lockdown of BOP facilities began just one day prior to the deployment of prison guards to city streets, the exact connection between the two moves has yet to be established.

What is clear is that the removal of crisis teams from federal facilities came at a time when BOP staffing was already severely stretched. A 2018 New York Times investigation documented BOP staff shortages that forced nurses, food service workers, and other employees to assume the work of correctional officers. And a report from the Justice Department’s Inspector General (now removed from the DOJ’s website) cited insufficient staffing as a primary challenge to “managing a safe, secure, and human [sic] prison system.” Inadequate staffing has led to lockdowns in the past; one understaffed Mississippi state prison was locked down for months in 2019.

The confluence of the two events also unwittingly supports arguments currently being made by criminal justice reformers and abolitionists: that the brutality exhibited by many prison guards is a corollary to police brutality on the streets, and that both are core components of a pernicious and racist structure. As Mohamed Shehk of the abolitionist organization Critical Resistance told The Appeal, “These violent systems are interlocking and feed off each other.”

The  June lockdown produced  harsher conditions than the preexisting “modified lockdown” that the BOP had instituted in March to “prevent congregate gathering and maximize social distancing” and slow the spread of COVID-19. Although the modified lockdown restricted movement and interaction, many people still retained occasional access to privileges like phones, email, and showers. The full lockdown, however, ended virtually all movement and left people stuck in cells round the clock.

“Lockdown is a form of solitary,” said Eddie Ellis, who spent 15 years in federal prison, starting when he was still a teenager, and is now an advocate with the Campaign for the Fair Sentencing of Youth. Ellis pointed out that the same vulnerable populations most affected by solitary confinement — youth, people with mental illness, individuals with disabilities — can also be deeply damaged by the isolation and idleness of an extended lockdown.

The full lockdown severely limited communication between the more than 158,000 people in BOP custody and those on the outside. Individuals who did manage to get messages to loved ones, often using contraband cell phones, provided a glimpse of life under lockdown. In Wisconsin, one man told his sister that he was isolated in a cell without a sink or toilet, and described rising tensions between frustrated prisoners and staff, with prisoners screaming for access to the most basic needs. A person incarcerated in a federal prison in Georgia described to the Incarcerated Workers Organizing Committee being “denied access to emails, phone calls, commissary and even showers” for over a week.

Ellis confirmed that these descriptions match accounts his organization heard from other people incarcerated in the federal system. He added that the full lockdown also affected access to legal counsel, even as critical court dates approached.

The use of blanket lockdowns has also been criticized by health experts, who have sharply rebuked the conflation of solitary confinement and medical isolation. “Turning to the punitive practice of solitary confinement in response to the COVID-19 crisis will only make things worse,” wrote Dr. Brie Williams, a professor of medicine at University of California San Francisco and director of Amend, which aims to reduce the negative health effects of prisons and jails. Solitary confinement as a containment strategy is also ineffective and can be counterproductive, as people hide symptoms of illness in fear of being sent to the hole. Despite the dramatic increase in the use of solitary generated by lockdowns, the New York Times reported on July 19 that all ten of the top “clusters” of COVID-19 cases were in jails and prisons.

Although NPR reported that the nationwide full lockdown was lifted by June 15, it remains unclear if and when each facility returned to the less severe “modified lockdown” status implemented to fight the Coronavirus. BOP records obtained via Freedom of Information Act requests and reviewed by Solitary Watch show that regional offices of the BOP track data on lockdowns, including their cause and duration. But the BOP does not make this data public, and did not respond to Solitary Watch’s request to review current data.

The Council on Criminal Justice, an independent task-force of former politicians, prosecutors, and professors across the political spectrum, argues that the BOP’s lack of transparency worsens the mismanagement, abuse, and lack of programming plaguing BOP facilities. It recommends creating an oversight committee with “the power to obtain data, analyze it, and distribute findings to the public.”

For some incarcerated people, the June lockdown in particular, ordered preemptively in response to the nation’s demand for an end to state violence, has stoked resentment and resistance. “This latest [lockdown] amounted to the BOP holding us hostage, to keep us disconnected from the righteous rebellions and demonstrations that were going on outside,” said one person incarcerated in a federal prison. “The struggle that’s going on outside is naturally and inseparably our struggle as well, and no lockdown can change that.”

Banner photograph of armed officers with “Corrections” shields from WUSA9 TV in DC.