On April 1, the federal Bureau of Prisons activated its first nationwide lockdown in nearly 25 years. In an effort to limit the spread of the coronavirus, the nearly 146,000 men and women held in BOP facilities are spending 14 days confined to their cells for up to 24 hours a day, in what is effectively solitary confinement.

The BOP press release announcing the lockdown said that programs and services “such as mental health treatment and education” would be provided “to the extent practicable”—which, according to anecdotal accounts from the inside, is hardly at all. All visits were banned weeks ago, and with longstanding staffing shortages made worse by the virus, there are no guarantees of showers, clean laundry, or phone calls, either.

Americans across the country who are sheltering in place in their homes may casually refer to being “in solitary confinement” or “locked down,” even when they are with loved ones and have unlimited entertainment and digital communications at their fingertips. While these conditions are genuinely challenging to both physical and mental health, they are something quite different from what is  experienced by people held in solitary in the nation’s prisons and jails.

The extreme isolation of solitary confinement has been proven so psychologically damaging that it has been widely denounced as torture. But now, just as a decade of advocacy had begun to significantly reduce the use of the practice, the COVID-19 pandemic is threatening to force thousands of incarcerated people into new forms of solitary that differ very little from the old.

In addition to the feds, some of the nation’s largest state prisons systems—including Texas, California, Florida, Pennsylvania, and Illinois—have instituted statewide or partial lockdowns. And throughout U.S. prisons, jails, and detention centers, solitary confinement is becoming the first-line response when incarcerated people show symptoms of COVID-19, test positive, or are thought to have been exposed to the virus.

In a particularly grim illustration of this trend, the Louisiana State Penitentiary at Angola re-opened the notorious isolation unit known as Camp J, which it had closed two years ago as part of a widely publicized reduction in the state’s use of solitary confinement. The Louisiana Department of Corrections (LDOC) announced that incarcerated people from around the state who test positive for the coronavirus, including pre-trial detainees at local jails, will be shipped to Camp J or to one other designated prison unit for quarantine—raising accusations that Louisiana is creating “death camps.”

In an interview with The Intercept, one local advocate said of the all-solitary Camp J, “This is not a medical facility. This is a dungeon that has had some beds and a mop thrown into it.” Another called the unit “not suitable for living. People think of Camp J and… they basically think, you’re going to send me there to die.” Medical care at Angola is already so poor that in February a federal judge declared parts of it unconstitutional, and while the LDOC says that people will be transported from Camp J to local hospitals if they become seriously ill, there are no ventilators or fully equipped ICUs anywhere within miles of the remote prison.

An emergency motion for a temporary restraining order to block the transfers to Angola, which was described as “an action that will likely result in the death of dozens if not hundreds,” was denied last week by a federal judge. It was only one of dozens of motions and lawsuits filed around the country in the past month by prisoners’ rights lawyers desperate to reduce what they fear will be mass casualties.

In a declaration filed in support of an emergency motion for a mass release of people from California’s prisons, Dr. Craig Haney, leading expert on the psychological effects of solitary, warned that attempts to stop the spread of the virus will in many cases take the form of extreme solitary confinement. “Indeed, I have seen precisely this form of social distancing utilized as a matter of course in numerous correctional institutions throughout the country, where medical quarantines are conducted in prison infirmaries or other housing units by effectively placing prisoners in solitary confinement,” he wrote.

Most lawsuits so far have likewise focused on getting as many people as possible out of custody as quickly as possible, as the best way to bring vulnerable people to safer environments while providing more room and more resources for those left behind. But even in the growing number of  jurisdictions that are making or planning releases, the numbers remain relatively small. In the best-case scenario, they are unlikely to add up to a significant percentage of the total 2.2 million people in U.S. prisons and jails.

In response to this reality, an emerging group of advocates is confronting the challenge of how jails and prisons can limit the spread of the virus without the widespread use of solitary confinement, and the devastating physical and psychological damage that would cause. One leader among these groups is Amend, based at UC San Francisco, whose mission is to reduce the devastating public health effects of incarceration.

While encouraging release as a first response to the coronavirus, Amend also recognizes that “decarceration alone will fall profoundly short of what is needed to effectively safeguard the health and well-being of those living and working in correctional facilities over the months ahead.”

Today, Amend released a new briefing paper titled “The Ethical Use of Medical Isolation—Not Solitary Confinement—to Reduce COVID-19 Transmission in Correctional Settings.” The paper asserts: “Separating people who become infected is a necessary public health challenge, particularly in prisons and jails. But turning to the punitive practice of solitary confinement in response to the COVID-19 crisis will only make things worse.”

Amend acknowledges that the only spaces where quarantine is possible in some facilities are cells intended for prolonged solitary confinement. These cells are designed to “keep people socially isolated in a closed cell without a meaningful opportunity to communicate with family, friends, and loved ones or to participate in exercise, educational, and rehabilitative programming.” They present barriers to communication with health care staff, so that “people with symptoms may go undetected.” Even when people are locked down in their own cells, some of the same risks apply.

Equally dangerous, Amend argues, is the likelihood that “fear of being placed in solitary will deter people from reporting symptoms to correctional staff.” Because most incarcerated people are painfully aware of the torturous effects of isolation, some undoubtedly will not come forward when they feel ill, or will delay speaking up until the disease is advanced. “This avoidance of reporting symptoms or illness will not only accelerate the spread of infection within facilities but also increase the likelihood of prisoner deaths due to lack of treatment.”

This warning is borne out by accounts from inside prisons. Even before the COVID-19 pandemic took hold, San Quentin News editor Juan Moreno Haines wrote that men who caught the regular seasonal flu were “punished for getting sick” by being placed in conditions no different from the solitary confinement doled out as “disciplinary segregation” for breaking prison rules. As a result, the fellow incarcerated men he spoke with went to great lengths to hide their symptoms. “When it’s flu season, I say to myself, ‘Here comes a lockdown,’” one man told Haines. He described filling his mouth with cold water when he had a fever and a nurse came to take his temperature. “Anything to stay out of The Hole,” he said.

To counter this risk, Amend urges facilities to do everything possible to make the experience of medical isolation feel nonpunitive, including providing those in short-term medical quarantine with access to regular amenities, canteen, personal hygiene supplies and other personal property, and communication with family and friends outside. In a diagram released today (see below), Amend clearly outlines the distinctions between solitary confinement and medical isolation.

Amend is not alone in its concern that COVID-19 will lead to an increase in the use of solitary confinement. In its coronavirus guidelines for correctional facilities, the Vera Institute of Justice, which has worked for years to reduce the use of solitary, states: “Using cells designated for solitary confinement is not acceptable. Rather, separate spaces for people with coronavirus should be prepared with access to comfortable furnishings and personal belongings, a telephone, and programming, even if that programming is done via videoconference or another technology.”

The United Nations Subcommittee on Prevention of Torture (SPT) also issued similar advice in a coronavirus document, stating that correctional facilities must “prevent the use of medical isolation taking the form of disciplinary solitary confinement.” It continues: “Medical isolation must be on the basis of an independent medical evaluation, proportionate, limited in time and subject to procedural safeguards.”

In addition to humanely quarantining those with the virus, facilities need to reduce the need for medical quarantine by limiting its spread. Amend recommends organizing those remaining into “mini-communities,” who live near each other, recreate together, and practice “absolute social distancing” from other groups. This means serving meals in-cell, and allowing everyone the option of remaining in-cell if they want to, without losing other privileges and amenities. It also means issuing everyone—both in and out of quarantine—cell phones or tablets that are pre-programmed with approved numbers and email addresses, to allow people to maintain crucial contact with loved ones without using communal phones—including the many contraband cell phones that are already being passed around most correctional facilities.

Amend, Vera, and the CDC each recommend a host of other preventative measures in correctional facilities, including the regular disinfection of communal surfaces, increased laundry services, staggered visits to recreation spaces and dining areas, increased distance between bunks, and free soap and sanitizer. Other recommendations include limiting contact between officers, prioritizing testing and contact tracing, and limiting transfer between facilities. Educating incarcerated people about COVID-19 and the medical reasons behind any new housing arrangements both shows respect and increases the likelihood of compliance..

One belief shared by all advocates is that governments and facilities have to act quickly. Amend warns: “As the epidemic rapidly worsens, the narrow window of opportunity to implement effective prevention and mitigation strategies on behalf of people living and working in U.S. jails and prisons is quickly closing.”

Most also agree that the pandemic will permanently alter the U.S. criminal justice system, along with many other public institutions. Some of these changes—such as a possible permanent decrease in the prison and jail populations—could prove positive. But advocates will need to be vigilant to ensure that the virus does not reverse their hard-won progress in reducing the use of solitary confinement. 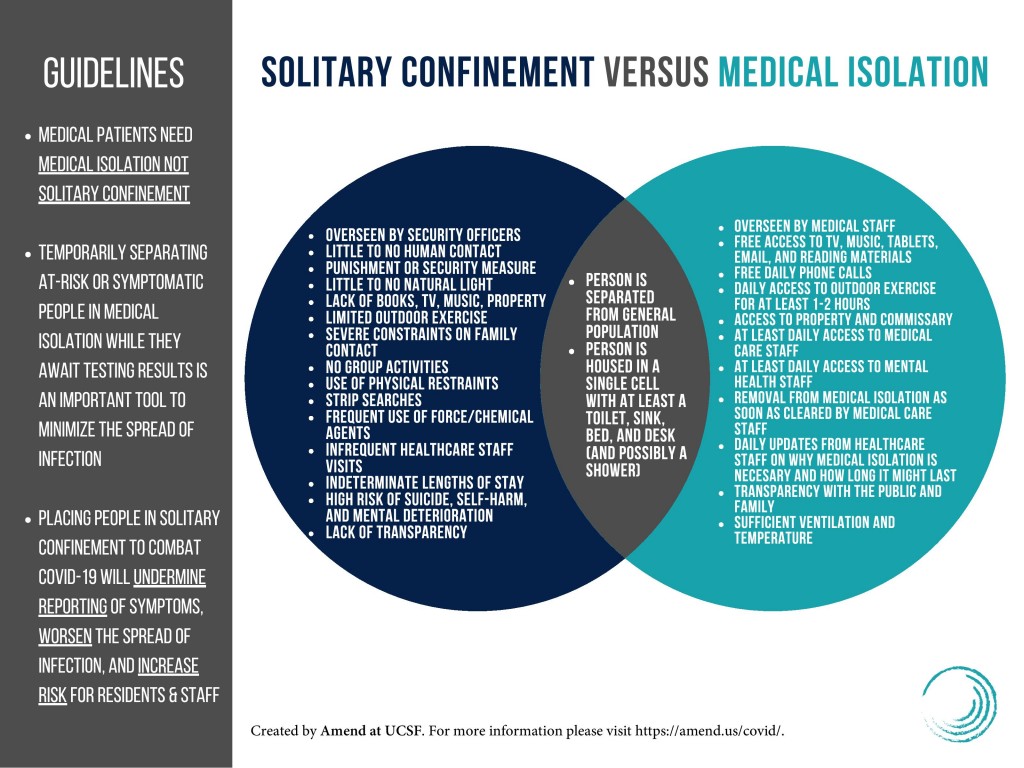