This article originally appeared in them.

When advocates rallied earlier this month for an end to the use of solitary confinement in New York City jails, one of the names they evoked, on signs and in speeches, was Layleen Polanco. A 27-year-old transgender woman and well-known figure in the New York City ballroom scene, Polanco was found dead in her solitary confinement cell on Rikers Island on June 7, less than 10 miles from where millions gathered that month to celebrate World Pride.

First arrested in April for a misdemeanor assault charge, Polanco was then held on $500 bail due to a previous sex work-related arrest. Unable to pay, she was subsequently placed in the transgender unit of a women’s facility on Rikers Island, and later sent to solitary confinement following an alleged fight—all without being convicted of a crime. Rikers officials have provided few details on how Polanco died in their custody, and temporarily moved prisoners from the women’s solitary unit in the wake of her death. But as tragic and likely preventable as it was, to many it came as no surprise: transgender people, and especially women of color like Polanco, are routinely swept up in the criminal justice system and subject to its most violent practices at rates far higher than their white or cisgender peers.

Transgender women of color face a range of abuses in corrective custody, from sexual assault to verbal harassment. Prison officials often exacerbate the problem by assigning transgender people to facilities that don’t match their gender identity, then cite those very abuses as rationale for the form of violence that may have ultimately killed Layleen Polanco: prolonged solitary confinement.

While it is difficult to accurately track the number of transgender people who end up in solitary confinement during incarceration, a 2015 report by the LGBTQ+ prison abolitionist group Black and Pink found that 85 percent of incarcerated LGBT respondents had been in solitary at some point during their sentence.

Transgender individuals often end up in solitary confinement for disciplinary reasons directly or indirectly related to their gender identity. Many prisons may categorize items used to express gender identity as contraband, the possession of which can lead to punitive isolation. One woman in a men’s prison in Nevada received 60 days in disciplinary segregation for wearing a cut-up tank top and two pairs of socks as a makeshift bra, a violation deemed “possession of contraband.” Others, like Polanco, end up in punitive isolation in response to other alleged rule violations—unsurprising given the rampant levels of violence against transgender people in prison and lack of effective safety protections. But perhaps most shockingly, many transgender people find themselves in indefinite, prolonged solitary confinement—conditions classified by the U.N. as torture—ostensibly for their own protection. While some people voluntarily opt in to “protective custody” for their own safety, prison officials often use such administrative segregation to isolate transgender individuals at will, with little to no judicial oversight.

Although protective custody is not supposed to be punitive, people housed there endure the hallmarks of solitary confinement, including a lack of access to programming and meaningful human interactions. For example, a recent report from the Vera Institute of Justice found that housing units used for protective custody in Louisiana “are similar to other types of segregation.” And when Solitary Watch surveyed people in solitary in Louisiana for a recent report, one man wrote that “in protective custody you don’t have no rights, a jumpsuit, nothing, no towel… Can’t leave my cell without restraints. [After wearing restraints] my ankles have bled. I have went over a month without towel or hygiene.” 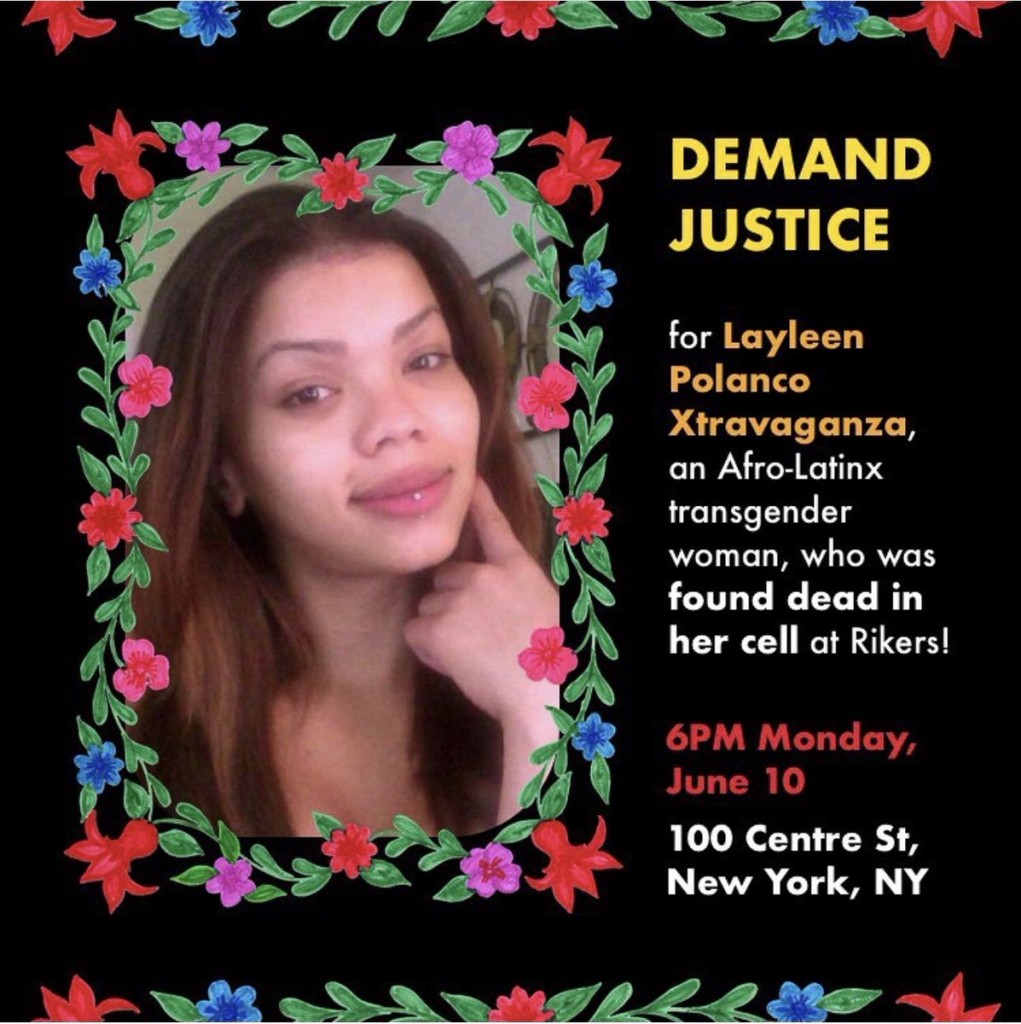 While some people do request to be housed in protective custody for their own safety, such as former law enforcement officials, potential witnesses, or others fearing violence and harassment in general population, the decision is exceedingly rare and made out of desperation. Typically, transgender individuals in protective custody are not there because they chose to be, but because prison officials placed them there. Black and Pink found that half of LGBT respondents who had spent time in solitary were there in some form of involuntary protective custody. Dean Spade, activist and law professor at Seattle University of Law, told Solitary Watch that being placed in solitary exposes transgender individuals to “increased vulnerability to assault by guards” and “can worsen the psychological impacts of being caged and decrease access to programming and social support,” leading to longer sentences.

This routine placement of transgender individuals in what amounts to solitary confinement simply for being transgender—even as a misguided safety measure—is, on paper, illegal under the 2003 Prison Rape Elimination Act. PREA forbids the placement of transgender people, or other people uniquely vulnerable to sexual assault, in protective custody except as a last resort, and specifically requires an individualized assessment to determine the particular needs for each person. It further requires that any person placed in isolated confinement following that assessment receive “access to programs, privileges, education, and work opportunities to the extent possible,” and sets limits on how long such confinement can last.

A driving factor behind the overuse of protective custody is the rampant misclassification of transgender people entering jail or prison. Layleen Polanco’s placement in a facility that corresponded to her gender identity was actually exceedingly rare: In October 2018, New York City became only the third major city in the country to house jailed transgender individuals according to their gender identity. Elsewhere in the country, in contrast to what PREA demands, individuals are almost uniformly housed according to the sex they were assigned at birth, exacerbating a crisis in which 34 percent of incarcerated transgender individuals experience sexual assault.

Journalist and activist Aviva Stahl explained to Solitary Watch that solitary confinement cells are just one battleground in a broader “culture war” over the difference between sex and gender and who gets to define each. Stahl pointed to a coalition that’s emerged in recent years, of reactionary self-described feminists and members of the Christian Right, seeking to narrowly re-define gender based solely on biological anatomy, rather than identity and expression. The battle of who belongs where has most recently and visibly played out in bathrooms and the military, but it is a much broader political struggle, according to Stahl, and has everything to do with why trans people end up solitary confinement at astronomical rates.

“If you look at the Fleming lawsuit, you’ll see that the Trump administration and TERFs [trans-exclusionary radical feminists] are already working together to keep trans women in men’s prisons by arguing that sex and gender are one and the same,” said journalist Aviva Stahl. “It’s important to understand that this discursive debate—about what gender identity is, and who gets to define it under the law—has real-life consequences, and with every inch of ‘progress,’ the Trump administration is able to keep more trans women in the box.”

Though prisons most often determine housing for transgender people based on genitalia, the law actually demands “a case-by-case approach” and a more flexible and nuanced review. Just as PREA requires an assessment before someone can be placed in protective custody, it also requires an individualized assessment of whether someone should be housed in a men’s or women’s facility. At the very minimum, officials must “consider on a case-by-case basis whether a placement would ensure the inmate’s health and safety” and must give “serious consideration” to the person’s “own views with respect to his or her own safety.” The National Center for Transgender Equality has recommended that they also include a number of other factors, including the “individual’s social gender role in the community, and the views of medical and mental health staff regarding the impact of placement on the person’s mental health.”

These requirements, however vague and imperfect, are often flagrantly ignored by prison and jail officials. In 2018, the Trump administration’s Federal Bureau of Prisons gutted its own Transgender Offender Manual in seeming violation of PREA standards, and now mandates that people in federal prisons are housed in accordance with their gender identity only “in rare cases.” The change was in part a response to a lawsuit brought by a Christian legal advocacy group on behalf of four cisgender women who alleged their Constitutional rights were violated when they were housed with other women who are transgender. It is not yet clear whether the recent changes will override PREA’s protections or merely create legal confusion—either of which only promise continued mistreatment.

In many ways, Layleen Polanco’s case was a positive exception to the typical experience of a transgender individual entering jail or prison: She was placed in a facility that matched her gender identity, in a unit supposedly designed to meet the needs of transgender people. In May, just one month before Polanco’s death, an official testified that the unit “has set the national standard for transgender and intersex housing in jail facilities.”

But Polanco’s story underlines the dangers of solitary, even within a special unit designated for transgender people. Supposedly progressive reforms failed to protect her from the damage of isolation. As Spade explained to Solitary Watch, “Ultimately, imprisonment is inhumane and harmful, and there is no such thing as a ‘safe’ prison or jail for trans people. Instead, advocates [should] fight to get people out of prison, to stop widespread practices of torture in prisons like the use of solitary confinement, and to deal with immediate conditions facing individual people like trying to access food, showers, or health care.”

In the wake of Polanco’s death on Rikers Island, a member of New York City’s Board of Correction said it was considering solitary reforms inspired by the HALT Solitary Confinement Act, a progressive state bill that lawmakers failed to bring to a vote in Albany last month. Governor Andrew Cuomo derailed the legislation in a last-minute backroom deal, in part because it would have sharply restricted solitary not only in state prisons but in local jails, which argued they lack the resources to create viable alternatives. Cuomo also faced political pressure to veto the bill from the state’s correctional officers and law enforcement union, which enjoys enormous political influence in the capital.

But New York City advocates have now doubled down, demanding an end to virtually all solitary confinement on Rikers. In the weeks after Polanco’s death, the New York City Anti-Violence Project, with Polanco’s family and a coalition of activist organizations, sent a letter to Governor Cuomo and Mayor DeBlasio with a comprehensive list of demands for reform at the city and state level, including an expedited investigation into Polanco’s death, systemic solitary confinement reform, and an investment of “significant resources in the health and well-being of trans, gender non-conforming, and non-binary Black, Latinx, and people of color.”

Earlier this month, a coalition of community groups organized a protest outside the New York City Board of Corrections prior to its monthly meeting. Solitary confinement survivor and activist Roger Clark told the board, “I spent over five years in solitary confinement but even one day can be torture. Some days, the walls of my cell seemed to close in on me. Imagine being stuck in an elevator—for hours, let alone days or weeks or months or years. All day and night, people would bang on their lockers and scream in agony.”

In the days following Polanco’s death, the other women held in the solitary unit where she died were granted an emergency “conditional release” into general population, pending an investigation. In their list of demands, the Anti-Violence Project and the coalition behind their advocacy letter demanded that the women remain out of isolation until all such facilities on Rikers are closed. This month, however, the DeBlasio administration re-opened the facility, and the Department of Corrections returned eight women to isolation.