By Joshua Manson and Jean Casella |

UPDATE, June 20, 11:45 pm—As New York’s legislative session was extended by one day, members of the #HALTSolitary Campaign entered the eighth day of their hunger strike, which had grown to include at least 40 people. They continued to press legislative leaders to bring the HALT Solitary Confinement Act to a vote, but leaders of the both the State Senate and the Assembly, by all accounts under pressure from Governor Andrew Cuomo, refrained from doing so, and by late evening it was clear that the bill’s chances had run out.

By that time, journalists on hand at the capitol were reporting on social media that an agreement had been reached between the governor and the Assembly and Senate leaders to sideline the HALT Solitary Confinement Act in exchange for a set of much more limited reforms to be “implemented administratively” by the New York Department of Corrections and Community Supervision (DOCCS). Earlier in the week, Governor Cuomo had told the press that while something should be done about solitary, the HALT Act was unacceptable because it would force the construction of new prisons and jails at a cost of more than $1 billion—a claim strongly disputed by the #HALTSolitary Campaign.

Members of the #HALTSolitary Campaign gathered in Albany—including several people who had themselves spent years in solitary confinement, as well as the parents of a young man with mental illness who had killed himself in solitary—issued the following statement:

Shortly before midnight, New York Law Journal reporter Dan Clark tweeted what he said were details of the agreement reached on solitary confinement. The document he shared lays out a goal of a 30-day limit on solitary, but with no schedule for implementation other than “eventually.” It briefly outlines other plans in similarly vague terms, leaving it impossible to fully evaluate. Clearly, the agreement, which covers only state prisons and not local jails and appears to leave much to the discretion of DOCCS, offers only a fraction of the protections found in the HALT Solitary Confinement Act. It will also lack the clout, permanence, and oversight mechanisms that would have been found with legislation, as opposed to an administrative process left entirely to the prison system and the governor’s office.

Original Article, June 14—As New York State lawmakers prepare to leave Albany for the summer, advocates have stepped up pressure to end prolonged solitary confinement in New York by beginning a hunger strike that, if legislators fail to act, could last through the end of the legislative session.

The #HALTSolitary Campaign, organized by the New York Campaign for Alternatives to Isolated Confinement, announced the coordinated effort by survivors of solitary confinement and their allies in the state Capitol building in Albany on Wednesday. The hunger strikers are seeking secure strict limits on the use of solitary confinement in New York’s state prisons and local jails through passage of the Humane Alternatives to Long-term Solitary Confinement Act, or HALT Solitary Confinement Act, a far-reaching reform bill currently awaiting a vote in both houses of the New York State Legislature.

In choosing to go on hunger strike, participants—who currently number about 20 and are encouraging others to join them—point to the United Nations’ denunciation of prolonged solitary confinement as torture, which they say demands a powerful moral and strategic response. This week’s strike builds on a long tradition of individuals in prisons protesting inhumane treatment by exerting control over the one aspect of their lives that they still can: their food intake. Activists incarcerated in Northern Ireland famously went on hunger strike in the early 1980s. More recently, in the United States, more than 30,000 individuals in prisons across California refused their meals in 2013, many for nearly two months, to protest the use of long-term solitary confinement at Pelican Bay and other state prisons. The California strike attracted significant media attention and helped pressure the state correctional department to settle a class action lawsuit and agree to transfer thousands of people out of isolation. 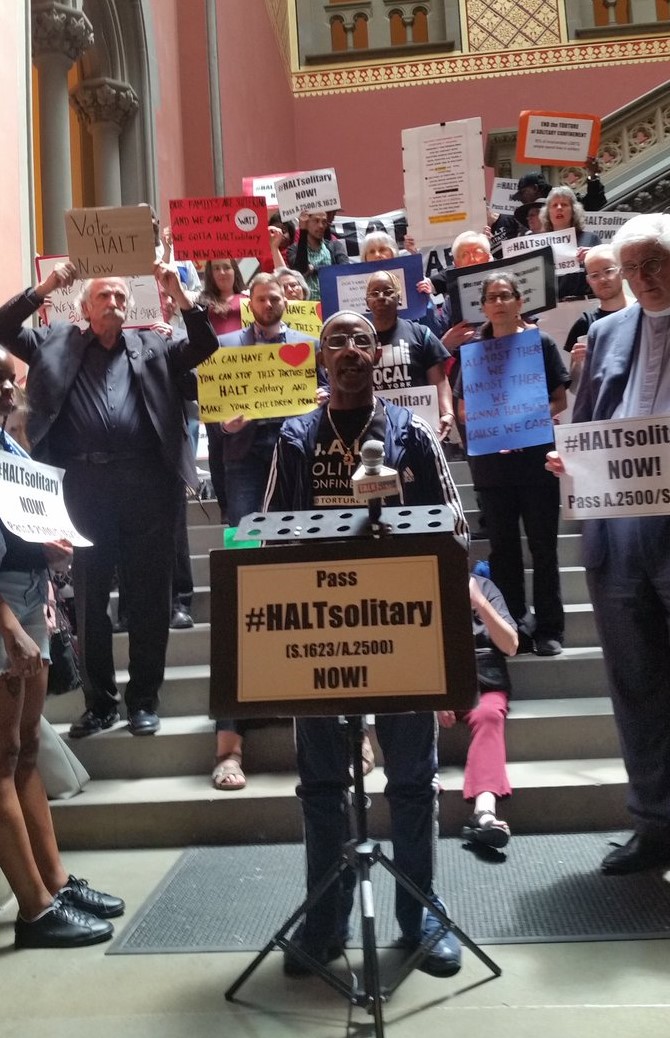 Victor Pate, Campaign Organizer for the #HALTSolitary Campaign, announces the strike in the New York State Capitol in Albany on June 12.

Five Mualimm-ak, an activist and organizer who spent years in solitary confinement while incarcerated in New York state, told Solitary Watch that he is participating in the strike to mirror the torture that is carried out in prisons and jails. “We [will be] suffering just like they are. It’s a physical representation of that suffering.” Mualimm-ak added that “the reason that we are doing this is because this is what people inside do,” and they often get “no credit and no attention.” Instead, he said, they face retaliation and further punishment when they try to protest their conditions.

If passed, the HALT Solitary Confinement Act would be the nation’s most progressive piece of solitary confinement reform legislation yet to become law. In addition to bringing New York State in line with the Mandela Rules, the human rights standards set forth by the United Nations in 2015, which prohibit isolation lasting longer than 15 days as a form of torture, the HALT Act would ban solitary confinement for certain vulnerable populations, including young and older people; people with psychiatric, developmental, and physical disabilities; people who are or were recently pregnant; and people who isolated for being perceived to be LGBTI. The legislation would also implement a number of humane and effective alternatives to isolation. Notably, it would reach much further than previous reforms triggered by the 2015 settlement of a lawsuit with the New York Civil Liberties Union, and would extend to those held indefinitely in “administrative segregation.”

Last year, the HALT Solitary Confinement Act passed in the New York State Assembly but failed in the State Senate. Advocates have since found hope in the wave of progressives elected last year and the break-up of the Republican-aligned Independent Democratic Conference, which helped the bill secure wider support in the Senate. With 33 co-sponsors in the Senate and 79 in the Assembly, the HALT Act now has more than enough votes to pass—but that can’t happen unless party leaders call the bill for a vote.

If the HALT Solitary Confinement Act makes it through the legislature, it will face a final obstacle at the governor’s desk. Governor Andrew Cuomo, who has publicly recommitted to criminal justice reform this year, has not indicated whether he would stand up to the influential correctional officers’ union and its allies in upstate communities by signing the bill into law. Rather, earlier this year—and presumably in response to the HALT Act’s political momentum—Gov. Cuomo proposed a far more modest set of solitary confinement reforms that advocates have said has “severe limitations.”

When reached for comment, a spokesperson for Governor Cuomo extolled those proposals as well as past reforms and added that they “of course remain engaged with the legislature on any additional reforms that can be operationally and fiscally implemented.” The offices of Senate Majority Leader Andrea Stewart-Cousins and Assembly Speaker Carl Heastie did not respond to requests for comment.

The New York State Legislature has until the end of the legislative session, Wednesday, June 19, to bring the bill to a vote. Once the session ends, lawmakers will not meet again until January, and advocates say they are determined not to allow the thousands of people currently in solitary confinement in New York—some of whom have been isolated for as long as 30 years—to wait another six months “with no hope on the horizon.”