Voices from Solitary: "Breathtakingly Irresponsible"
An Open Letter to New Jersey Governor Chris Christie from a Survivor of Solitary Confinement

Marshall Justice Rountree served 23 years in New Jersey’s prisons. He spent several of his years behind bars helping other incarcerated men as a prison paralegal, and built relationships with advocacy networks and organizations. Rountree believes these activities led to him being targeted and placed in solitary confinement. Immediately upon his release in June of this year, Rountree began speaking about his experiences and organizing for social and institutional change. He now works closely with advocacy groups on a number of projects and campaigns including the Prison Watch Program of the American Friends Service Committee, and the New Jersey Coalition for Alternatives to Isolated Confinement (NJ-CAIC) through the National Religious Campaign Against Torture.

In the following open letter, Rountree refers to New Jersey Governor Chris Christie’s recent veto of a bill that would have placed significant restrictions on the use of solitary confinement in the state’s prisons. In a statement accompanying his veto, Christie attacked the legislators and advocates who had supported the bill, and made the claim that solitary confinement was rarely used in New Jersey prisons. His claims are directly contradicted by data published earlier this week, which show well over 1,000 people in solitary, most for months or years. –Jean Casella

Your recent veto of the Isolated Confinement Restriction Act (S.51/A.547), which arrived at your desk after advancing through both houses of the New Jersey legislature this year, was, indeed, to borrow your term, breathtaking. Solitary confinement does exist in New Jersey despite your contention to the contrary.

I would know. I am Marshall Justice Rountree, #923025B. I was a prisoner in your state prisons for 23 years, several of which were spent in isolation units.

I lived in dingy cages the size of a small bathroom, and I spent hours staring at the walls that were coated with decade’s worth of filth and grime. I tasted the dust that was in the air every time I inhaled. I ate the unidentifiable, cold food just so that I could survive. I slept with rats. I smelled the sewage. I struggled to breathe in the summer months, and I shivered all night through the winter. 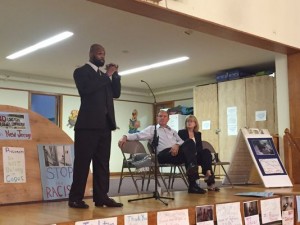 Marshall Justice Rountree speaks on a panel with state legislators about his time in solitary confinement (Photo: Susan Loyer/MyCentralJersey.com)

I have been denied long-awaited showers at the spiteful whims of correctional officers. I have experienced the devastation of having my weekly two hours of “yard time”—my sacred ritual of free movement—canceled without reason or apology. I know that isolation means extreme loneliness—the kind will make you ask yourself if anyone cares about you, or if life is even worth living. I asked those questions. I carry with me the names of young men who ended their lives early, and I still hear the voices of strong men who suffered mental breakdowns. And even though I survived, I can never forget what it feels like to be stripped of everything that makes me feel human. Malnourished. Isolated. Forgotten.

In your veto memo, you described this bill and its advocates as “breathtakingly irresponsible.” What I find breathtaking is your disregard of the research and advocacy framing this legislation, including research from the American Psychiatric Association, standards by the United Nations, and recent statements of Pope Francis. “Breathtaking” is the best word to describe the shameful reality that New Jersey ranks dead last among all states for racial disparities in criminal justice sentencing. It is breathtaking that you make confident statements about correctional procedures and safeguards that would never be corroborated by those who have witnessed the “prison inside the prison.” You say that solitary confinement doesn’t exist here, but if the citizens of New Jersey could personally witness the “housing” conditions and treatment of prisoners in these cells—the administrative segregation units, the management control units, and other close custody units—the sights, sounds, smells, and pervasive hopelessness would be enough to take their breath away.

S.51/A.547 represented a milestone effort to replace harmful correctional practices with innovative practices that restore and rehabilitate. And, true to your political track record, you opted to score political points by diminishing the real suffering of human beings, and you did so by lying to us.

Solitary confinement is real, Mr. Christie, despite the claims or the names that the Department of Corrections uses to mask its usage.

We will not forget those who still languish in isolation cells. Our justice movement is growing, and the tremendous success of this legislative campaign cannot be diminished by one veto or condescension. We choose people over politics, and in the end, it will be the resilience of our spirits and the success of our cause which will truly be breathtaking.

One thought on “Voices from Solitary: "Breathtakingly Irresponsible"”