Writer in Solitary Confinement Is Barred from Reading His Own Book
New York Prison Officials Say Anthology of Writings on Solitary Could Incite “Lawlessness, Violence, Anarchy, or Rebellion”

After spending nearly three decades in solitary confinement, William “Billy” Blake has learned a few things about staying sane. For Blake, who is serving a sentence of 77 years to life in conditions known to cause psychological breakdown, self-harm, and suicide, sanity is survival. He reads, he dreams, but most of the time, he writes.

Save for occasional pro forma reviews of his status, Blake is on permanent escape watch for the duration of his sentence, meaning he’ll likely spend the rest of his life in solitary confinement. He was incarcerated at age 23 after attempting to escape from court, where he was appearing on a drug charge. In his failed attempt to flee, he grabbed a gun, killing one officer and injuring another. Blake is now serving his 29th year in solitary, and spends at least 23 hours a day in a small concrete cell with a solid steel door.

One of Blake’s essays about living in isolation, “A Sentence Worse Than Death,” was published in the first anthology of narratives about solitary. Although the book, titled Hell is a Very Small Place: Voices from Solitary Confinement, was released in February, Blake has yet to hold a copy in his hands.

Jean Casella, co-director of Solitary Watch and co-editor of the book, reports that two copies of Hell Is a Very Small Place were mailed to Blake at Great Meadow Correctional Facility in upstate New York, where he is currently incarcerated. They were sent directly by the publisher, in accordance with policies laid out by the New York State Department of Corrections and Community Supervision (DOCCS), but the copies never reached him.

Great Meadow Correctional Facility—referred to by most individuals serving time there as “Comstock,” after the small town where it is located—forwards all books entering the prison to the Facility Media Review Committee (FMRC). In deciding whether to allow access to a publication, the FMRC operates under a code of directives, or rules. After the evaluation, incarcerated individuals are issued an Inmate Disposition Notice, informing them of the FMRC’s decision. 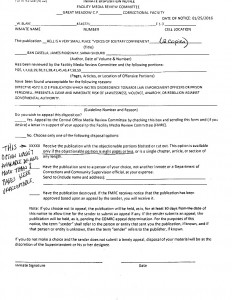 Weeks after it was sent to him, Blake received a notice informing him that he was being denied access to his book.

The reason for the denial of Blake’s book reads: “Publication which incites disobedience towards law enforcement officers or prison personell [sic], presents clear and immediate risk of lawlessness, violence, anarchy, or rebellion agiainst [sic] governmental authority.” The notice flags fourteen page numbers but fails to mention the content in violation or where on the pages that content can be found—both of which are required by DOCCS Directive 4572.

The first flagged page is part of co-editor Sarah Shourd’s preface to the anthology.  On this page, she recounts her visit to Blake in prison.  She recalls his huge grin, lively gestures, and long-winded storytelling.  She wonders whether people on the outside would begin to question solitary confinement if they met Blake. A correctional officer declines to comment but implies he feels similarly.

There is no violent content on this page.  There is not one word encouraging disobedience or rebellion–unless Blake’s smile is an example of lawlessness, or a guard’s sympathy is evidence of anarchy.

Page 8 is part of the introduction by Solitary Watch’s Jean Casella and James Ridgeway. On it, they share purely factual information about solitary confinement in prisons across the country.

Surprisingly, three pages (29-31) of the essay Blake wrote himself are considered too dangerous for him to read. On page 29, Blake talks about hope, and what happens to it after 25 years in an isolation cell in the so-called Special Housing Unit (SHU).  He writes that he has felt boredom and loneliness so intense they have nearly choked him. He tells about the sounds of men going crazy in adjacent cells, some of whom commit suicide because the SHU is too much to bear.

Blake writes that he knows what isolation does to “that immaterial part in our middle where hopes survive or die and the spirit resides.” His narrative is honest, philosophical, and heart wrenching.

On page 30 Blake laments that the SHU “is sorely conducive to an exceedingly hot sort of anger.” On page 31, he admits he has been guilty of the anger too, sometimes so fed up with the noise that he hated the men going crazy in cells near his. Blake writes that he was afraid of these angry thoughts, but he was always most angry with himself.

Pages were also flagged in three more narratives: C.F. Villa’s, “Living in the SHU”; Uzair Paracha’s “Innocent in the Eyes of the Law”; and Judith Vazquez’s “On the Verge of Hell.”

According to Blake’s letters to Solitary Watch, after he was denied the copies of the book, he was given the option to either mail them to someone else, or have them destroyed. Typically, an individual can receive books with the flagged pages torn out, but the objectionable portion of Hell Is a Very Small Place exceeded the limit.

Blake reports that the chairperson of the FMRC instructed him to transfer the books to a visitor, but even after Blake received the necessary approvals and followed protocol, the chair repeatedly neglected to transfer the books. Prison staff mentioned to Blake that they had read his essay, leading him to believe the chair was lending his books to others.

Commenting in a letter on the accusations against his writing, Blake insists: “All my essay does is tell of my life in the box, what I’ve seen, what I’ve been through, what I’ve felt.”  Blake continues, “That essay is about as gentle as I could be.”

Blake believes it is possible that the denial of his book has more to do with a desire for retaliation against him for his growing notoriety as a writer than it does with code violations or actual threats to security.

Before it was published in Hell Is a Very Small Place, the essay “A Sentence Worse Than Death” appeared on Solitary Watch’s website in 2013. The piece went viral, receiving over half a million views. Letters to Blake from all over the world began pouring into Elmira prison, where he was then being held. In 2014, DOCCS moved him to Great Meadow. As is generally the case with prison mail, letters have not been forwarded. Most of his collection of books, as well as the 1,400-page handwritten manuscript of a novel he was working on, were thrown away in the move.

Blake also told Solitary Watch that this is not the first time he has been denied a publication. Recently, he was denied access to an Atlas that he has had with him in every prison in which he has spent time. He never received the notice of the FMRC’s decision, but was charged $14 anyway to mail the book home without the opportunity to appeal.

Despite his experiences, Blake describes himself as an optimist and a dreamer. His letters are peppered with smiley faces; he is funny, sarcastic, and loves to talk. He is fascinated with science and philosophy, and although Blake has had trouble finding inspiration at Comstock, he is ten chapters into writing a memoir.

And while he rarely likes the poetry he writes, he loves his recent poem “Evolution.” One line reads: “Man was born with the urge to roam: / Asia, Europe, sites far and wide, / the ocean depths, the starry sky.”

Hell is a Very Small Place is dedicated, in part, to Billy Blake, and he would someday like to open up a copy of the book and see his name in print