"This Is a Public Safety Approach": Solitary Confinement Reform Begins in Idaho

Kevin Kempf is the Director of the Idaho Department of Corrections. Since he first joined the DOC over twenty years ago, Kempf has served in a variety of positions, including correctional officer, parole officer, warden, and chief of prisons. Kempf was appointed to his current leadership role in December 2014, and currently oversees Idaho’s 9 prisons and the 22,000 people locked up inside their walls.

Idaho’s prisons have sometimes come under public criticism.  In May 2014, the FBI launched an investigation into the private prison company Corrections Corporation of America (CCA), after publicized videos of a beating, and a prisoner lawsuit, exposed the high levels of violence at the Idaho State Correctional Center. The state subsequently ended its contract with CCA, so the DOC now operates the facility, although levels of violence at the prison appear to remain high.

Since Director Kempf came into office, he has overseen several reforms, including a “Justice Reinvestment” project to reduce the number of people incarcerated by the state, and a Justice Program Assessment to reevaluate and revamp the DOC’s substance abuse and sex offender programs.

Restrictive housing reform is also underway. Last September, under Kempf’s leadership, the Idaho Department of Corrections took a big step in barring the use of “dry cells” — a type of cell without beds, sinks or toilets.

Solitary Watch interviewed Director Kevin Kempf in April 2016, when he spoke at the Students for Prison Education and Reform (SPEAR) Conference in Princeton, NJ. We learned about what the DOC has already achieved in its effort to reduce the use of isolation, as well as the truly monumental changes Director Kempf envisions for the future. 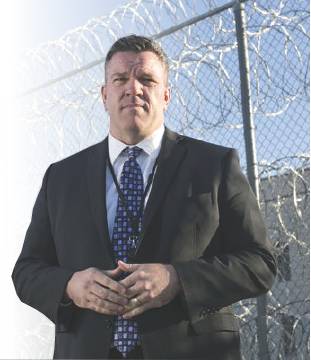 Aviva Stahl:  Let’s talk about when you took the step of barring the use of dry cells. I’d love to hear about kind of what the reaction was from the public, from guards, from officials, and of course from prisoners.

Kevin Kempf: The reaction, believe it or not, was two things. It was positive reaction, certainly from our advocacy groups and things like that. But I think there was a lot of surprise. Like I mentioned earlier, our industry, not just in Idaho but across the country – we’re just secretive and we’re closed off and we’re not very transparent. So when I publicly said that we had inmates that were in a dry cell setting, in some cases for months, I think that shocked people. I don’t think they believed that was happening in Idaho.

I certainly have some critics out there that have reached out to me on social media, people that have been in the correctional system 20+ years. They believe that that decision was pandering towards a left wing approach or whatever.

And my response back to them each time has been – I just feel like we can do better.

AS: Tell us about how many people are in isolation in Idaho.

KK: When we first started segregation reform, which was just a year ago, we had 410 segregation cells and now we’re below 300… Where we used to put inmates in segregation if they broke the rules or something like that, now we’re doing other things to hold that offender accountable, in a more humane way.  It’s pretty cool.

And our goal, and we believe it will be completed by 2017, our goal is to completely eliminate putting an offender, an inmate, in a segregation cell for any type of rule violation. So that the only type of inmate that will still have in a temporary segregation cell, is an inmate that has demonstrated a true threat to other inmates or to a staff member. But even then, we’re going to follow the Mandela rules, which say that if you put an inmate in a segregation cell, in solitary confinement, for more than 15 days, that’s considered torture.

AS:  It’s pretty incredible to hear you say that, since in a lot of states, if you try to kill a prison guard, for example, you’ll probably be confined to solitary for the rest of your life. Do you have something in mind for what you will do with those guys after the 15 days?

KK: We’ll take those situations as a case by case, honestly. We really don’t want to put any hard and fast rule out there to say that this is what we’re going to do if this happens. There are states that are ahead of us: Colorado, Washington. They’ve been doing this restrictive housing reform for a couple years now. What’s cool about that is it allows us to see that they have significantly reduced their segregation use and beds but at the same time all of their inmate on inmate violence has gone down, all of their inmate on staff violence has all trended down.

That’s powerful data when I’m going down talking to correctional officers about popping those guys out. I can say with good data and research that believe it or not, our violence is going to go down. Staff can be fearful.

An absolute mistake I could make is communicating with those staff members while sitting in my air-conditioned office. Not only am I touring these segregation units, but I’m putting a uniform on and working shifts shoulder to shoulder with our IDOC staff members in segregation. They need to see me putting belly chains and leg irons on inmates and taking them to the showers – and at the same time I’m talking to these inmates about restrictive housing reform and asking them what types of things should we do to help you want to get out of here.

I just had this group of inmates, these are all segregation inmates that had just come out, so I went and sat down with them. Probably 4 out of the five of these guys were hardcore Aryans, gang members. I asked them, I said, “This is what we’re trying to do for restrictive housing. You guys are examples of that – you’re out of restrictive housing now. What are your thoughts? What types of things should we be doing, what shouldn’t we be doing?”

And you’d think I would know this, but it was a light bulb moment when they said, “You are taking us out of a single cell, you’re putting us into a double cell. Yes, it’s a lower custody level, but we’re not getting out of our cells long enough to feel the impact.”

It was really interesting to see that, so that allowed us to step back and take a look at exactly what we’re doing with our step down program. We were able to go back and increase our out of cell time and make sure that for an inmate that is going from a single cell – and inmates enjoy that, just like I would – and go into a double cell, we gotta make sure that they’re out in the day room, they’re out in the rec yard, way more than they have been in the past. Otherwise it’s not going to work very well. And that’s what they told me, and that was a light bulb moment to hear.

AS: Could you talk more about the kinds of alternatives to isolation you envision, or that are already in place in Idaho?

KK:  As I mentioned earlier, today we just have a system of sticks. We don’t have a lot of carrots. So some of the things that we’ve done in the past few months is we’ve partnered with Pizza Hut, for instance. And Pizza Hut sold us pizzas at $10 a piece, and what we did is we allowed inmates to purchase those for $10. $5 went to Pizza Hut, that’s all they required of us, that’s the partnership piece, and the other $5 went to a victim’s compensation fund. And we did that for inmates who have gone 3 months without a disciplinary offense report. It was funny because the first time we did it in one of our prisons, our inmates didn’t believe us. So when Pizza Hut rolled up there and we were literally passing out these medium size pizzas, the whole yard wanted in. So we’ve done it a second time now at a few of our prisons.

That’s one example of just putting some incentive based things out there… We have some amazing artists throughout our system. So we’re going to be partnering with local school districts for medium custody and below, we’re going to do an “art in the yard” event, where we’re going to be inviting in the outside public, allowing inmates to set up their art, set up their hobby craft and literally display it in our rec yard, and have our public walk through, see it, purchase it. Half of that money will go to the inmate, half of the money will go to that art district’s school program. A total win-win…

AS: Another issue that’s gotten a lot of attention recently is the high number of people being released from prison directly from solitary. How often does that happen in Idaho?

KK: In 2014, this is the latest data that I have, 44 inmates walked out of the Idaho Maximum Security Institution from ad seg. And so that, I’ve said this publicly multiple times this legislative session, is I’m describing to our legislators what restrictive housing really means and why we’re doing it.

This is not a soft-on-inmates approach – this is a public safety approach. Those 44 inmates, we took belly chains and leg irons off of and walked them into your community.

In Idaho, 44 prisoners – that’s a lot, to walk out of ad seg into our communities. We cannot do that. We can’t do that and call ourselves a public safety organization.

One thought on “"This Is a Public Safety Approach": Solitary Confinement Reform Begins in Idaho”