Innocent After Years in Solitary on Rikers, Woman Tried on New Charges for Alleged Misbehavior in Jail 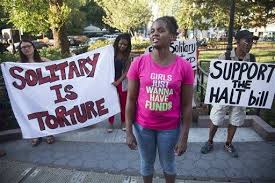 Candie Hailey speaks out at a September 2015 rally held by the New York Campaign for Alternatives to Isolated Confinement.

When Candie Hailey was released from Rikers Island’s women’s correctional facility May 2015, after nearly three years on the island prison, she faced the challenge of putting her life back together. What made her reentry to society even more difficult was the mental and physical torture she endured while accused of a crime of which she was ultimately deemed innocent.

Hailey was accused of attempted murder last year but had all charges dropped after spending 29 months in a jail meant to house prisoners for brief pre-trial periods, or for people convicted of low-level crimes carrying sentences of one year or less. Of those 29 months, 27 were spent in solitary confinement, where she spent 23 hours a day locked in her cell.

Hailey has maintained that her treatment on Rikers was degrading and brutal. “I would say I’ve been through hell and back,” she told the Associated Press. “My soul died but my body is alive.” Since her release, she has spoken widely about the suffering she endured on Rikers, and become a dedicated advocate for ending solitary confinement.

But although she may have been done with Rikers, Rikers wasn’t done with her. Prosecutors continued to press felony charges against Hailey for alleged infractions while she was incarcerated, threatening to send her back to prison.

The 32-year-old Hailey stood trial Monday on felony charges of several counts of criminal mischief for allegedly breaking a “B.O.S.S.” chair—an acronym for “Body Orifice Security Scanner,” used to scan prisoner body cavities for contraband. The incident occurred as Hailey was let out of her cell for a medical clinic visit.

Hailey exhibited signs of mental health disorders early on in her time at Rikers, and was ultimately diagnosed with borderline character disorder, mood disorder, and anti-social disorder. She would regularly hurt herself by banging her head against a wall and cutting herself. Such behavior would bring a moment of reprieve from solitary when she would be taken to the mental clinic, only to be further reprimanded with more time in solitary for her defiant behavior. After each one of her multiple suicide attempts, officers wrote her a disciplinary ticket, and with each ticket came 30 more days of solitary confinement.

According to experts in the psychological effects are prolonged solitary confinement, Hailey behavioral issues in jail are common results of solitary, especially for those with underlying mental health problems.

At Monday’s trial, The prosecution fell apart after cross examination of Captain Maloney, who was unable to identify the moment when Hailey’s protective mitts were removed. These mitts are secured onto prisoners’ hands with handcuffs to prevent them from being able to punch, hit, or handle objects, and are designed to be only removable by the corrections officer.

“You’d have to be Houdini to get out of those mitts,” said Hailey’s attorney, Patrick Higgins.

The charges came from the office of the newly elected Bronx District Attorney Darcel Clark. Although the charges predate Clark’s ascension to the position, Clark continued with the prosecution. When questioned by Solitary Watch as to why DA Clark felt it was necessary to continue to press charges, a spokesperson for Clark stated only: “The defendant is on trial because she allegedly committed a crime while at Rikers Island. The Bronx DA prosecutes all the Rikers crimes because it is within her jurisdiction.”

“The prosecutors explain the reasoning behind pursuing the charges, and the jury will decide justice” Clark’s spokesperson also stated, despite the fact that there were no opening statements and it was not a jury, but rather a bench trial in which the judge decided the verdict.

Clark had previously been involved in matters of extended pre-trials, notably the case of Kalief Browder, who at 16 years old was arrested for allegedly stealing a backpack and had all charges dropped after three years on Rikers, more than two of them in solitary. Browder killed himself in June 2015 at the age of 22. Activists have also noted the eerie comparison between the Hailey and Browder cases.

Clark was the presiding judge over Browder’s court dates, while Browder’s trial continued to be delayed as he suffered in solitary confinement. Family and friends believe this treatment ultimately contributed to his suicide.

“Honestly, I cannot say that I remember it. I mean, I was there for 13 years. I sat on a lot of cases,” Clark said in a NY1 interview. “But look, the Kalief Browder case is a tragedy. And no one should have to sit in jail for three years on a robbery case, or any type of case. And if I’m elected DA, again, with those internal controls that I expect to institute and the vertical prosecutions, nothing like that will happen.”

Hailey was offered a plea deal that took her charges from a felony to a disorderly conduct violation, which will not register on a criminal record.

“It’s over,” said the presiding Judge Mogulescu. “You can go on with your life now.”

“I just want to go home, not come in for each case,” said Hailey. “If I wasn’t [on Rikers] in the first place, I wouldn’t have charges at all.”

There is still a long road ahead for Hailey, who is still struggling to find housing and regain custody of her two children. But now Rikers, and a life spent wasting away in a solitary cage, may be finally behind her.

2 thoughts on “Innocent After Years in Solitary on Rikers, Woman Tried on New Charges for Alleged Misbehavior in Jail”