This month, advocates and people behind bars received statistical proof for something they have long suspected—that gay, lesbian and transgender individuals in prison are placed in solitary confinement at significantly greater rates than their heterosexual and cisgender peers.

On October 16, the organization Black & Pink released a groundbreaking report, “Coming Out of Concrete Closets,” which examines the experiences of incarcerated LGBTQ people. Almost 1,200 people locked up in federal and state prisons across the country responded to the Black & Pink questionnaire, thought to be the largest-ever survey of queer and trans people behind bars.

A shocking 85 percent of respondents reported that they had spent some time in solitary confinement during their time behind bars. Of those, almost 50 percent had spent two years or more in isolation. 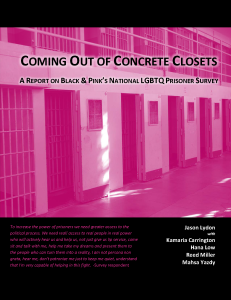 One of the issues highlighted is the report is how many LGBTQ people end up in isolation as a result of abuse endured in general population. “Because the men was making me sell my body and it was the only safe place for me, the prison system won’t help… so I ran to solitary to be safe,” wrote one respondent. Thirty eight percent of respondents report who reported experiencing solitary said they had been “housed in solitary confinement for their own protection and at their request.”

Yet not everyone who ends up in protective custody has elected to be there. Some 50 percent of survey respondents who had spent time in solitary “were put there for their own protection but against their will.”

Another issue highlighted by the report is that LGBTQ prisoners are particularly vulnerable to staff abuse once they are placed in isolation. “I was raped in 2007 by another prisoners, and placed on self-harm observation status because I was feeling suicidal,” read one submission. “The guard assigned to observe me entered my cell after turning the security camera off and coerced me to perform oral sex on him.”

Black, Latino, mixed race, and American Indian respondents were far more likely to report having spent time in solitary than their white peers, and to have been placed in isolation for reasons other than safety. The report also found that people who had been diagnosed with mental illness were more likely to have spent time in solitary confinement.

The Black & Pink report notes that taken together, respondents had spent a total of 5,110 years in isolation.

Although the Black & Pink provides the most in-depth examination ever published of LGBTQ experiences in solitary, the organization’s overall findings have recently been corroborated by other sources. Last week, the Bureau of Justice Statistics also released a report, which tracked the percentage of prisoners who had spent some time in solitary confinement in 2011-2012. According to the BJS report, which is based on a self-reporting survey conducted in state and federal prisons as well as local jails, about 18 percent of heterosexual people held in prisons had spent some time in isolation over the course of the year, compared with 28 percent of lesbian, gay, and bisexual inmates.

Black & Pink describes itself as “an open family of LGBTQ prisoners and ‘free world’ allies who support each other. Our work toward the abolition of the prison industrial complex is rooted in the experience of currently and formerly incarcerated people. We are outraged by the specific violence of the prison industrial complex against LGBTQ people, and respond through advocacy, education, direct service, and organizing.”