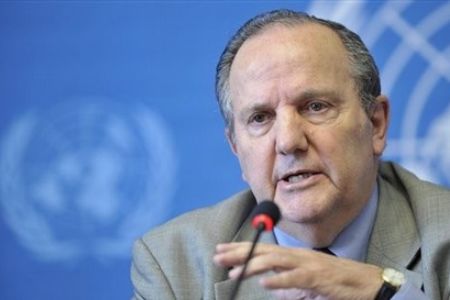 The United Nations’ top experts on the human rights of people in detention are calling on the United States to open the doors of its prisons to an official visit. Juan E. Méndez, the United Nations Special Rapporteur on Torture, and Seong-Phil Hong, the Chairperson of the Working Group on Arbitrary Detention, made the request after President Obama’s historic visit to Oklahoma’s El Reno prison, part of a series of actions to promote criminal justice reform. “We hope the President’s recent actions will ensure concrete steps are taken to facilitate these visits to US detention facilities, including private interviews with detainees,” said the human rights experts in a July 21 press release.

It would be an unprecedented move for the United States to facilitate the requested visit. Méndez has been seeking permission from the U.S. State Department to visit people in solitary confinement for over two years. As UN Special Rapporteur on Torture, it is Méndez’s job to expose torture and monitor progress no matter where it is happening, and in an August 2011 report, he indicated that periods of solitary confinement exceeding 15 days constitutes torture. He has since made solitary confinement a priority, and criticized the United States for its excessive reliance on the practice, though he has yet to conduct an in-person investigation into the issue. His one visit to the Pelican Bay State Prison’s Security Housing Unit in 2014 was arranged outside of typical channels, and he has yet to visit an isolation unit in a federal facility. With current happenings, however, Méndez and Hong are once again pressing for the removal of these barriers to access.

In a speech to the NAACP on July 14, the President emphasized the problems of prison overcrowding, racial inequalities in the justice system, and excessive reliance on solitary confinement. In light of this unprecedented commitment to addressing flaws in the criminal justice system, Méndez and Hong expressed hope that they will be given the opportunity to shape reforms that would bring the U.S. in line with international standards.

In the UN press release, the experts cite two relatively new international standards alongside the Convention Against Torture. One is the UN Standard Minimum Rules for the Treatment of Prisoners, now known as the Mandela Rules, which closes some of the most egregious gaps between human rights and the rights of people in prison and includes limitations on solitary confinement. The other is the recently drafted Basic Principles and Guidelines on the right to anyone deprived of their liberty to bring proceedings before a court. This document was produced by the Working Group on Arbitrary Detention, and is designed, according to Hong, to “help to establish effective mechanisms to ensure judicial oversight over all situations of deprivation of liberty.”

The experts clearly indicated that solitary confinement will be on the agenda for reform. Méndez said that he is looking forward to working alongside the U.S. Department of Justice on a “special study” seeking insights into the regulation of solitary confinement. “The practice of prolonged or indefinite solitary confinement inflicts pain and suffering of a psychological nature, which is strictly prohibited by the Convention Against Torture,” Méndez said. “Reform along such lines will have considerable impact not only in the United States but in many countries around the world.”