Voices from Solitary: Is It Normal to Think That?

This following piece was written by Scott Van Bergen, while he was held at Southport Correctional Facility, a supermax prison in Pine City, New York, where about 700 men are held in isolation in the “Special Housing Units,” or SHUs. It was written in response to an article in a recent Solitary Watch newsletter on efforts by advocates to bring about solitary confinement reform in New York. Van Bergen describes the emotional and psychological tolls exacted by solitary confinement, including the sense of disorientation caused by extended periods of isolation. Yet, like many others in his situation, he describes not wanting to share his suffering with others, even with the mental health worker (“MHU person”) who occasionally stops by his cell. He can be reached by writing: Scott A. Van Bergen 07A6361, Clinton Correctional Facility/ 1156 Rt. 374/ P.O. Box 2001/ Dannemora, New York 12929-2001.  —Maclyn Willigan 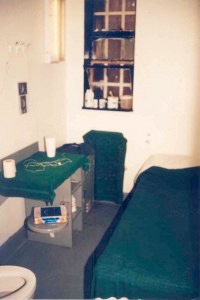 My name is Scott Andrew Van Bergen, I am serving a 15 year sentence in NY. I just read your article today on isolated confinement. Good Work!! Never Stop!

I truly thought nobody on the outside really understands or cares about the type of condition a person is exposed to. Like myself. I am currently doing 18 months at Southport Corr. Fac. confined to a cell no bigger then ones bathroom at home. 23-24 hours a day. Locked in the cage! Sometimes you don’t get your one hour recreation in a cage smaller then my cage I sleep in. Depends on the CO.

There are times how I think it’s not at all bad doing months on end in Southport, SHU. And then there are times I think, Is it normal for me to think that?? I have lost all communication skills. I mean I have the very little I’ve kept. I don’t even want to talk to any body at many times. I don’t even want to talk to a MHU person [mental health worker].

I feel like a caged in animal. Get treated like an animal. At times I can buy candy bars on Level 3 after being a good boy for several months. I feel like a dog who gets treats every once in a while. I receive my food through a feed-up slot, (like a caged in animal) in old dirty trays that have been around for years. No telling what kind of germs are on the trays. I’ve gotten so paranoid. I switched to kosher food. That way I felt a[t] piece with myself knowing my food now comes in packages. I’ve worried CO’s have done GOD knows what to my food.

I sleep next to an old sink toilet combination for crying out loud. What is normal in that? As I sit here and write this letter, it’s a sham because I am really saying to myself, “The SHU life ain’t all that bad!” And yet, what does that tell you? Not one person with a sain mind and level headed will agree with me. I’ve been in and out the SHU all my bid so far. And yet every so often a MHU person walks down the company and not stop at times. Times he or she stops at my cell, he or she asks, “AM I OK?” I say to myself, “OK!?! Ha!” Then I tell her, “Just fine.” That right there will show you my communication skills have gone for south.

I must stop my letter here because, still I’m questing myself on why would I say the SHU is all bad? This will show you also that my mind is so back and fourth, I think at times not normal things are normal for a person to survive in the SHU. Which is beyond me.

8 thoughts on “Voices from Solitary: Is It Normal to Think That?”