Voices from Solitary: At War With My Own Self

This following account was written by Anthony Lamar Davis, 34, who has been incarcerated for 11 years of a 22-year sentence. He has spent more than six of those years in solitary confinement. In New York State prisons, about 13,000 sentences to solitary confinement in the Special Housing Units, or SHUs, are handed out each year, most of them for nonviolent disciplinary violations, and close to 4,000 people are in isolated confinement at any given time. Here, Davis writes about a suicide attempt that took place last year, and his ongoing battles with the effects of extreme isolation. He can be reached by writing: Anthony Lamar Davis, #04-A-3293, Shawangunk Correctional Facility, P.O. Box 700, Wallkill, New York 12589. –Lauren Denitzio 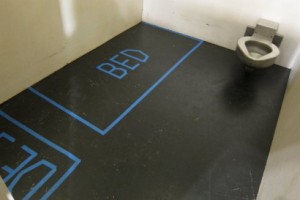 On August 4, 2013, while waiting for an officer to handcuff and escort me back to the cell that awaited me after showering, I sat on the floor holding a razor used for shaving. Today was the day I decided to end my life. My decision came from a mixture of things. Things like the living nightmare that I called my childhood, my loneliness, the fact that I have been incarcerated for 11 years and had not seen one single family member – including my own children – in that time. Hundreds of things ran through my mind. Including being in extreme isolation.

In my 11 years of incarceration, I’ve been in and out of solitary confinement for about 6 1/2 years and a 3 year sanction had just been imposed on me (it has since been modified) for an accusation for which I was falsely accused, causing me to be removed from a facility located about 20 minutes outside of New York City (Sing Sing Correctional Facility) – where I am from – to a zoo-like facility build to house prisoners in solitary confinement, which is located hours away from my city where my children are.

On August 4, 2013, I’ve had enough. And, truth-be-told, I was not at all afraid, excited, anxious, or nervous as I broken the guard on the razor and cut my wrist / forearm to the point where I had to be taken to an outside hospital for stitches. I felt no pain. Nothing. I knew that suicide was an effective way to get rid of all the difficulties that surrounded my life. What the hell is the purpose of living if one does not experience happiness?

Again, I have buy discount ambien done over 11 years in prison off of a 22 year sentence (New York state prisoners do 85% of their determinate sentences if they “behave”) so I do have a release date. But in the way that I have been affected by extreme isolation, I fear that I will not be productive in society. I have no family. If I was to be released from prison today, I would be completely lost; like being born as a full grown adult. Furthermore, I am not the same person I once was. The charming, funny, handsome, charismatic individual whom I used to be is gone. His soul snatched away by the psychological effects of solitary confinement. I have now become this soul-less, bitter, fraction of myself who is emotionally unstable and full of rage. This is not how I want to live; who I want to be.

I am at war with my own self and it has become a constant struggle to wake up and face the day. I have become a monster created by life and taught by the effects of solitary. I’ve come to realize that this is who I am now and I don’t like what I see when I stare at the monster in the mirror. The fight. The war. I take solace in the possibility that I could wake up one morning, defeated. Not wanting to fight anymore.

And what happened on August 4, 2013, will happen again. But this time the results would be final.

5 thoughts on “Voices from Solitary: At War With My Own Self”