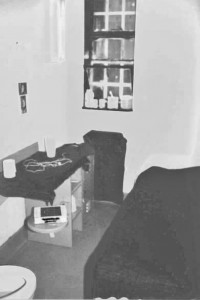 United Nations Special Rapporteur on Torture Juan Méndez has concluded that the state of New York violated the rights of three incarcerated men “to be free from torture” by locking them up them in long-term solitary confinement.  The findings, which were submitted to the UN Human Rights Council last month, were published alongside similar “observations” on the human rights practices of nearly 70 other countries. The Special Rapporteur is appointed by the Human Rights Council to serve as the UN’s chief expert and investigator on nations’ use of “torture and other cruel, inhuman and degrading treatment or punishment.”

The three individuals named in the report are William “Billy” Blake, Stephan Poole, and Kenneth Wright. According to Méndez:

Mr. William Blake has been incarcerated in a SHU, held in a barren concrete cell with no furnishings other than a steel bed frame for 25 consecutive years. Mr. Stephan Poole received a sentence of 36 months in the SHU for allegedly planning an escape. In the eight years and nine months prior, he had allegedly received no reports of misbehavior. Mr. Poole has reportedly accumulated additional lengthy SHU sentences for non-violent prison infractions, including refusing to return a food tray. He has allegedly developed insomnia and paranoia and has become increasingly anti-social as a result of his confinement. Mr. Kenneth Wright has been repeatedly confined to SHU as punishment for using marijuana, despite proactively seeking treatment from the Department of Corrections health service. Allegedly, after Mr. Wright’s latest infraction, authorities subjected him to six additional months in SHU and failed to take steps to assess his medical condition and provide necessary treatment. It is reported that Mr. Wright has struggled with depression, hopelessness and thoughts of suicide during his time in SHU. In addition, isolation in the SHU changed his behavior: he became more aggressive and started talking to himself.

In a separate subsection of the document, the Special Rapporteur specifically examines the case of Blake, who is believed to have been held in solitary longer than anyone else in New York State. Méndez cites an earlier communication regarding Blake–to which he has yet received no reply from the U.S. government:

Mr. William Blake, 50 year old, [is] incarcerated at the Elmira Correctional Facility…It is alleged that he has at least 48 years remaining on his sentence, and does not know whether he will ever be released from Special housing units (SHU) because administrative segregation is indefinite in nature; New York state allegedly places no upper limit on the length of administrative segregation. It is reported that recreation consists of one hour in an empty space surrounded by concrete walls on three sides. DOCCS provides no exercise equipment. Furthermore, it is alleged that despite Mr. Blake’s repeated requests, DOCCS has not provided an anticipated date of release from administrative segregation. DOCCS has also refused to tell Mr. Blake how or if he can earn release from the SHU. In a 2009 review of Mr. Blake’s status, DOCCS included such statements in its reasoning: “His long sentence would be an incentive for him to attempt another escape, as his only reasonable means of gaining freedom.” But in a 2002 review, DOCCS recognized that neither Mr. Blake’s disciplinary history nor his history while in DOCCS custody, standing alone, justified his continued status in administrative segregation. Mr. Blake reported that he struggles daily to cope with the intense emotions and the depression that bears down on him as he reflects on his quarter-century in extreme isolation.”

In 2013, Solitary Watch published his essay about life in isolation, “A Sentence Worse Than Death.” In summing up, he wrote:

Had I known in 1987 that I would spend the next quarter-century in solitary confinement, I would have certainly killed myself. If I took a month to die and spent every minute of it in severe pain, it seems to me that on a balance that fate would still be far easier to endure than the last twenty-five years have been. If I try to imagine what kind of death, even a slow one, would be worse than twenty-five years in the box—and I have tried to imagine it—I can come up with nothing. Set me afire, pummel and bludgeon me, cut me to bits, stab me, shoot me, do what you will in the worst of ways, but none of it could come close to making me feel things as cumulatively horrifying as what I’ve experienced through my years in solitary. Dying couldn’t take but a short time if you or the State were to kill me; in SHU I have died a thousand internal deaths.

According to Méndez’s report, about 4,500 individuals are incarcerated in Special Housing Units (SHUs) across New York state, where they are “deprived of all meaningful human contact, including phone calls, recreational activities, or rehabilitation programs.” His findings constitute just the latest critique to be levied against the New York Department of Corrections and Community Services (DOCCS) for what is broadly seen as its excessive reliance on solitary and other forms of extreme isolation. The last two years have witnessed the release of several articles and reports have highlighted the problem, and the formation of a broad-based coalition, the New York Campaign for Alternatives to Isolated Confinement to oppose solitary in New York. In January, New York lawmakers introduced the Humane Alternatives to Long-Term Solitary Confinement Act, and in February, the New York Civil Liberties Union reached an agreement in a lawsuit against DOCCS that protects youth, pregnant women and other vulnerable populations from being placed in “the box,” and calls for further study of the practice.

The Special Rapporteur closes the subsection on NY DOCCS by calling on state and federal officials “to undertake a prompt and independent investigation of the allegations of prolonged solitary confinement, leading to its immediate termination, and to provide full redress to the victims.”

Other American prison-related issues addressed in the report include conditions at ADX Florence and in California’s SHUs, the prolonged isolation of the “Angola 3” and alleged terrorist Ahmed Abu Ali, and the denial of medical treatment to now-released political prisoner Lynne Stewart.