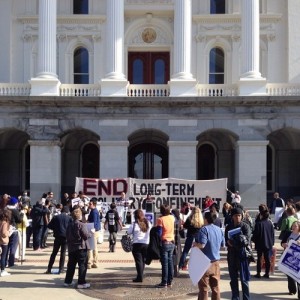 Demonstrators gather at the State Capitol in Sacramento on Tuesday. Photo by Pete Brook.

“We’re here to question the existence and effects of the SHU,” stated California Assembly Member Tom Ammiano on Tuesday, “and we don’t think this new proposed policy goes nearly far enough.” Ammiano, who chairs the Assembly’s Public Safety Committee, was speaking at the second joint California Assembly-Senate hearing on the use of solitary confinement, including SHUs (Security Housing Units), in the state’s prisons.

Representatives from California’s Department of Corrections and Rehabilitation (CDCR) and various experts sat in front of a packed courthouse to discuss the content of a newly proposed step-down policy, which CDCR promises will address both the public and legislature’s concerns and pave a way out of the SHU for over 3,000 people who have endured isolation in the state’s prison for years or decades.

California’s prison administration has never felt this much heat. Last year tens of thousands of prisoners went on hunger strike across the state to bring attention to the excessive use of isolation and policy of gang-validation in California’s prisons. After starving themselves for 60 days, leaders of the Pelican Bay Short Corridor Collective agreed to temporarily halt the historic protest in order to give legislators and prison officials a chance to hash things out. Five months later, CRCD’s representatives George Giurbino and Suzan Hubbard came back to Sacramento to boast sweeping reforms.

Over the past several months, Giurbino and Hubbard explained at the hearing, CDCR has conducted an internal audit of their gang-validated SHU population. Out of 632 reviews conducted, prison officials claim that 408 individuals, 80 percent of those reviewed, have been cleared for release into the general prison population. The remaining several thousand individuals in the SHU have been granted new privileges, including access to lotion, laundry soap, extra pouched food items from the canteen and up to 40 pictures of their loved ones instead of the previously allowed 15.

In a private interview after testifying at the hearing, prisoners rights attorney Charles Carbone said, “What CDCR didn’t tell us today is that under their new proposed step-down policy there’s no way out of the SHU other than debriefing or participating in CDCR’s behavior modification program. There used to be an active review process, every 4 or 6 years, that’s gone now. Not to mention,” Carbone continued, “the high percentage of individuals being promised release from the SHU shows clearly that CDCR’s gang validation policy was not working. Those 632 people never should have been in there in the first place.”

One of the principle concerns raised at the hearing was CDCR’s system of gang validation, which has been criticized for using items as insubstantial as possession of a book, photograph or drawing as “evidence” of gang-affiliation—and therefore justification for indefinite placement in solitary confinement. “According to CDCR’s policy,” said Assembly Member Ammiano, “many of us sitting on this committee would be gang associates, I don’t know how it’s possible to avoid association under this system.”

According to Carbone, CDCR’s new policy promises to be even worse. “This is a cleanup job,” said Carbone. “The department’s strategy is to give an enormous amount of lip service and offer a maze of regulations even their own employees at a lower level don’t understand. They want to tap dance around the real issues in an effort to disguise their real goal—to dramatically expand the number and nature of prisoners in SHU confinement.”

Carbone is referring to the 1,500 new Security Threat Groups (STGs) that CDCR’s new step-down policy plans to add to this previously short list. Evidence of membership or allegiance to any of these groups is enough to validate a prisoner as a gang member and land them solitary confinement for a very long time. In addition, the new policy stipulates a period of ten years to expunge gang validation from a prisoner’s record, a mandatory minimum of three of those years to be spent undergoing “behavior modification” in the SHU.

“With this new policy CDCR is expanding their use of isolation,” Carbone continued. “They’re telling their employees ‘Everything’s cool, no one’s gonna loose their jobs, we just need to reshuffle the deck.’” According to Carbone, as the CDCR’s proposed step-down policy releases hundreds of people from isolation, the new policy wide reach through the large-scale expansion of STGs will have those cells reoccupied in no time.

“For many years CDCR operated under the false notion that prison gangs, like Black Guerilla Family and La Familia, were inherently more dangerous than members of street gangs like the Crips and the Bloods,” said Carbone. “They now know their assessment was entirely wrong. In addition, the intelligence they can squeeze out of street gang members by locking them in isolation and forcing them to debrief is more valuable to the law enforcement community. CDCR is trying to raise its status.”

Perhaps the most controversial aspect of CDCR’s new policy is the program of “cognitive behavior restructuring” that requires prisoners in the SHU to participate in a strict regiment of “self-directed journaling.” These journals will be read by CDCR officials and used as a basis to determine a prisoner’s eligibility to “step-down” to a lower level of isolation and eventually to leave the SHU. In these journals, a prisoner is expected to confess to (and repent for) everything prison administrators have accused them of, including gang affiliation.

This method, based on theories developed by behavioral psychologist Dr. Stanton-Samenow, has already been implemented in prisons across the United States. It’s widely been criticized, as a compulsory form of brainwashing and a way to break down prisoners psychologically through techniques that many agree are tantamount to torture. Once broken down, the theory goes, prisoners can be helped to “overcome errors in thinking” and “reform.”

Peter Cubra was cooperating attorney on Ayers vs. State of New Mexico, a case that the ACLU successfully litigated in 2003. Cubra describes Stanton’s conative behavior restructuring, particularly as it played out in New Mexico, as a “clockwork orange-type torture.”

In 1980 the New Mexico Penitentiary was the site of one of the most violent prison riots in US history. Thirty-three prisoners were killed during the riot and 200 injured. Of the 12 corrections officers taken hostage, all were treated for injuries caused by beating and rape. Though the old prison was eventually shut down, the riot forever changed the trajectory of New Mexico’s approach to imprisonment. Twenty years later, they bought Stanton’s cognitive behavior material and used it to create a step-down program very similar to what’s being proposed and implemented in California today.

“They tried to break people through what they called ‘integrated cognitive restructuring,’” continued Cubra. “They punished those who refused to confess their moral short-comings by starving them on the ‘food loaf’…prisoners had to participate or the torture would be enhanced.”

The ACLU lawsuit eventually forced New Mexico to moderate program, taking away the punitive measures to enforce it and exempting prisoners with psychological problems, but prisoners in New Mexico are still being subjected to a watered-down version of cognitive restructuring in New Mexico today.

“Every time you punish a person who’s incarcerated you make them more anti-social,” Cubra added. “I subscribe to rehabilitation as a concept, but any program has to be voluntary with no consequences. Stanton’s method could be offered as one item on a menu of choices—but to punishing people for not participating, sometimes even corporally, is unconstitutional.”

“The classic definition of torture,” said attorney Charles Carbone on the topic, “is the use of mental or physical harm to extract information. It’s not just to hurt somebody, you want to preserve him or her long enough in order to get them to tell you something important. The DOC’s incentive is to extract information about crimes being committed both in prison and the free community. But this information is inherently unreliable, untested and being obtained though coercive means.”

“Only the CDCR can get away with calling an expansion of their power and authority a reform,” Carbone continued. “I think the Department is getting what it wants here. The real pity is that it’s not what the public or legislatures want. In 10 years from now were going to have the exact same number or more people in security housing in California. Still,” he added, “I think CDCR realizes they’re going to have to go back and rework this proposal. For years now they’ve been able to the manipulate the legislature—but that gig is now up.”

Clearly, not only the legislatures, but also the hundreds of California voters that attended the Public Hearing in Sacramento on Tuesday were far from convinced. After the legislators and experts spoke, dozens of survivors of solitary confinement, concerned citizens and family members lined up to express their dissatisfaction with CDCR’s new proposal. In his testimony, Professor Craig Haney pointed out that the United States, and California in particular, is “unsettlingly out of sync with the international community on the issue of solitary confinement. “Modestly implemented reform,” he added, “is not going to make a difference.”

One thought on “At Hearing on Solitary Confinement in California Prisons, Advocates Challenge "Reforms"”