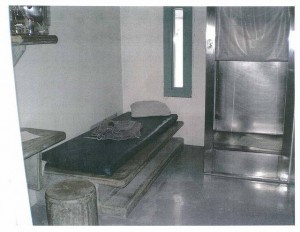 A solitary confinement cell at ADX federal supermax, which one warden called “a clean version of hell.”

Tomorrow at 6 pm, activists with the No Separate Justice campaign will gather at Lower Manhattan’s Metropolitan Correctional Center to protest what they believe are torture and other travesties taking place in the heart of the federal justice system.

MCC, a federal jail, is located a stone’s throw from the U.S. Courthouse for the Southern District of New York, a center of many post-9/11 terrorism cases. On MCC’s tenth floor, suspects in these cases have been held in extreme solitary confinement, often completely cut off from their families. When they have gone on hunger strike in protest, they have been force-fed. All of this has happened, in the middle of New York City, without any of the public outcry that has met similar treatment of detainees at Guantánamo.

In The Nation last week, Pardiss Kebriaei of the Center for Constitutional Rights, who has clients at Guantánamo, writes about the Constitutional and human rights violations happening closer to home. She highlights the case of another client, Fahad Hashmi, whose predicament, she writes, “was an introduction to a slice of unjust punishment and torture on American soil—another outrage born of the ‘War on Terror,’ where government zealotry produces grotesque outcomes, the façade of legal process can legitimize profound unfairness, and barbarity is masked by utter normality.”

Hashmi was convicted in 2010 of providing “material support” to Al Qaeda, by allegedly “allow[ing] an acquaintance to keep a suitcase with socks and ponchos meant for Al Qaeda in Pakistan in his apartment for two weeks…and allow[ing] the acquaintance to use his cell phone to call co-conspirators.” Kebriaei writes: “After three years in pre-trial solitary confinement at the Metropolitan Correctional Center (MCC) in Manhattan, layered with Special Administrative Measures (SAMs)—a euphemism for gagging Fahad and a small circle of people permitted access to him only after agreeing to be gagged as well—Fahad pleaded guilty on the eve of his trial to spare himself an effective life sentence. In exchange for fifteen years of his life, the government got a conviction”–as it virtually always has in terrorism-related cases. Kebriaei continues:

Unlike during the early period at Guantánamo, the injustice of Fahad’s punishment did not result from being rendered to an offshore prison and held in blatant violation of the law; it emerged out of the warp of the legal process itself. Fahad’s prosecution was based on a broad theory of guilt by association, not individual culpable conduct. It achieved in peacetime, on American soil, the breadth of detention usually only permitted in wartime, and meant to be temporary, reserved for the exigency of battlefields, and not punitive. Fahad’s conviction came from the compromised calculation of a young man of 30 facing the prospect of imprisonment until age 100 and deciding not to take that risk, not the government proving its case against the panoply of Fahad’s rights as a criminal defendant.

Fahad’s torture has also not been flagrant; it has been silently mind-crushing. For over 2,100 days, he has been alone in a space he can touch both sides of simultaneously. He has not touched another human being since 2007. While he has been at ADX for nearly three years, he has no sense of his surroundings, because all he can see of the natural world is a patch of sky through steel mesh from an outdoor “recreation” cage two to three times a week, if that. He has not set foot on anything other than concrete in over six years. The image of Fahad’s torture is not that of a person being led around an interrogation room on a dog leash, or held in a stress position with heavy-metal music blasting. It is a person sitting still in a small cell, slowly deteriorating in a modern prison on the outskirts of a small Colorado town.

To the extent that Fahad’s story is unknown to the broader public, that is additionally because he and his experience have been walled off by deliberate government barriers, including the prohibitions of Special Administrative Measures as well as tightly controlled access to prisons like ADX and the MCC. When Fahad was under Special Administrative Measures during his pre-trial detention at the MCC and for a year after his conviction at ADX, no member of the public except for his attorneys and three family members—not a reporter, researcher, or United Nation expert—was able to communicate with him in any form, even by sending a letter. The few people allowed to communicate with him were also forbidden, under threat of criminal sanction, from speaking about him to the public…

Even now that Fahad’s Special Administrative Measures have been lifted, he remains mostly cut off and inaccessible, because direct access to prisoners at ADX, as at the MCC, is extremely restricted under the most basic circumstances. Independent human rights monitors like the UN expert on Torture have made repeated requests to visit both prisons but to no avail. No journalist has yet been allowed direct access to inmates at these prisons. These denials mirror the experience of the press and human rights monitors vis-à-vis Guantánamo.

Fahad is one of more than 400 people who have been convicted on terrorism charges by the Department of Justice since 9/11. As with his case, many of these cases raise sobering questions that need to be examined. We recognize, to a certain extent at least, that the criminal justice system produces unjust results in other contexts—that there is often a wide gap between personal culpability and the punishment deemed deserved; that the process is often not meaningfully adversarial, but stacked against defendants; that conditions of confinement are sub-human for thousands of prisoners. Yet, paradoxically, the dominant narrative in the context of these terrorism cases has been largely limited to praising the strength and competence of the civilian system. That narrative developed in opposition to the ad-hoc, illegal military system at Guantánamo. But a fair critique of one cannot continue to wait for the dismantling of the other.