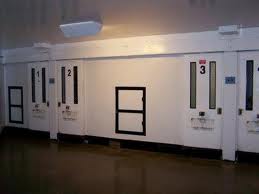 The following comes from Joseph Stanwick, who has spent nearly two decades in solitary confinement in Texas. In this letter to Solitary Watch, he describes his last holiday season, which was spent under lockdown status. In supermax prisons and solitary confinement units, where people rarely leave their cells to begin with, lockdown often entails further deprivations of things like regular meals, showers, and exercise periods. During this time, Stanwick developed a relationship of sorts with the man in the cell across the corridor, and received from him a gift that was physically welcome but psychologically and morally unsettling. The author welcomes mail at: Joseph Stanwick #636416, 777 FM 3497, Lewis Unit, Woodville, TX 75990. –Jean Casella

We are on lockdown status again as every inch of the prison compound is searched for contraband and living on thin sandwiches again, jam sandwiches we call them, made of two pieces of stale bread and a spot of peanut butter jammed together. This time around they are the worst ever and I am hungry day and night or was until another con began giving me his food…

Across the wide expanse of cellblock directly in front of my cell on the opposite side lives an elderly Mexican American who is confined to a wheelchair. The day after Christmas he began refusing his meals. I didn’t think it unusual at the time because some people fast around the holidays, you know? But then I recalled that up to Christmas Eve he had been getting law books delivered to him every other day or so for months from the prison’s legal library, an activity that suggested he was diligently working on the appeal of his conviction or perhaps a law suit, but then abruptly after Christmas no more law books came and he quit eating.

The guards took no notice of this because they work a different cellblock every day and too there is always a con or two skipping a meal. No one seemed aware that the old man had stopped eating, but me. When we went on lockdown status on January eleven he had not eaten in sixteen days. I do not know his name of even if he speaks English. I stand at my cell door window panels and smile and nod across to him on the other side of the corridor and he does the same. That is the extent of our communications to each other, nods and smiles. I began informing the guards that the old man had quit eating.

I once read an article long ago in some magazine about the I.R.A. (Irish Republican Army) prisoners inside English prisons that went on hunger strikes to force England to recognize them as prisoners of war instead of common criminals. Many Irishmen starved themselves to death and the horrid publicity of it all compelled the English to agree to the strikers demands. I remember well reading about the I.R.A. prisoner who celebrated the victory from a hospital bed where in spite of his jubilance and desire to live he was doomed to die because after seventy five days or so of eating no food he had caused fatal and irreversible damage to his vital organs. He had passed the point of no return. I wonder what kind of damage the old man is doing to his organs and how much nearer his point of no return must be because of his age.

Not long after we began getting bag meals he started asking the guards feeding to give his bag to me. At every meal. It is no inconvenience to do so since we live right across from each other and so I began eating his jam sandwiches and my jam sandwiches too. He sits at his door at meal times and as soon as he sees that his bag has been given to me he shoots me a thumb up sign then disappears into the depths of his cell. I have asked a Srgt. of the guards and a Lt. and a Captain to stop at his cell and talk to him when they each came walking through the cellblock on their inspection rounds and they each did, but still he refuses to eat. I eat his food instead and am grateful for if too because eight pieces of bread at each meal instead of four keeps the pang of hunger away.

Today is the twenty third of January and it has been twenty nine days since the old man last ate. I woke up in the middle of last night to discover his cell door opened and he gone and I was startled by the sight of it. But then a few minute later guards brought him back to his cell. I think they must be taking him to the medical department to weigh him ever so often and monitor his weight loss. That seems logical and I can think of no other reason for taking him out of his cell at night. There are horror stories floating around inside this super segregated high security prison about force feeding conis who try to escape their sentence by starving themselves to ruin. Strapped down to a gurney, a rubber tube is pushed up their nose and down their throat to drip life preserving nutrients into their emaciated bodies. Ghastly tales.

I was able to get a guard to slide a National Geographic magazine and a religious magazine under his cell door. A minute later he appeared and shot me a thumb up. He is looking gaunt. I live in solitary confinement same as he and cannot leave my cell and so I have done all that I can possibly do to help him. I do not want him to give up on life. I care and yet at the same time hunger compels me to eat his food, a paradox I struggle with daily, reasoning with myself that if I refuse to accept his food the guard will just give it to someone else, but even so that rationalization provide thin comfort and I think that I am agonizing as much for eating his food as he must be for not eating it. Prison is hell I tell you.

On January twenty five the old man began eating again and on February one we were taken off lock down status and jam sandwiches.