There is remarkably little systematic information available about who is held in segregated confinement in our nation’s prisons and jails.  I recently pulled together what little quantitative data exist.  What I found is preliminary, but it suggests that in many states the harsh conditions of solitary confinement are probably disproportionately affecting prisoners of color.  Full details on sources, methodology, etc. are available in Margo Schlanger, Prison Segregation: Symposium Introduction and Preliminary Data on Racial Disparities, 118 Mich. J. Race & Law 241 (2013).

The best sources of demographic information about prisoners are the various surveys and censuses conducted by the U.S. Department of Justice Bureau of Justice Statistics (BJS). While no BJS publication directly addresses the issue, and no BJS dataset allows its full analysis, it is possible to glean something from the most recent BJS prison census, the 2005 Census of State and Federal Adult Correctional Facilities. I present in the Table that follows data derived from that census for seven state facilities. I also include, for comprehensiveness, information from a 2012 NYCLU report on New York supermax confinement. (Even so, the table covers only a very small portion of the nation’s tens of thousands of supermax prisoners.) 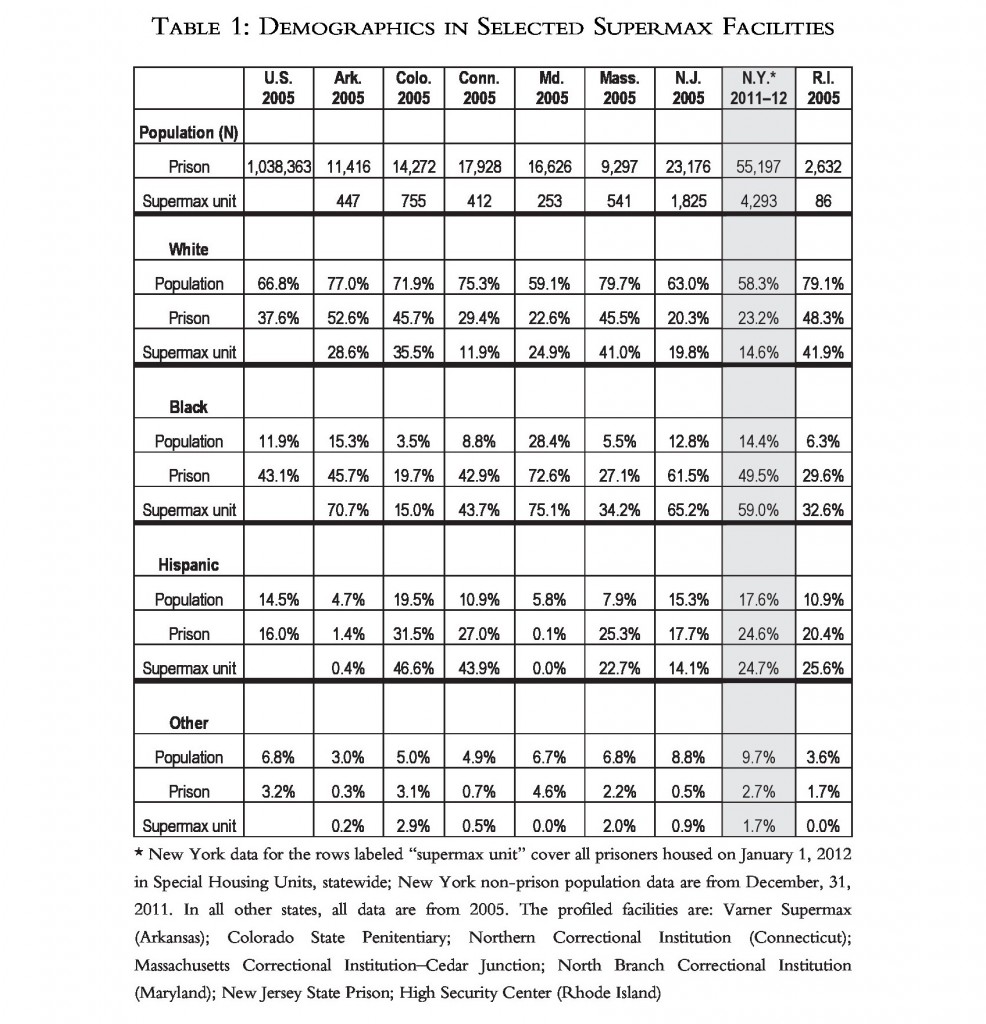 The table includes all the facilities in the 2005 BJS prison census that meet all the following criteria:

Given the limited available information, the table is merely suggestive—but it does support a working hypothesis of current racialized impact for isolated confinement. In four of the eight columns (Arkansas, Colorado, Connecticut, and New York), non-white prisoners are substantially overrepresented in the highlighted facilities; statistical testing confirms that the difference is statistically significant. (In three of the other four—Massachusetts, New Jersey, Rhode Island—the small overrepresentation is not statistically significant; likewise, the tiny proportion of underrepresentation in Maryland lacks statistical significance..)

Of course evidence of disproportion does not demonstrate racial discrimination; it is possible that whatever disproportion exists has other explanations. But whether or not the source is detectable bias, the demographic impact of supermax and similarly isolated custody seems to me worthy of analysis. In short, it seems high time for corrections researchers to more systematically examine race in this area. American jails and prisons are themselves vastly racially skewed in their populations, and what we are likely to find is an even more extreme skew for those who are on the receiving end of isolated confinement’s harsh effects.