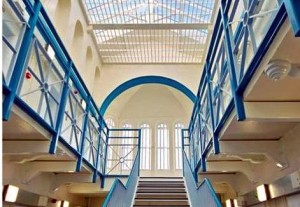 Note: The following article orginally appeared in The Crime Report, and is reposted on Solitary Watch by permission.

With great power, the saying goes, comes great responsibility, and prison systems are places where governments wield unparalleled power over individuals, not only depriving them of their freedom, but controlling nearly every detail of their daily lives. Yet in the United States, prisons and jails operate with a near-complete absence of independent oversight.

The U.S. Department of Justice and the federal courts intervene only in the most extreme cases of cruel and unusual punishment. For example: the epidemic of rapes, stabbings, and brutality at Louisiana’s Orleans Parish Prison, or the barbaric overcrowding in California’s state prisons. Otherwise the treatment of our 2.2 million incarcerated men, women, and children is left largely in the hands of corrections officials—and increasingly, private contractors.

Some countries take their responsibility toward the people they imprison somewhat more seriously. With fewer than 85,000 people in prison, England and Wales have an incarceration rate of 153 per 100,000—just over a fifth of the our 743 per 100,000—due in large part to dramatically shorter sentences. The rate is, nonetheless, one of the highest in Western Europe. Her Majesty’s Prison Service (HMPS) which oversees the prisons in England and Wales (Scotland and Northern Island have their own systems) also has one of the world’s more robust prison oversight structures.

Monitoring of the British prison system rests with three different offices that, in turn, are part of the Ministry of Justice. The effectiveness of this multi-pronged oversight system is a matter of some controversy in Britain itself. But it operates with a level of intensity and independence nearly unimaginable in the United States.

Before a trip to London earlier this year, we applied to HMPS for permission to visit a series of British prisons with different security levels, and were told it would not be convenient. (No pesky First Amendment necessitated the more elaborate excuses we were used to receiving in the U.S.) We had better luck with those responsible for monitoring prison conditions.

In the offices of Her Majesty’s Inspectorate of Prisons, on a narrow street in Westminster, we spoke at length to the agency’s second-in-command, Martin Lomas, the deputy chief inspector of prisons.

The Inspectorate, which employs about 60 people, is charged with providing “independent scrutiny of the conditions for and treatment of prisoners and other detainees, promoting the concept of ‘healthy prisons.’” That concept is measured according to key tests that include safety, respect, and “purposeful activity” for all individuals in custody. It all sounds terribly civilized to visitors from a nation where it’s rare to find even lip service paid to the notion of rehabilitation.

Representatives of the Inspectorate, Lomas says, visit  “all 130 prison establishments in England and Wales” as well as “immigration removal centers, juvenile facilities, and police cells.” They are committed to visit at least once every 4 to 5 years, but “in reality we typically visit most prisons on an unannounced basis every 3 years.” The Inspectorate’s public reports cite everything from poor quality food to brutality by corrections officers, and make recommendations for improvement.

In a December 2012 speech, Lomas’ boss, Chief Inspector Nick Hardwick, explained:  “We use five main sources of evidence: We survey a random sample of prisoners or detainees that we select. We talk to prisoners individually and in groups. “We talk to staff and other visitors. We look at records and data. And we observe. And then we pull all that evidence together to reach our conclusions and recommendations about any improvements required.”

This form of outside inspection is nearly unheard of in the United States. One exception is the Correctional Association of New York (CANY), which has legislative authority, dating back to the 19th century, to enter any New York State prison,  speak with whomever it chooses, and issue public reports and recommendations based on their findings. As a private nonprofit organization, the CANY sometimes sees its recommendations ignored; by the same token, its independence in above reproach.

Nikki Jameson, an activist and journalist, is among the critics who question the independence and clout of the Inspectorate, which is funded by the government. She points out that while the Chief Inspector by law must come from outside HMPS, many of the Inspectorate’s staff do not. Martin Lomas, for example, is a former prison governor (warden). Jameson says inspectors often fail to cite the less tangible elements of mistreatment, such as racism against prisoners of color and anti-Muslim prejudice. And she points out that even when they get it right, they do not have the power to enforce their recommendations for improvement.

“We do not have regulatory powers,” Martin Lomas acknowledges. “Our commitment is to independence; a preparedness to listen to the voice of the detainees and a determination to report openly on the actual outcomes we see from a human rights perspective is the basis of our approach. This is backed up by a body of work dating back over thirty years…A moral authority it could be argued.”

He continued, “In excess of 80 percent of our recommendations are accepted by inspected bodies and we check if they have been achieved when we return and follow up inspections….We can point to significant evidence, including the closure of facilities and changes to institutions and policy where this has been achieved.”

The Inspectorate also does not operate alone. A second strand of oversight comes from the office of the Prison Ombudsman for England and Wales, which “investigates complaints from prisoners, those on probation and those held in immigration removal centres” and “investigates all deaths that occur among prisoners, immigration detainees and the residents of probation hostels.”

In the U.S., there are prison ombudspersons for the federal prison system and a handful for state systems, but they seldom play a significant role. The California Office of Prison Ombudsman, for example, appears to be playing no role in the current prison hunger strike in that state.

Perhaps the most interesting part of the British system involves the Independent Monitoring Boards. Unlike the American prisons, which are largely hidden from public view except for closely controlled family visits, the British prison regime is subject to frequent , unannounced visits by teams of volunteers  picked by the Justice Ministry from local applicants.

“The IMBs and their forerunners, Boards of Visitors and Visiting Magistrates, date back over 100 years,” Judges said. “Unlike the Inspectorate, which inspects periodically, IMBs are in the prison every week and in some case daily and therefore monitors what is happening on an on-going basis. ’ IMBs give prisoners an opportunity to raise their concerns with a body which is independent of the Prison Service.’’

The volunteers come from the local area of each prison and are recruited through means that include advertisements in local papers. They are unpaid, and many, Wilkinson said, are “like us, gray haired pensioners.”

Each volunteer is given keys to the prison. He or she is  free to come and go, day or night, to look at living quarters, sit in on prison programming, visit the kitchens and taste the food. The volunteers go through the cell blocks, totally unannounced, and speak at will with the people being held there. If a prisoner has a request or a problem, the volunteer will bring it to the attention of the prison. Or, to preserve anonymity prisoners can drop an unsigned complaint into a complaint box.

“Issues occurring regularly will feature in the Board’s Annual Report, which goes to the Minister [of Justice] and is published as public document,” says Judges.

IMB members try to be on hand in situations where there is a high risk of prisoner abuse, says Judges—for example “when a prisoner is forcibly restrained…to see that the force used is not excessive and to comment independently on any allegations made against staff.”

They may also visit daily when an individual is placed in temporary solitary confinement to deal with a disciplinary or security problem. But this harshest form of punishment also comes with other built-in safeguards against abuse. “Remember,” said Judges, “that prisoners in segregation are reviewed regularly—at least every 14 days—by a group chaired by a governor and consisting of an IMB member, a chaplain, a representative of Healthcare and the Segregation Unit Manager.” This is in sharp contrast to, for example, the California prison system,  There, individuals can remain in solitary for decades, with nothing more than periodic pro-forma reviews by prison staff.

Even this form of citizen oversight has its shortcomings, however. Some of the most widely criticized facilities in the British prison system are the high-security units known as Close Supervision Centres, where up to 500 individuals are held in what purports to be an alternative to the kind of long-term solitary confinement. The CSCs have come under fire for warehousing prisoners with mental illness and for keeping their charges in round-the-clock lockdown. The IMBs have authority to operate here as well, but security concerns may limit their activities.

Still, the idea of citizens taking responsibility for their incarcerated countrymen, and entering the prisons where they are held, feels very different from our own system, where prisons are places apart from everyday civil society. “Citizens…bring with them the values of the outside world to the closed and deformed world of prisons,” writes Baroness Vivien Stern, a researcher at London’s the International Centre for Prison Studies and a strong force for prison reform in the UK. “They keep alive in the prison a certain view of how human beings should be treated.”