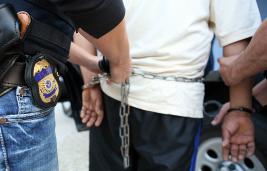 U.S. Immigration and Customs Enforcement last week issued a new “directive” that appears aimed at limiting the use of solitary confinement on individuals held in immigrant detention.

The directive is being cautiously celebrated by human rights, civil liberties, and immigrants’ rights groups, who at the same time warn that a great deal will depend upon how rigorously the new policies and practices are enforced. As NBC Latino reports:

“Solitary confinement in both immigration detention and the criminal justice system is cruel, expensive, and ineffective,” said Ruthie Epstein, a policy analyst for the American Civil Liberties Union in a statement.  ”If strictly enforced throughout the ICE detention system – including at county jails and contract facilities – ICE’s new policy could represent significant progress in curtailing this inhumane practice.”

According to the new directive released on Wednesday, “placement in administrative segregation due to a special vulnerability should be used only as a last resort and when no other viable housing options exist.”  The directive also says “ICE shall take additional steps to ensure appropriate review and oversight of decisions to retain detainees in segregated housing for over 14 days,”  It also states facilities must provide  special reporting requirements for vulnerable populations, including people with medical or mental issues and disabilities, pregnant or nursing women and the elderly, and those who might be at risk of harm due to sexual orientation, gender identity or sexual assault.

Speaking on Friday to NBC Latino, Epstein stresses the concern is enforcement.  Half of ICE detainees are placed in county jails, she explains, adding it will be a challenge to ensure the new practices are followed not just in county jails but privately contracted facilities.

The National Immigrant Justice Center (NIJC) and Physicians for Human Rights issued a September 2012 report,  Invisible in Isolation: The Use of Segregation and Solitary Confinement in Immigration Detention, in which they reported that “solitary confinement frequently is used as a control mechanism. Researchers met individuals who were held in solitary confinement after they helped other detainees ﬁle complaints about detention conditions. People who are mentally ill and people who identify as lesbian, gay, bisexual, or transgender (LGBT) often are assigned to solitary confinement because jail staff is unwilling to deal with their unique circumstances and/or because staff thinks of solitary conﬁnement as a ‘protective’ status for vulnerable populations.”

The report added that “of greatest concern is the apparent lack of strict, comprehensive, and independent oversight of segregation practices, which would help ensure that segregation is only used in extreme circumstances.”

The new directive clearly owes much to the NIJC report, and to a subsequent front-page New York Times story that appeared in March of this year. The Times reported:

On any given day, about 300 immigrants are held in solitary confinement at the 50 largest detention facilities that make up the sprawling patchwork of holding centers nationwide overseen by Immigration and Customs Enforcement officials, according to new federal data.

Nearly half are isolated for 15 days or more, the point at which psychiatric experts say they are at risk for severe mental harm, with about 35 detainees kept for more than 75 days.

While the records do not indicate why immigrants were put in solitary, an adviser who helped the immigration agency review the numbers estimated that two-thirds of the cases involved disciplinary infractions like breaking rules, talking back to guards or getting into fights. Immigrants were also regularly isolated because they were viewed as a threat to other detainees or personnel or for protective purposes when the immigrant was gay or mentally ill.

After the Times article appeared, then-Secretary of Homeland Security Janet Napolitano announced that ICE would “review” its use of solitary confinement.

The new directive falls far short of banning solitary confinement for immigrant detainees, but rather calls for increased scrutiny and frequent reviews–and a lot more paperwork–whenever the practice is used. As detailed by the website FierceHomelandSecurity:

Field office directors within the Enforcement and Removal Operations division of  ICE must review any case where a detainee has been held in solitary confinement  continuously for 14 days, 30 days and at each 30 day interval after that, the  memo says. Review is also required for detainees in solitary confinement for 14  days out of any 21 day period.

Any time detainees are placed into solitary confinement because they have a  mental illness, are a suicide risk, are on a hunger strike, or have been a  victim of sexual assault, the field office director has to be notified within 72  hours.

If detainees speak limited English, the memo instructs field office directors  to consider whether their placement in solitary confinement was the result of  communication or interpretation problems.

In their reviews, field office directors should consider whether alternatives  to solitary confinement are appropriate and whether detainees are protected from  self-harm, the memo says.

Whenever detainees are held in solitary confinement for more than 14 days in  any 21 day period or for more than 30 consecutive days, field office directors  have to submit a written report to ICE headquarters on their findings and any  actions taken.