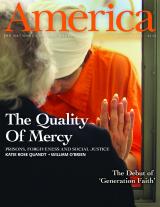 The title of this piece is the title of a cover story in the latest issue of America: The National Catholic Review, written by Solitary Watch Reporter/Researcher Katie Rose Quandt. An excerpt follows; you can read the full piece on the America website.

Brian Nelson spent 12 years of his life staring at four concrete walls. “Day after day, all I saw was gray walls,” he writes of his time in solitary confinement at Tamms Correctional Center in Illinois, “and over time my world became the gray box.” While in solitary, Nelson lost 41 pounds, developed severe psychological problems and prayed for death to end his suffering.

Nelson, who was convicted of robbery and murder at the age of 17, understands that crimes bring consequences. But solitary confinement, he says, is more than punishment—it is torture. It is designed to deny human fellowship and strip away human dignity. A devout Catholic, Nelson describes solitary confinement as “just plain cruel and completely against the Catholic Church.” He explains: “In solitary, you have no creation. You have some air, some water and maybe a bug or two. That’s it.”

Prisoners in solitary confinement spend 22 to 24 hours a day in an 8-foot by 10-foot cell in conditions of extreme isolation and sensory deprivation. Some, like Nelson, languish in these tomb-like cells for years or even decades. And in the United States, the practice is far from rare. Although solitary confinement is often thought of as a last resort for the most dangerous criminals, in fact 80,000 prisoners are held in isolation in state and federal prisons across the country on any given day. Many are placed in solitary confinement for nonviolent infractions like possession of contraband or failure to obey an order promptly.

During his years in isolation, Nelson suffered extreme insomnia, was unable to eat, developed blood blisters from his uncontrollable pacing and grew so depressed that at times he lost the will to live. “Every day…I got down on my knees and prayed that I would die in my sleep,” he writes, “yet God’s will was not mine.”

Nelson did what he could to keep sane. “I fought hard with my own mind, and I prayed,” he says. He copied the entire Bible by hand, read hundreds of books on Catholicism and followed the Trappist tradition of praying seven times a day. But it was a struggle to maintain his religious practice amid the isolation. “As Catholics, we should participate in the communion of saints with each other. We are not supposed to be alone.”

Nelson also faced frequent denials of his religious rights. He was unable to attend Mass and was often denied the chance to receive Communion. He was harassed and placed on suicide watch for fasting or abstaining from meat and sometimes was even denied his Bible, prayer book and rosary. “I did confession at my cell front,” he says. “An officer could hear it. There was a speaker in my cell. They wouldn’t give me privacy. But my soul is more important.”

The past decade has witnessed an increase in resistance to solitary confinement by human rights and civil liberties groups, mental health advocates, concerned citizens and people of faith, including Catholics.

In 2000 the U.S. Conference of Catholic Bishops released a statement on crime and criminal justice, calling on Catholics to “insist that punishment has a constructive and rehabilitative purpose.” The bishops stated: “We oppose the increasing use of isolation units, especially in the absence of due process, and the monitoring and professional assessment of the effects of such confinement on the mental health of inmates.”

“We’re opposed to the inhumane treatment of other human beings,” explained Bishop Howard J. Hubbard of Albany, N.Y. He said that although individuals face incarceration because of their own actions, “Once they are in such a facility, we would expect them to be treated in a humane way…. If they are not, the entire community should be concerned with this, not only people whose friends and family members are affected.”

Bishop Hubbard was spurred to action in the late 1990s after speaking with prison chaplains who served isolated prisoners. The chaplains were very concerned about the effect this was having on the prisoners’ social and mental well-being. Bishop Hubbard brought the issue before other Albany-area religious leaders, who worked together to lobby for legislative change and to increase media attention on the issue.

He and his fellow New York bishops discussed solitary confinement in a pastoral statement on criminal justice in 2000, asserting: “The human dignity of inmates is compromised by extended confinement in such units. Rather than restoration and rehabilitation, such extended isolation threatens to inflict mental harm on inmates.”

The New York State Catholic Council continues to encourage lawmakers to reconsider the use of prolonged solitary confinement. “In relation to [Special Housing Units], we question the conditions under which they operate, the extent of their use, and the extended length of time of their use,” the group said in a statement. “Our chief concern is loss of human dignity, where punishment overrides concerns for public safety, rehabilitation or restitution.”

The Rev. Richard L. Killmer, a Presbyterian minister and executive director of the National Religious Campaign Against Torture, says the work of Catholic advocates is key to his organization’s mission. The campaign is an interfaith effort, with representatives from more than 300 religious groups, and aims to end U.S.-sponsored torture and the use of prolonged solitary confinement. Reverend Killmer says the Catholic Church is influential in anti-torture work because Catholics tend to be “very concerned with real pain and hurt and brokenness that occurs in the world.”

One of the campaign’s many collaborators is the Oratory Church of St. Boniface, a Catholic parish in Brooklyn, N.Y., that has an active social justice committee. Marion Defeis, C.S.J., one of the committee members, served as a chaplain for 23 years at the Rikers Island jail complex in New York City. There she saw firsthand the effects of solitary confinement. She says, “I felt it was inhumane, it was brutal, it was a terrible way to treat people.” Later, after reading an article distributed by the National Religious Campaign Against Torture that equated solitary confinement with torture, she realized, “I was witnessing torture without calling it that.”

Sister Marion brought her concerns to the social justice committee, which began hosting panels on solitary confinement and inviting experts and former prisoners to speak. After hearing firsthand accounts of solitary, she says, people began to understand that this was torture. Solitary confinement “is directly opposed to the way…we are supposed to treat one another,” says Sister Marian. “We are inflicting pain unnecessarily. If we believe we are children of God, how can we treat our brothers and sisters that way?”