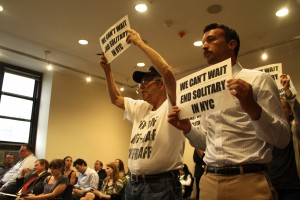 The New York City Board of Correction (BOC) voted on Monday to reject a petition to limit solitary confinement in New York City’s jails. The petition, developed by a grassroots advocacy group called the Jails Action Coalition (JAC), sought to bring sweeping reform to a jail system with one of the highest rates of prison isolation in the country.

On Rikers Island, which holds more than 10,000 of the average 13,000 men, women, and children in the city’s jails, approximately one in ten individuals is in “punitive segregation” at any given time. Many are placed there for nonviolent misbehavior, including drug use, foul language, and “horseplay.” The jail complex includes special punitive isolation units for people as young as 16, and for those with mental and physical disabilities.

“Solitary is torture, and it’s affecting people with mental illness and regular prisoners because it’s so extensive, so out of control, and so unmonitored, said Leah Gitter, a member of JAC who has a family member with mental illness on Rikers Island. Gitter, who was present at Monday’s meeting, told Solitary Watch: “We have to have the rules changed in order to make sure that we stop this form of punishment.”

The new rules outlined in JAC’s petition, if adopted, would have directed the New York City Department of Corrections to end the use of isolated confinement except as a last resort to prevent violent behavior; increased daily out-of cell time for those placed in solitary; and banned altogether the isolation of children, young adults, and people with mental and physical disabilities.

The BOC, which makes rules and provides oversight for the city’s jails, debated the petition during its public meeting on Monday morning in front of a packed audience that included more than a dozen members of JAC, who held signs reading “We Can’t Wait: End Solitary in New York.” In the end, the Board elected not to proceed with “rulemaking” in response to the petition, but instead to appoint a committee to study the practice.

BOC member Dr. Robert Cohen, a Manhattan physician and expert on prison health and mental health care, vocally supported JAC’s petition. He called the use of solitary “dangerous,” especially for people with mental illness and adolescents, who are confined in punitive segregation at particularly high rates. “During the past three years,” he pointed out, “the percentage of prisoners languishing in solitary confinement has increased dramatically, without benefit in terms of decreased violence or increased safety on Rikers Island,” either for corrections officers or the prisoners themselves.

“I have regularly visited solitary confinement areas on Rikers Island,” Cohen stated. “On any given day, the vast majority of prisoners spend 24 hours a day in their cells, except for brief showers. In the Central Punitive Segregation Unit, the majority of prisoners spend their day lying on the beds, their heads covered by a blanket.” Setting rules for the use of isolation, he said, was part of the BOC’s “statutory responsibility.”

BOC Chair Gerald Harris, a retired criminal court judge, made efforts to close the discussion on JAC’s petition, but members Catherine Abate, who heads the Community Healthcare Network, and Pamela S. Brier, CEO of Maimonides Medical Center, insisted on a clear deadline for the study. The Board agreed that it would be completed by the summer’s end and discussed at the September meeting.

Sarah Kerr, staff attorney at the Prisoners’ Rights Project of The Legal Aid Society, was among the JAC members present at the meeting. In a statement released by JAC, Kerr said that the DOC’s use of punitive segregation is “inhumane and violates standards of decency.” She continued, “The Board of Correction’s decision not to initiate the rulemaking process means that the damaging effects of isolation continue in our jails.”

The consequences of time spent in solitary confinement include destructive (and sometimes irreversible) effects on mental health, including hypersensitivity to external stimuli, hallucinations, panic attacks, obsessive thinking, insomnia, and paranoia. Studies have shown that common patterns of depression, anxiety, anger, and suicidal thoughts often leave individuals psychologically damaged and more prone to unstable and violent behavior, which can in turn lead to higher rates of recidivism.

In recent years, a handful of states have made moves toward reducing the use of isolation in prisons and jails, in some cases reporting both budgetary savings and decreases in prison violence. In contrast, the New York City Department of Correction has expanded its punitive segregation capacity by 27 percent in 2011, another 44 percent in 2012, under the leadership of Commissioner Dora S. Schriro and with the support of the correction officers’ union.

The DOC is currently incarcerating at least 1,000 people in solitary confinement for up to 90 days, and by the end of the year will have 1,215 isolation cells–giving New York City a rate of solitary confinement that is more than double the national average of approximately 4 percent.

In response to a request by Solitary Watch, Department of Correction spokesperson Robin Campbell did not comment on the BOC’s vote or JAC’s petition, but stated in part that beginning in July, the DOC would be partnering with the city’s Department of Health and Mental Hygiene to implement a new model of “needs-appropriate responses to mentally ill and severely mentally ill inmates who violate rules, as well as system-wide reforms affecting misbehaving inmates with no mental health diagnoses. These changes are part of an ongoing series of practical punitive segregation reform.”

The New York City Department of Correction is one of the few local jail systems that has an independent monitoring board empowered to make rules for the treatment of its prisoners. JAC members highlighted this role in a rally prior to the meeting, where despite the morning’s pouring rain about a dozen demonstrators stood outside Manhattan’s Municipal Building for close to an hour, holding signs that read statements such as “BOC: DOC Puppet or Independent Monitor?” and “Will the Board Defend Human Rights, or is it Business as Usual?”

Among the demonstrators was Five Omar Mualimmak, a civil rights advocate and survivor of solitary confinement. He later expressed frustration at the Board’s decision not to immediately reform the DOC’s use of solitary despite evidence of its detrimental effects on the human mind and body. “This is no environment for a 16 year old—or any human being in this great City of New York—to be contained for 23 hours a day for months on end,” Mualimmak said. “As an example to the world, we should be better than this.” 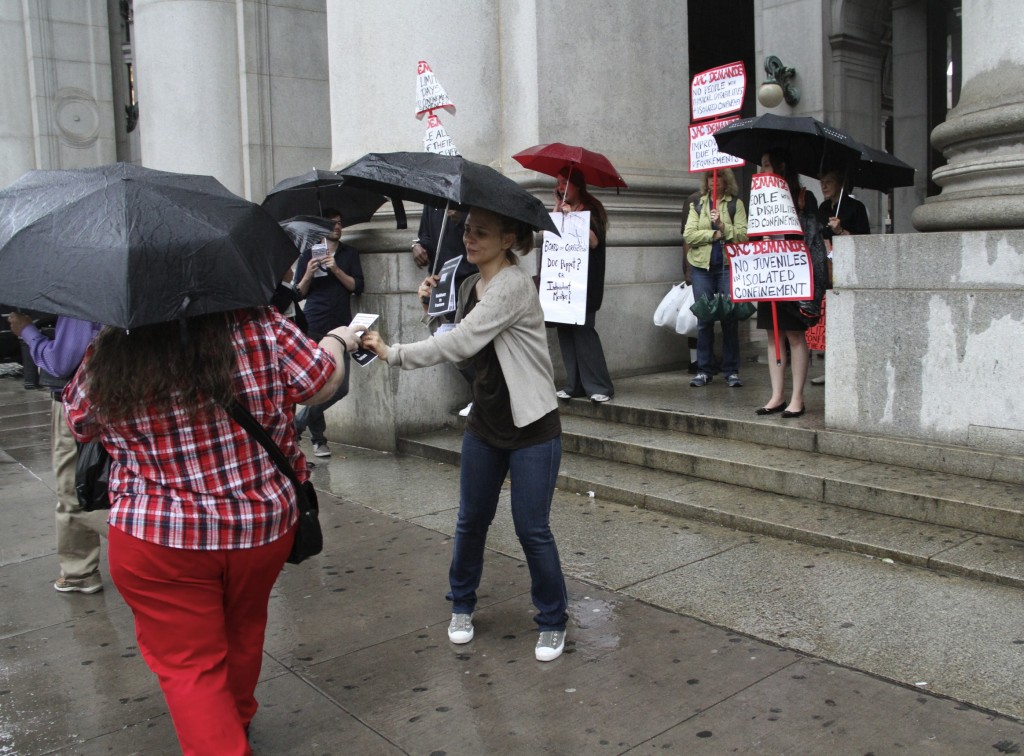