Voices from Solitary: The Loneliest Place in the World 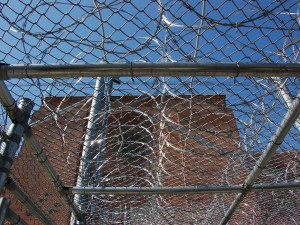 This essay is by Shawn Smith, who is serving time for drug sales and assault in New York. He is one of some 4,500 individuals currently being held in isolated confinement in the state’s prison system. In a letter to Solitary Watch, he writes “I’m so lonely that I dream of human contact with the outside world…and I was hoping that you could find it in your heart to embrace me as a friend and help me get my essay up on your website. So that people can become aware of the levels of injustices and sorrow that has been bestowed upon me involving my solitary confinement experience…I feel so hopeless that I’ve spilled out my heart into this essay and I’m sending it to you in hopes that some change can come to me from it.”  Shawn Smith’s mailing address is #07A1605, Marcy Correctional Facility, 9000 Old River Road, P.O. Box 5000, Marcy, New York 13403-5000. –James Ridgeway

Four walls! A ceiling! And a floor eight by ten feet in dimension! In my eyes, this is the worst torture device in the history of the universe! Within this small enclave many men have fallen apart and broken down mentally into a deep stage of sorrow. That has made us (myself included) drop to our knees with lakes of tears under our eyes that cascade down our face. As we ask God “Why me? Why must I suffer this unbearable pain and burden?”

This place has made me feel so hopeless that I’ve dosed on pills two times and was rushed to the hospital where they pumped my stomach clean of the many painkillers and anti-depression pills that I digested in hopes of going to a better place! I’ve hung up with a self-made noose and sliced my wrist, because this place has driven me to the brink of insanity and I felt like I would rather be dead than live like a dog in a cage at the unwanted animal shelter.

In this place, I’ve lost and found my sanity time and time again. What really shook me up and made me find the inner strength to fight for the willpower to want to live my life and fight to survive in this place was when I saw the COs carry a friend I made in the brother in the cell next-door to me away in a black bag!

I’ve seen this hellhole made many men convert into almost every religious Islam, Judaism, Christianity, Rastafarian, Buddhism, NOI, and an assortment of other beliefs. As they sought to find an inner place of peace within themselves from this day to day madness that the state of New York calls the SHU (special housing unit). I believe I’m in the most inhumane place that has ever housed people since the Nazi concentration camps of World War II. I called this place for the longest a living purgatory. Where racist COs torture us for fun. I can’t believe that I’ve done over 14 years of my life trapped in a tiny space of the world called a cell. That’s more years out of my life that I’ve wasted away locked in solitary confinement than I have as an adult free out in society!

I feel like I’m in a living nightmare! I’m surprised I don’t have any gray hair. I’m surprised I haven’t lost all of my hair… After all of this insanity that I’ve been through. I’ve been rushed, attacked and assaulted by these draconian COs over twenty times! I’ve had nightsticks smashed into my head dozens of times. Boots stomped into my face until it turned black and blue in pure acts of racism. I’ve had so much torture inflicted upon me you would scream like the devil was torturing you if you could feel uses of force that was rendered upon me! I’ve written grievances and complain about this abuse and all has been brushed under the rug by all the upstairs big dog like it never happened. So I work out every day to be prepared for when they decided to run in up my cell or attack me when I’m going to shower. The thoughts never leaves me of all the screaming I’ve heard from all the prisoners I witnessed being beaten. They’ve thrown away all of my property three times and act like they never did it. All of my photos of dead loved ones and of my only memories of the streets. They cruelly threw them away, important items to me that have been discarded like it doesn’t mean a thing to anybody, things I can never get back.

Tears roll down my face in my solitary confinement box where nobody can see and know of my pain and suffering! They have stripped me of everything and treat me anyway they feel like. I’ve written to many officials for help, but I never receive a response and when I do their investigations favorably never find no wrongdoing on their CO Buddies that belongs to their occult of officers.

Sometimes, I stand in front of the mirror and stare at myself trying to find the answers to the questions that be flowing through my brain and I ask myself “Why doesn’t anybody love me?” I know I’m not ugly, I always been considered handsome even define more than a few times. That’s my word, this place got me tripping! I’m so lonely that my heart yearns and aches for some form of human interaction with the outside world. I feel like I’m dead to the world and that I’m a part of a forgotten race. That people out there don’t have no mercy and compassion for us!

I know I’m not a bad person, don’t get me wrong I’ve done my dirt, but I did what I did to survive and on top of that I repented for my wrongdoings. God! My sentence by the judge didn’t include all of this inhumane abuse. Nobody would give this food to their dog at home, but yet they serve this nasty trash to us with the pride of a slave master giving his slaves slop and pig guts! It’s 2013 but nothing has changed over here. I feel like I’m trapped in the 1920s. Did you know that they pay a grown man twelve cents a hour to work like a mule, and at the end of a two week pay cycle he doesn’t even have enough to buy a bottle of lotion, a bar of soap, a deodorant and a bag of chips at this ever price raising commissary? How can they up the prices of commissary items every week but never not once raise their slavery pay wage, which is the lowest of every state prison in this country! Who is allowing them to do this? Why has nothing changed for the better around me? I recently read a Pro Se magazine that said New York State’s solitary confinement is the worst inhumane system in the whole world and this is what I have to live through every day!

One thing this hellhole has given me is the insight to never want to come back to it and the means to guarantee that! Because, throughout this tormenting ordeal I read so many books that I gotten tired of reading them and I started writing my own books. I’ve written seven novels so far. I find that writing takes me to another place mentally and allows me to escape from this torture chamber. Tonight I’m going to try to write in my newest novel I’m creating, but there’s so much noise and arguing I know that’s going to be virtually impossible. The only time in here when it’s peaceful is when the gate monsters or gates bangers are asleep. We call people who love to yell beef and argue over everything and disrespect people locking around them for nothing, gate monsters or gate bangers!

“Damn!” There goes the mail cart again just rolling past my cell, it’s wheels don’t even screech at my door as it smoothly rides by. I can’t believe how people have just neglected me! This box has got me twisted, I be over here just dreaming of getting some mail from somebody who would send sincere like to be my friend, get to know me and help ease my pain from the suffering loneliness that I’m haunted with. I’ve never been this lonely in my life, I feel like my heart is shattered into a million pieces. “Damn!” Here they go arguing again, I can’t even hear myself think. I wish I could just open up a letter from someone who is displaying a genuine interest and concern for my pain, sorrow, and loneliness. “Damn!!!” This is the lonest place in the world!!!!!

8 thoughts on “Voices from Solitary: The Loneliest Place in the World”