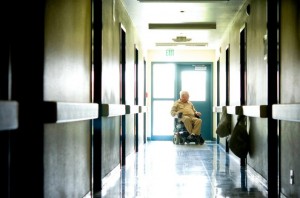 Shawn Fisher, who is serving a life sentence at Massachusetts Correctional Institution–Shirley, has written to Solitary Watch making the argument that the treatment of many elders in prison is in fact a form of solitary confinement. An organization of lifers in Massachusetts has urged the state legislature to adopt some sort of compassionate leave act that would let the old out to die in the free world. There is no hospice in the Massachusetts corrections system. So far, nothing has happened. For more on aging prisoners in Massachusetts, read my article “The Other Death Sentence.”  –James Ridgeway

I would contest that the “Skilled Nursing Facility” (called the Health Services Unit [H.S.U.]) falls under solitary confinement. The cells are 4-5 man wards but they are locked in that ward for 24 hrs a day. They are not permitted to leave the HSU area for any reason. They cannot attend religious services, programs, or Law Library. There are also several single cells that house four permanent inmates. Those inmates are in their cells, alone 24 hours a day. One inmate has nothing but a mattress and a chair in the cell. NOTHING ELSE. He suffers from dementia and stands at his window, talking through the glass to no one in particular for long periods of the day.

Another inmate who suffers from the same thing, lays in his bed all day long, with no one to engage or talk with. The argument can be made that they don’t know where they are, but just the same it is the most inhumane site you will ever witness.

Here at MCI Shirley prison, the effects of the aging prisoner have already had an impact on the population at large. In the last five years several elderly inmates have died in the bowels of the hospital services unit (HSU) called the “skilled nursing facility.” Most, if not all, died alone with nothing but a bed to comfort them in their last days. What’s even more disturbing is oftentimes friends of these men who are housed in the general population do not hear of their passing for days, sometimes weeks later. For some this may seem like a trivial matter but it is indicative of a more serious issue that is slowly taking root among many of the lifer population; hopelessness, particularly the younger men serving life sentences.

Policies enacted here at MCI Shirley prohibit inmates from visiting anyone housed in HSU area, that is, unless they work in the HSU as runners. This policy further prohibits anyone who lives in the HSU from leaving the HSU to attend programs, library, and religious services; in effect punishing individuals for being sick. Many of these men have served 10, 20 and 30+ years in prison. In that time some have lost contact with family and friends who live on the outside. In most cases, they’ve been incarcerated for so long that there’s just nobody left to contact. In almost every instance these men have formed bonds with other prisoners that they’ve serve time with—creating a family unit amongst each other. Men serving long term sentences serve more time living together than the ideal family unit, and yet, when one becomes sick it’s very likely that neither of them will see each other again.

Imagine being told that a hospitalized “family” member is not your concern, nor can you visit them! Imagine being that individual who is terminally ill and knowing that you can no longer see, talk, or spend time with the very person you care for and consider “family.” It is a dire situation that the younger population sees and realizes, “this is what my future holds for me!” The hopelessness that instills deep within one’s soul is palpable. To know that the only thing you have to look forward to at the end of your days is not friends or family or religious community, but rather, a bed and four walls which the D.O.C. considers a humane way to die.

The restrictive policy of denying ill prisoners a sense of humanity in their dying days creates a climate of hopelessness that in turn creates resentment toward a system they truly feel is “killing them.” So much so, that this dark, bleak, and foreboding outlook has become a reality to them. This “reality” has generated conversations among lifers that no one should ever have to have. Some of the men have expressed a desire to commit suicide before they get to that stage; some have even made pacts with someone they know to have them be smothered with a pillow; some have even gone so far as to make promises to one another that they will slip the other some medication to die of an overdose. In many instance inmates are refusing treatment and refusing to seek medical attention so as to avert being placed in the HSU area. The idiom among the men is to refer to HSU placement as a “death sentence.”