Opposing the Architecture of Isolation: Architects Against Solitary Confinement

Raphael Sperry is an architect, green building consultant, teacher, and outspoken advocate on the role of architecture in social justice issues. He founded and directs the “Alternatives to Incarceration / Prison Design Boycott Campaign” of the non-profit Architects/Designers/Planners for Social Responsibility (ADPSR) and has presented his research at numerous professional association conventions and architecture schools. He teaches the Green Architecture studio at Stanford University’s Architectural Design program and has championed sustainability strategies for a wide variety of institutional and commercial projects. Sperry was named a 2012 Soros Justice Fellow for the project he describes in the following essay, which originally appeared on the website of the Open Society Foundations. 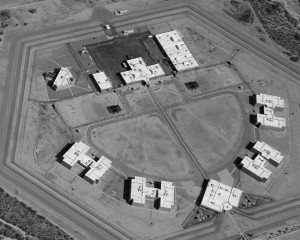 When I say that I’m an architect researching criminal justice, many people think that I want to design “better” prisons. In fact, I want architects to stop designing supermax prisons altogether. As the incoming president of the small non-profit organization Architects/Designers/Planners for Social Responsibility, I have just launched a campaign asking my mainstream professional organization, the American Institute of Architects (AIA), to amend its code of ethics to ban the design of spaces intended for execution and prolonged solitary confinement.At its root, this is a human rights campaign. The human rights community agrees that the death penalty should be ended and that prolonged solitary confinement is a form of torture. AIA’s code of ethics already calls on architects to “uphold human rights in all their professional endeavors,” and so  you might think that this would be a relatively simple amendment. But this ethics code is not currently enforceable; a new 500-bed solitary isolation prison is now out for design bids in Arizona and as recently as 2010, the State of California redesigned and rebuilt their death chamber. I am hopeful that AIA will do the right thing, but know that there is a fear of challenging government and general misconceptions about the public’s view of the death penalty and harsh treatment of prisoners. Many architects will need to more fully understand the issues before things can change.

I have begun contacting chapters of the AIA and other architecture and design organizations, looking for opportunities to speak to their members and encourage their decision-makers to consider endorsing our campaign. AIA is a member-oriented organization, but architects hold public licenses and have public responsibilities. We care about public opinion.

Professional responsibility is a major theme of this campaign. Architects are responsible for, among other things, protecting public “health, safety, and welfare” in the buildings we design. It shouldn’t be asking too much to ensure that our buildings aren’t intended to hurt or kill members of the public. In this respect, I take inspiration from doctors and nurses. Their professional associations prohibit members from participating in executions or torture. Medical professionals understand that they cannot agree to government requests to hurt or kill their patients; it would violate their ethics. I expect that public respect for architects will increase as we expand our own commitment to human rights.

At the deepest level, this campaign challenges the culture of violence that infects our society. The easy acceptance of violence as a legitimate way to solve problems extends from the interpersonal level – evidenced in the frequency of mass shootings in the U.S. – to the international level – where we see the U.S. engaged in a continual pattern of warfare, bombing, and military coercion. In U.S. domestic governance and community life, this culture has led to misguided “tough on crime” policies. State-led violence does not solve the problem of personal violence; it actually reinforces it. Violence won’t end through the application of superior force by police or through building increasingly punitive prisons. Instead, we must build a culture of non-violence. As one man recently released after serving many years for a murder conviction put it (speaking at a panel organized by Soros Justice fellow Nancy Mullane), the state shouldn’t be setting a bad example for our children about how to respond to someone who has caused harm.

Prisons are the concrete and steel forms of our culture of violence. Execution chambers and supermax prisons in particular are the harshest buildings we create. They are supposed to handle “the worst of the worst,” but the way I see it, these buildings themselves are the worst of a bad lot. These buildings, when operated as intended, violate human rights. They also make possible the system of mass incarceration that perpetuates violence, racism, poverty, and other social injustices.

Ending the culture of violence and building a society based on mutual respect, tolerance, and love is a tall order. But I believe that to move forward, everyone to find a way to do their part. I’m hoping that, with enough public support and private reflection, AIA’s leaders will see that the profession of architecture can take this step.

23 thoughts on “Opposing the Architecture of Isolation: Architects Against Solitary Confinement”