Voices from Solitary: The Louder My Voice the Deeper They Bury Me

The following poem is by Herman Wallace, who has been held in solitary confinement in Louisiana’s prison system for almost 41 years, mostly in the Louisiana State Penitentiary, known as Angola. Convicted of killing a guard at Angola, Wallace and fellow prisoner Albert Woodfox, both members of the Angola 3, were placed in solitary in 1972, where, with the exception of a few brief periods, they have remained ever since (read more about Wallace, Woodfox and the Angola 3). Wallace is now housed in a maximum security prison near Baton Rouge, subjected to conditions which some claim are worse than those at Angola.

In his poem, “A Defined Voice,” Wallace describes being moved to levels of varying security, each more restrictive and oppressive than the one before. The “Supermax of Camp J” refers to the most punitive solitary confinement unit at Angola.) He asserts that, try as they might, his handlers are unsuccessful in their efforts to destroy his spirit−which on the contrary, grows ever-stronger. Listen to Herman Wallace read “A Defined Voice.” —Lisa Dawson 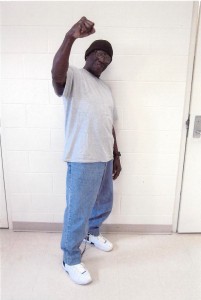 They removed my whisper from general population

To maximum security I gained a voice

They removed my voice from maximum security

They removed my voice from administrative segregation

My voice became vibration for unity

They removed my voice from solitary confinement

To the Supermax of Camp J

And now they wish to destroy me

The louder my voice the deeper they bury me

I SAID, THE LOUDER MY VOICE THE DEEPER THEY BURY ME!

Free all political prisoners, prisoners of war, prisoner of consciousness.

4 thoughts on “Voices from Solitary: The Louder My Voice the Deeper They Bury Me”