Sarah Shourd is a writer, educator and prison rights advocate currently based in Oakland, California. She had been living in the Middle East for over a year, teaching Iraqi refugees and living in a Palestinian refugee camp in Syria, when she was captured by Iranian forces somewhere along an unmarked border between Iran and Iraq in July 2009, and held in solitary confinement for 410 days. She has written for the New York Times, CNN, and Newsweek’s Daily Beast and is currently writing a book with Shane Bauer and Josh Fattal about their experience as hostages in Iran.

The following essay was written as an introduction to a report released last week by Physicians for Human Rights, on the use of solitary confinement on people held in federal immigrant detention facilities. It is reprinted here by permission of Sarah Shourd and PHR. 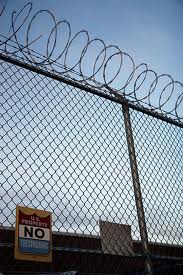 Sitting in a nearly empty cell — a metal sink, the blank stare of the white walls, fluorescent lights that never turn off — all you have are your own thoughts. Sometimes they race through your head like freight trains; other times a thought can get stuck in a loop, tormenting you for days or weeks at a time, grating the inside of your skull like metal on flesh. Your days are restless, your eyes constantly wandering around your cell, and you never, ever stop asking yourself — when am I going to get out?

The Iranian government held me in solitary confinement for 410 days. For that entire time I was imprisoned alongside my now-husband Shane Bauer and our friend Josh Fattal. We were captured on July 31, 2009, while hiking behind a waterfall in the proximity of an unmarked border between Iraq and Iran. I was on a break from my teaching job in Damascus, Syria — our friend Josh was visiting from the States — and we decided to travel to the semi-autonomous Iraqi region of Kurdistan, a part of the Middle East with a burgeoning tourist industry where the mountains are unusually green and no American has been killed or kidnapped in recent decades.

The soldiers drove us to Evin Prison in Tehran, where for 131⁄2 months I spent 23 hours a day in a private cell and one hour in a slightly larger open-ceiling cell, where a camera watched as I ran in circles under a blue sky crisscrossed with thick bars. They said the isolation was for my own safety — that there were no “appropriate” cellmates for me — but I was never safe from my own mind.

In prolonged isolation, the human psyche slowly self-destructs. On my worst days, I screamed and beat at the walls. I experienced hallucinations — bright flashing lights and phantom footsteps — nightmares, insomnia, heart palpitations, lethargy, clinical depression, and passive suicidal thoughts. I would pace my cell incessantly, or crouch like an animal by the food slot at the bottom of my cell door, listening for any sound to distract me. When I finally got books and television, I found it difficult to concentrate. I would sometimes spend an entire afternoon trying to read the same page, until I got fed up and threw my book against the wall.

The only thing I thought about for over a year in solitary was the day that I would no longer have to be alone, but, ironically, it wasn’t that simple. When I was finally released, I found it hard to make eye contact or be touched. My breathing remained labored and many of the symptoms I experienced in prison — insomnia, hypertension, and anxiety — persisted on the outside. Like many people with post-traumatic stress disorder, I sometimes drank too much to try and escape my symptoms. More than once I became belligerent, dangerously paranoid, or hopelessly depressed — sometimes walling myself up in my house for days at a time.

When I began to research the use of solitary confinement in the United States, I was shocked to learn that tens of thousands of people are subject to no-touch torture or prolonged isolation on any given day. I learned that immigrants and people deemed a “national security risk” are held in indefinite detention without legal representation or the right to due process, just like I had been. How could I fail to draw a connection between their treatment and my own?

When Josh, Shane, and I were picked up near the unmarked Iran-Iraq border, the instant the soldiers looked at our passports it was clear the odds were stacked against us. Due to decades of animosity between our governments, being an American under suspicion by the Iranian government puts you at a distinct disadvantage. Likewise, being profiled as “illegal” — an immigrant living without papers in the United States– puts you at a disadvantage in our legal system. You can be subject to “civil” confinement in conditions identical to prison — including solitary confinement, which is often applied arbitrarily as a disciplinary measure — for months or years in pretrial detention and ultimately deportation as the result of something as small as a traffic violation.

A host of factors — many of which I experienced myself as a foreigner imprisoned in Iran — can add to harmful psychological effects of isolation for immigrant and national security detainees. One is language — when I was arrested I didn’t speak a word of Farsi. Even after over a year in detention I could barely communicate my basic needs. Likewise, many detainees in our country aren’t fluent in or can’t speak English. Not being able to speak the language of the guards and other prison and legal authorities puts detainees at a distinct disadvantage. It increases isolation — effectively walling you off from what little opportunity you have for social interaction — and also makes it harder to secure a lawyer, advocate for your rights, challenge your conditions, and defend yourself effectively in court.

In addition, immigrant and national security detainees are often victims of prejudice and racism while in detention based on their “illegal” status, race, ethnicity, or country of origin. When I was in prison, a certain Iranian guard refused to touch or speak to me. Every day, she made me pick up my tray of food from the floor, rather than handing it to me as she did for the other prisoners. Once, I got angry and confronted her with the help of another guard who spoke some English. I asked her why she hated me. She said it was because I was “American… and I crossed the border.” The situation is not all that different for immigrant and national security detainees in the United States, especially considering that the dominant discourse in the country labels them as “terrorists” or “illegals” — a few examples among a trove of unsavory xenophobic and racist expletives — based on the widely held belief that they are our ideological enemies and/or the source of our country’s economic woes.

Even though — like many detainees in our country — I had no idea when I would get out of solitary confinement or prison itself, I never lost hope completely. I knew that our case was visible enough that we would never be forgotten, that countless people were fighting for us on the outside, and that eventually the Iranian government would be forced to let us go. For immigrant and national security detainees in this county, however, the opposite is true. They have no way of knowing how long it will take before they have their day in court or what the outcome will be. Their isolation alone is enough to cause lasting, irreparable psychological damage, yet they are also subject to prejudice, unable to communicate, and transported against their wills to detention facilities sometimes hundreds or even thousands of miles from home — essentially invisible. My situation was unique and in many ways unprecedented. Sadly, however, being stripped of one’s rights, deprived of liberty, and treated like a criminal solely on the basis of one’s country of origin is far from unusual, even in our own backyard.