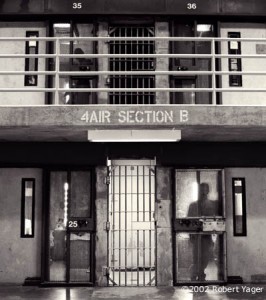 The following was written by Chris Yingling, reflecting upon the  three years he spent in California State Prison, Corcoran’s Security Housing unit from 1994 to 1996. He was subsequently transferred to Pelican Bay State Prison “when the Feds set up shop at Corcoran because of the gladiator fights.” The “gladiator fights” were the subject of federal investigation following widespread reports of prison guards setting up fights between rival prisoners, fights that Yingling reports he was a part of. He reports lingering psychological difficulties resulting from his time in the California prison system. “I suffer depression, and harbor some serious resentments toward our corrections system. I have rage. Every once in awhile ill come to tears over the way humans treat each other,” he says.

Yingling contacted Solitary Watch after reading an article about the 2011 suicide of Pelican Bay administrative segregation inmate Alex Machado. Yingling and Machado had met each other in the California Youth Authority in the late 1980s. He told Solitary Watch, “I read this article just prior to reading my kids a bedtime story and it brought it all back. I know more stuff about Alex that I saw that no human should have to endure much less a 15 year old kid. He did not have an easy life. May god rest his soul. I will remember Alex. I am no longer in chains.” –Sal Rodriguez

In white jumpsuits chained in groups of four

they pulled our bus onto the yard

made to face a concrete wall

two gunners and many a guard

10 toes, your chin and chest

keep upon that wall

unlock your knees it’s a 105 degrees

if one goes down you all fall

welcome to the SHU this is hell

you committed a crime in CDC

don’t fuck around we’ll put a bullet in you

In a very short time you will see.

What is your name? Why are you in the shu?

I caused Great bodily injury in a riot.

He slammed my face against the wall

The rest of the line still and quiet.

One man was pulled right off the chain

He was surrounded and beaten a long time

they removed the waist chain choking me with a stick

the cuffs bit into my hand

they pulled my jumpsuit around my knees

What I experienced for the next 3 years

Made me wish I could die

Although physically I left in one piece

Parts of my mind did not survive.

Men were shot, men were stabbed

Some guys lost their minds

We had to fight while they shot at us

Because my life is so much different today

I was 21 years old when I stood on that wall

Not trying to act tough or exaggerate the facts

Just wanna get out what’s inside

I was only a kid trying to get through

They made me hate and hurt my pride

That is just another criminal enterprise

I understand these people did bad things

My own part I now see and realize.

prejudice and mistreatment is not an answer

our society doesn’t just doesn’t have a cold

we got mother fuckin cancer!

So I lean toward the left in my political views

Because I saw too damn much of “the right”

Biases interfere with things of this nature

If you think that I’m biased you’re right.