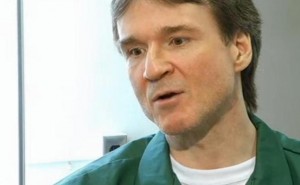 On March 11, we published an essay entitled “A Sentence Worse Than Death” by William Blake, who has been held in solitary confinement in New York State prisons for close to 26 years. Since we posted the essay, it has received more than 150,000 hits on Solitary Watch alone–and many more, no doubt, on the numerous sites around the world that reprinted or excerpted from it.

Considering the interest in Billy Blake and his writing, we are republishing here an account of a visit to Blake in the Special Housing Unit (SHU) visiting room at Elmira Correctional Facility in south central New York. (A somewhat shorter version of this account appeared in our July 2012 article in The Nation, “New York’s Black Sites.”)

First, some background: In 1987, while in county court on a drug charge, Blake, then 23, grabbed a gun from a sheriff’s deputy and, in a failed escape attempt, murdered one deputy and wounded another. He is now 49 years old, and is serving a sentence of 77 years to life. As a cop-killer and an escape risk, Blake is considered a permanent threat to prison safety. For this reason, he is one of the few New York prisoners in “administrative” rather than “disciplinary” segregation—meaning he’s in solitary more or less indefinitely, despite periodic pro forma reviews of his status.

We visited Blake in December 2011 at the Elmira Correctional Facility, a dreary building on a hill near the edge of town. After being signed in and searched, we stopped at the vending machines to buy what he had requested in a letter: Dr. Pepper and a pizza roll. (The machine was out, so we got a grayish-looking cheese steak instead.) We then waited in a special SHU visiting room, watched over by a guard.

Blake entered—wiry, sandy-haired and smiling—and talked virtually nonstop for three hours. It was the first time he’d had a visit in more than two years. We discussed his childhood (he says his mother’s partner was abusive), his poetry (some of which he recites by heart), his love of playing the stock market (he sometimes gives tips to the guards), and his fascination with military history (his dream is to someday walk the battlefields at Omaha Beach and Thermopylae). He described abuse in the SHU, some of it confirmed by a lawsuit he won in 2000. And he told us how bad he feels about having deprived two children of their father when “the one thing I never wanted to do was hurt kids.”

Blake’s subsequent letters, which run twenty-five pages or more, describe his “magic ingredient” for surviving the Box. “I’m a consummate dreamer,” he writes. “I’m a dreamer who refuses to accept that my dreams won’t all come true, some however eventually. I’m the kind of guy who you can give 3 life bids to, still in the box for a quarter century, beat me, make me in shit, literally freeze me, spit on me and take my clothes and leave me naked, even steal my money and leave me broke and after all that I’ll be thinking ‘OK, things are a bit tough presently, kid. But suck it up. Stay strong because better days will be here soon and you are gonna be shining and telling.'”

This illogical hope, Blake writes, is what keeps him from committing suicide: “I’m not sure I’d even know how to quit. I’ve had the thoughts at bad times—real bad times—that’s true. But… I’m too nosy. I want to see how this mad life of mine is going to turn.”

Blake reports that he sleeps all day and stays awake all night “to avoid the bulk of the madness that goes on” in the SHU. “It’s lonely time though and boring time like only SHU can be boring—which is boredom of a kind that nobody out there could ever comprehend unless they had lived in the box before…Sometimes I read till my eyes go blurry, till I’ve got nothing left in my cell to read and I don’t have any more letters to write because I’ve bothered the few people I write too much already, and then I am out of things to do,” he writes, so “I just sit and watch the cockroaches on the company go by…Sometimes I will go into a sort of stupid state, a fugue you’d call it, where I’m really not thinking anything at all, just watching the black spots move on the floor.” The lights will come on in the morning, “And I don’t even remember having one thought for the whole night.”

Dreaming is what helps him get through the long, colorless nights in the SHU. “Sometimes I watch the roaches and I envy them,” he writes.

In my mind I have fantasized that I was a cockroach and I maneuver all through the halls of the prison, walk under the locked gates and stay close to the walls to avoid being stepped on by a CO who’s walking through the prison. Then I get outside through some crack or under some door, walk through the grass that looks like tall trees to me, my being a roach and small, then I’m up and over the wall and out.  Once I make it, I pop myself back to being human and I walk off into the night, free again and not even caring if I die that same night, just as long as I can see some trees and feel a breeze and know for an hour or two that I was free again, that I lived to see the outside of prison before my time in this world would be over.

37 thoughts on “Visiting Billy Blake After 25 Years in Solitary”