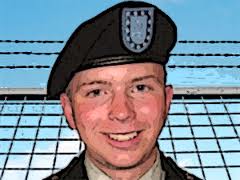 David E. Coombs, attorney for accused Wikileaker Bradley Manning, has made public a motion “to dismiss all charges owing to the unlawful pretrial punishment to which PFC Manning was subjected while at Marine Corps Base, Quantico.” Manning spent close to nine months in solitary confinement in the Brig at Quantico, from July 2010 to April 2011, before being transferred into less restrictive conditions at Fort Leavenworth.

Manning was held in conditions that were denounced as “cruel, inhuman, and degrading treatment” by UN Special Rapporteur on Torture Juan Mendez. His lawyer is now arguing that they were also in “flagrant violation” of military code. Keep in mind that Manning had not–and still has not–been convicted of any crime, nor had he been accused of any disciplinary violations while in custody.

According to the motion, as summarzied on Coombs’s website, “a decision had been made early on at Quantico to keep PFC Manning in MAX Custody and in Prevention of Injury (POI) status — in effect, the functional equivalent of solitary confinement.” The motion further argues that “Multiple psychiatrists at the Quantico Brig recommended for almost nine months that PFC Manning be downgraded from POI status.  The psychiatrists informed Quantico Brig officials that PFC Manning’s POI status was not warranted because he did not present a risk to himself and that the POI status was actually causing PFC Manning psychological harm.  The psychiatrists’ recommendations were outright ignored by Quantico officials.”

The defense claims it has documents that “reveal that the senior Brig officer who ordered PFC Manning to be held in MAX and in POI was receiving his marching orders from a three-star general. They also reveal that everyone at Quantico was complicit in the unlawful pretrial punishment, from senior officers to enlisted marines.”

Many aspects of Bradley Manning’s conditions of confinement at Quantico will sound familiar to the tens of thousands of American prisoners who have spent time in solitary confinement in supermax prisons and Special Housing Units. Additional restrictions were put in place supposedly because he was at risk of harming himself, though they in fact seem only to have added to his torture. According to the summary of the motion:

According to the complaint, at one point, after he suffered an apparent anxiety attack and then protested his conditions, a Brig official “placed PFC Manning in Suicide Risk status, over the recommendation of a Brig psychiatrist.” For two days he was confined to his cell, permitted to wear only his underwear during the day, and forced to sleep naked at night; his eyeglasses were also taken away. After he complained about his conditions again, Manning was “required to wear a heavy and restrictive suicide smock which irritated his skin and, on one occasion, almost choked him.”

As Matt Williams writes at the Guardian:

The defence motion is brought under Article 13 of the Uniform Code of Military Justice. It states that “no person, while being held for trial, may be subjected to punishment or penalty other than arrest or confinement upon the charges pending against him, nor shall the arrest or confinement imposed upon him be any more rigorous than the circumstances required to insure his presence.”Under Article 13, if a judge decides that a member of the armed forces has been illegally punished before trial, he can grant the prisoner credit on the amount of time they have already served in custody, or can even dismiss all charges outright.

For more detailed readings of the motion, see Kevin Gosztola’s blog at Firedoglake and Kim Zetter’s post on Wired.