Suicide in Solitary: The Death of Alex Machado 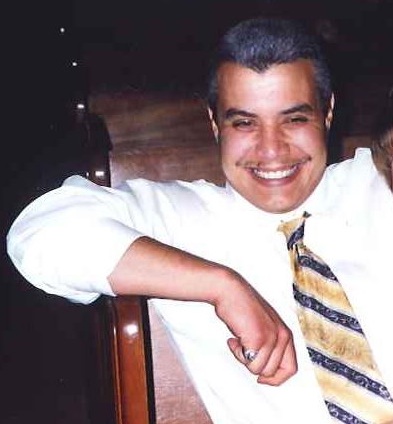 Alexis “Alex” Machado was a prisoner at Pelican Bay State Prison’s isolation units for nearly two years when he took his own life on October 24, 2011.

According to the autopsy report, Machado was last seen alive at approximately 12:15 AM “as he was examined and then cleared by medical staff for a complaint of heart palpitations.” Thirty minutes later, at 12:45 AM, an officer found Machado and reported that “….Machado [was] hanging inside his cell…” He was seen “sitting on the floor with a sheet tied to his neck and the sheet tied to the top bunk.”

Concluded the autopsy: “The decedent died as a result of asphyxiation due to strangulation by hanging.” Toxicology reports were negative.

As institutional records and letters from Machado in the year leading up to his death show, he had been suffering severe psychological problems in response to his prolonged isolation. Once a jailhouse lawyer whose writings were both clearly and intelligently composed, his mental state would decline at Pelican Bay.

Machado had been incarcerated since 1999 on a robbery charge and a related shooting. He was sentenced to an 80-to-life prison term. Described as an intelligent and thoughtful man with a warm smile by his sister, Cynthia, he generally experienced no problems in his initial 11 years of incarceration. For most of his time, he was held at Kern Valley State Prison.

Things began to change in late 2007, when a race riot took place. “The prison said he was the one who started the riot,” according to Cynthia, “when he really had nothing to do with it.”

His involvement in the riot would result in his being placed in Administrative Segregation Unit (ASU) in December 2007. Though he was never officially found guilty for the riot, prison gang investigators would begin to build a case for his validation as a gang member. In December 2008, he was placed in the ASU again for “manufacturing a weapon”; in January 2009, a confidential informant was officially cited by prison officials as evidence of his gang activity.

He was finally validated as a gang associate, in large part due to the confidential informant, on February 4th, 2010.  In his appeal of the validation, he argued that the source items used in his validation were insufficient, saying that “these allegations are not true and I initiated nothing.”

Drawing by Machado of his niece

He further charged in his appeal that his validation as a gang member was in retaliation for his acquittal in the racial riot case.

He was sent to Pelican Bay to serve an indeterminate SHU sentence on February 17th, 2010 from the Kern Valley ASU.

Being screened into Pelican Bay, he reported no psychological problems.

Soon after arriving, however, he reported in letters that he was consistently harassed by the guards. In a letter dated March 10th, 2010, he wrote that “when I first got here an officer told me that he was being pressured to make a bogus psychologist referral on me…I guess they want to make it look like I am going crazy.” He reported that guards took him to debrief in an attempt to make him look like an informant. Further, he was told that a green light (hit order) had been placed on him; a claim that he didn’t believe.

An ASU classification document indicates that he received some mental health services in May 2010, and previously in October 2009.

A mental health chronos indicates his first significant problem at Pelican Bay surfaced on January 24, 2011 with a mental health referral from a correctional officer for paranoia.” Also beginning in January, he was noted to have decreased the number of showers he took, from a regular of three a week to only once or twice a week.

He received a 115 (rules violation report) on March 1, 2011 for  “willfully resisting” officers after a “fishing line” for communication with other inmates was found and he refused to “cuff up.” He told the health care worker who saw him after his extraction with pepper spray that “I want you to put down that they are denying my legal mail.”

On May 31st, a mental health referral reported that he “stated he is being watched, listened to, cell has bugs and cameras. He also stated he hears knocking on all his cell walls.”

Things would decline significantly in June. On June 5th, a mental health record reports that he was depressed, anxious, poor hygiene/grooming, hallucinations, paranoia and delusion. He reported that is presenting complaints were listed as “hearing voices, can’t sleep anxiety a ttacks, someone/something controlling thoughts, hasn’t cleaned cell in three days.”

Days later he would receive another referral for anxiety and reporting increased heart rate and breathing. On June 12th, he was placed in a crisis room for threatening to kill himself.

The following is from a Counseling Chrono dated June 21, 2011:

On Thursday, June 16, 2011 at 1440 hours I was summoned to the cell of Inmate Machado…by Registered Nurse…Upon looking in the cell window, I observed a noose hanging from the air duct. I observed the No-Tear Mattress lying on the cell floor torn apart. I ordered Machado to submit to handcuffs, to which he complied. After handcuffing Machado I placed him in holding cell #136 so Dr. N could speak with him. I returned to cell 188 and observed feces smeared on the right wall. It appears Machado had torn off the outer layer of the mattress, fashioned a noose from it, and tied the noose to the vent…

Just days after the incident, he was issued a notice that he would be placed in Pelican Bay’s Administrative Segregation Unit:

You were endorsed by the CSR on 02/04/10 to serve an indeterminate SHU term, due to your validation as an Associate of the …prison gang…On 06/22/11, your Mental Health Level of Care (LOC) was elevated to Correctional Clinical Case Management (CCCMS), PBSP-SHU Exclusionary; therefore, your placement in PBSP-SHU is no longer appropriate. Due to the above, on 06/22/11, a decision was made to place you in the PBSP Administrative Segregation Unit. Single celled due to prison gang validation.

By June 30th, he was deemed to have “active psychotic symptoms” but had a low risk of suicide.

On July 6th, he threw his breakfast through his food port and refused breakfast the next day. On the date of the incident a referral indicated “inappropriate behaviors”, “hallucinating” and “poor impulse control.” The referral notes that he believed “electromagnetic pulses are interfering with his thoughts.”

A mental health document says later that “[he] is believed to be in a desperate situation with an equal amount of anxiety. During ICC in Ad Seg, he refused the debriefing process; hence his situation appears to be deteriorating possibly leading to [his] current state of mind.”

In June and July, he was variously diagnosed with Antisocial Personality Disorder and Brief Psychotic Disorder. According to his sister, though he was officially granted a vegetarian diet for religious reasons, he would primarily subsist on an unhealthy cheese-only diet due to his being allergic to peanuts, the other primary component of a prison vegetarian food tray. This is believed by his sister to have been one of the factors that contributed to the already physically and mentally stressful environment. 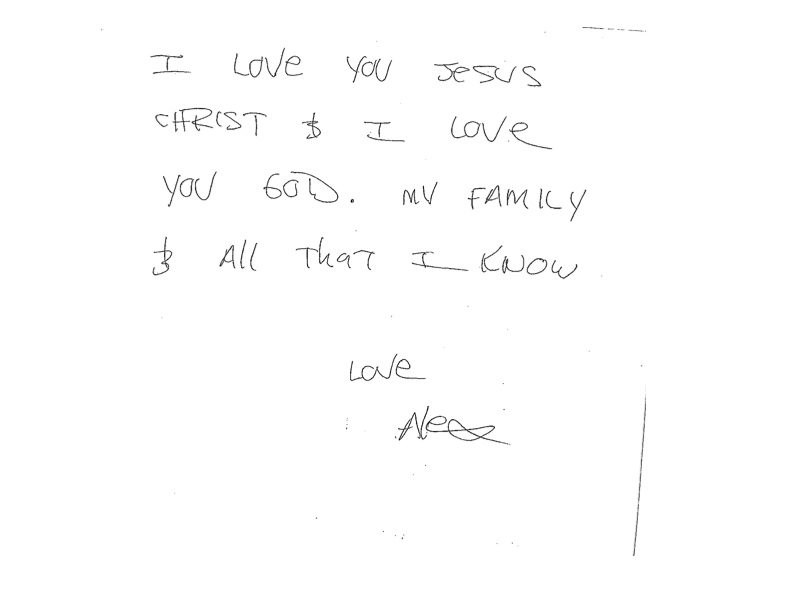 Machado’s sister noticed her once coherent and seemingly adjusted brother decline in his time at Pelican Bay. “I noticed he started writing strange things, about seeing things,” she says. Around this time, she and her mother called Pelican Bay after receiving a despondent letter from Alex. “I’m afraid for my sons life,” Machado’s mother told one of his mental health counselors.

Though CDCR has previously gone on the record to say that he was not a participant in the hunger strikes, the Machado family believes that he in fact did participate in the strikes. He reportedly mentioned the strike many times in letters sent to his family.

In late July or early August, he sent a letter to his sister claiming that he saw “someone I know and I saw another in pieces and demons…I don’t know the significance of it…I hope it was a hallucination.” He wrote that was taken to the infirmary for leg pains, where he further wrote:

I was handcuffed in a cell and was being watched by two officers I never seen before…I was handcuffed for what seemed like an eternity. I felt like I was in that room handcuffed for days but it was only an hour…the shooting in my case flashed in my mind and they suggested I died that day in the shooting and that I was now in ‘purgatory’ or in ‘Dantes Inferno.’ I felt trapped. I thought I was condemned to be handcuffed in that cell forever. They made me believe I was killed in real life. I thought I was caught in another realm. I saw insects in the cell and demons. It was way out I don’t know what happened…

Also written while at Pelican Bay, Machado reflected on his decade long incarceration, writing “I wish my life was different and that we could all be out there together…I don’t know what to do. I’m stuck and I have been away from home for a long time now.”

In the final months of his life, he would continue to spend over 22 hours a day in a small cell. His letters came less and less frequently. During his time at Pelican Bay, he told his family not to make the over 700-mile trip to visit him. He didn’t want them to see him in chains.

Though his letters in the two months leading to his death were increasingly distorted, he did have some glimmer of hope. He had secured a lawyer who was in the process of challenging his original criminal conviction.

His sister describes his plight this way,

“It takes one inmate informant to report you falsely. Then you are in solitary confinement. When you want to fight to get out it is impossible because of all the torture that goes on in there physically and mentally.”

After years of isolation, paranoia, and gradual deterioration, he took his life.

“He was a loving brother, son, and uncle…raised by a single mother and got lost in the system,” says Cynthia. “He wanted to be treated fair.”

15 thoughts on “Suicide in Solitary: The Death of Alex Machado”