Last month we wrote about the release of Susan Greene’s remarkable article and accompanying video called “The Gray Box“–one of the most powerful and comprehensive pieces of investigative reporting that has ever been done about solitary confinement in America.

Next week, the publisher of “The Gray Box,” the Dart Society–an organization of journalists who cover trauma, conflict, and human rights–will sponsor an event in New York. In addition to Susan Greene, it features Solitary Watch’s own James Ridgeway; Brian Nelson, who spent time inside Tamms supermax; Laura Rovner, who has filed groundbreaking lawsuits challenging solitary confinement; and Katherine Sanguinetti of the Colorado DOC.

The event is cosponsered by John Jay College’s Center on Media, Crime and Justice, and will take place at the college on the afternoon of Thursday, March 15. It is free and open to the public but space is limited, so it is necessary to R.s.v.p.–see details in the following flyer. 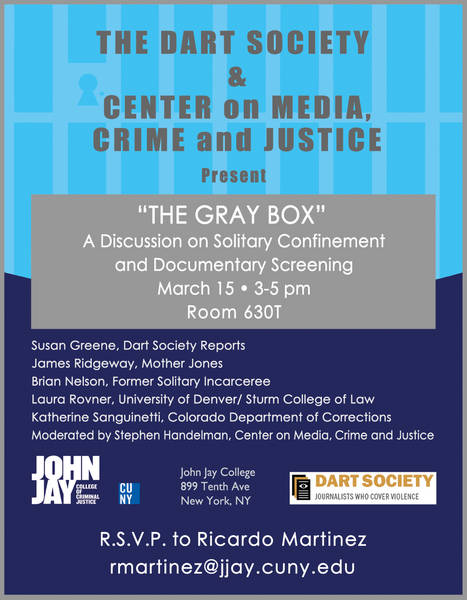