Jesuit priest and peace activist Father Bill Bichsel is reportedly being held in solitary confinement at SeaTac Federal Detention Center south of Seattle. According to friends, Bichsel has not eaten solid food since January 10 in protest of his treatment.

Fr. Bichsel, known to friends and colleagues as “Bix,” is a member of the Disarm Now Plowshares group. He has been arrested several times in connection with nonviolent civil disobedience at military bases, nuclear weapons manufacturers, and the School of the Americas. Most recently, he served a three-month sentence at SeaTac for a July 2010 action at the Y-12 National Security Complex in Oak Ridge, Tennessee, future site of a new nuclear weapons plant.

On January 10, Bichsel was moved to a halfway house in Tacoma. According to the Disarm Now Plowshares blog, he was told that the facility had a rule prohibiting visitors for the first 72 hours of residency.  But on the evening of his arrival, a pair of Buddhist monks and a small group of students, on their way to a local protest, “made a small detour and stopped by the house Bix was in, to drum and pray for him outside the building for a few minutes.” The blog continues:

Bix was very happy to see and hear all who came to visit and wanted either to invite everyone in or go out and be with them. He had a strong sense they were angels, which gave him intense joy. He went onto comment that “it was so right they should be there.”

His captors on the other hand had a slightly different experience. First reprimanding him for being out of compliance (whatever that meant), he was told he was going to be “written up” and what happened was to be “reported.” The rest is history – in early morning he was suddenly awakened, grabbed out of bed, shackled, and returned to SeaTac by the marshals.

Their actions and manner of treatment made it known to him how he would proceed. Upon his arrival at SeaTac he made it clear he intended to be in complete non compliance with their demands; their recourse, which was to be expected, would be to place him in “protective custody or the special housing unit (SHU)”…“the hole”!

Bichsel, who suffers from circulation problems as well as a heart condition, reported to friends that it was “very cold for me all of the time” in his SHU cell at SeaTac, and that he was going “24 hours a day without sleep, fighting off the chill. I have asked for a jacket or a pillow or a mattress; they do not comply.” After supporters held a candlelight vigil outside of the prison last week, he was provided with additional blankets.

According to an article in the National Catholic Reporter, “A spokesman for the Federal Bureau of Prisons said that while he couldn’t comment on the case of a specific inmate, he did say that the ‘typical issue’ for all inmates in the federal system is a blanket and sheet, and that there is a ‘full health services staff on duty at all of our facilities.” A public information officer for the BOP told the paper: “’If we receive information either from the inmate or the inmate’s doctor on the street that there was some sort of pre-existing condition that was being treated, obviously we would pick up the ball from there.’”

Several other religious peace activists have been held in solitary confinement at the SeaTac SHU in recent years. They include members of a group of others (all of them over 60 years old) who in 2009 broke into the Kitsap-Bangor Naval Base outside Seattle, where nuclear submarines are kept. At their trial for trespassing and conspiracy, the judge criticized the defendents’ “lack of remorse” and called their protest “a form of anarchy” that could lead to a “breakdown in the social order.”

According to fellow activist Blake Kermer, who visited Bichsel on Saturday, “Bix wants everyone to know that as he continues on his fast – yesterday was his eleventh day – that he feels stronger and more confirmed in his resolution…Bix says that Christians can unite in conscience where God speaks to all of us, to abolish nuclear weapons and to oppose those policies of the US that are without conscience. This was a point that Bix was reminded of when he was taken back to the BOP and told by his jailer that his re-arrest was a matter of policy, not of conscience.  Bix talked about how policy without conscience reminded him…of the White Rose and their courage in protesting Nazi policies without conscience, even though they were beheaded for their resolve.”

Disarm Now Plowshares has provided addresses for public officials to whom supporters can write, as well as the prison address of Fr. Bichsel.

Update, January 28: Disarm Now Plowshares and the Seattle Times have reported that Fr. Bichsel has broken his fast after two weeks of subsisting on two pints of milk a day:

A Tacoma priest and peace activist best known for breaking into a nuclear submarine base in Kitsap County has ended a two-week fast that drew sharp concern from some in the local faith and peace communities.

Father William “Bix” Bichsel, a Jesuit priest based at St. Leo’s Parish, had been fasting to protest “nuclear weapons, inhumane treatment at prisons and the separation of policy from conscience,” according to his attorney Blake Kremer.

The ailing 83-year-old broke his fast Wednesday, according to portions of a letter from him published in the Disarmnowplowshares’s Blog, because he felt himself weakening…

Bichsel began his partial fast, taking only 2 pints of milk each day, to protest what he saw as the arbitrarily inhumane and harsh treatment of his fellow prisoners as well as to draw attention to his opposition to nuclear weapons and the existence of policies “divorced from conscience,” Kremer said.

News of Bichsel’s sanction, and subsequent fast, sparked outrage and a flurry of letters and phone calls to the prison and the media from members of the faith and peace communities. A vigil was held for him outside the detention center last Sunday…

In his letter last Tuesday, Bichsel said he has now received additional clothing and blankets. In addition, he has been so encouraged by the support from well-wishers and by “a real sense of God’s presence” that he no longer seeks release from the Special Housing Unit.

While he was in prison, local Tacoma cartoonist R.R. Anderson designed a Bix “nonviolent action figure.” 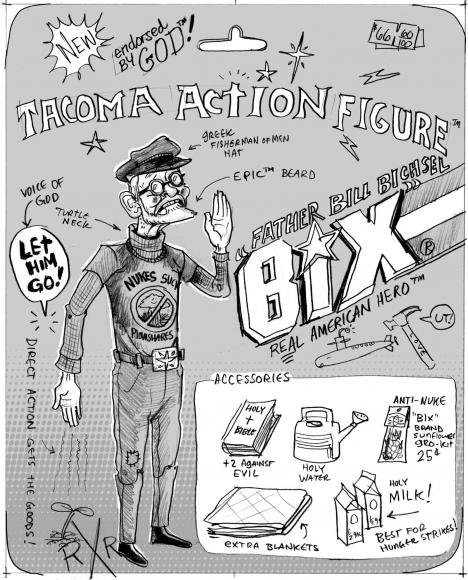