The nation’s supermax prisons and solitary confinement units are virtual black sites, off-limits and therefore invisible to both the public and the press. While laws vary from state to state, the media are for the most part barred from touring these facilities, and forbidden to conduct in-person interviews with prisoners being held in solitary confinement. These rules are made by the prisons themselves, in the name of safety and security, and with few exceptions the courts have acquiesced, ruling that the freedom of the press stops at the prison gate.

A bill introduced in the California State Assembly seeks to challenge the California Department of Corrections and Rehabilitations ban on interviewing prisoners in its notorious Security Housing Units (SHUs) and ease restrictions on interviews with other prisoners. Assembly Bill 1270 was introduced by Assemblymember Tom Ammiano of San Francisco. Ammiano chairs the Public Safety Committee, and held hearings on California’s SHUs in August 2011, following the historic inmate hunger strike that began at Pelican Bay State Prison in July.

According to a fact sheet released by Ammiano’s office, AB 1270 “seeks to restore the media’s ability to conduct pre-arranged in-person interviews with specific prison inmates…It would allow the media to provide more balanced information about our prison systems to keep the public informed and our institutions both transparent and accountable.” (The full fact sheet appears at the end of this post.)

The fact sheet notes: “Media is even more restricted access to the most controversial correctional facilities such as the secure housing units (SHUs).” It goes on to describe the extreme isolation of the SHUs, and mentions findings that link solitary confinement to mental illness and suicide.

According to the bill, the interviews would take place “under the discretion of the California Department of Corrections and Rehabilitation,” which could choose, for safety reasons, to deny a media request to interview a particular inmate. However, “Any responses denying a request must be accompanied by a written explanation for the request denial.” According to the text of the bill, it would also “forbid retaliation against an inmate for participating in a visit by, or communicating with, a representative of the news media.”

Earlier this week, the bill was referred to the Committee on Public Safety, which will decide whether it goes any further. 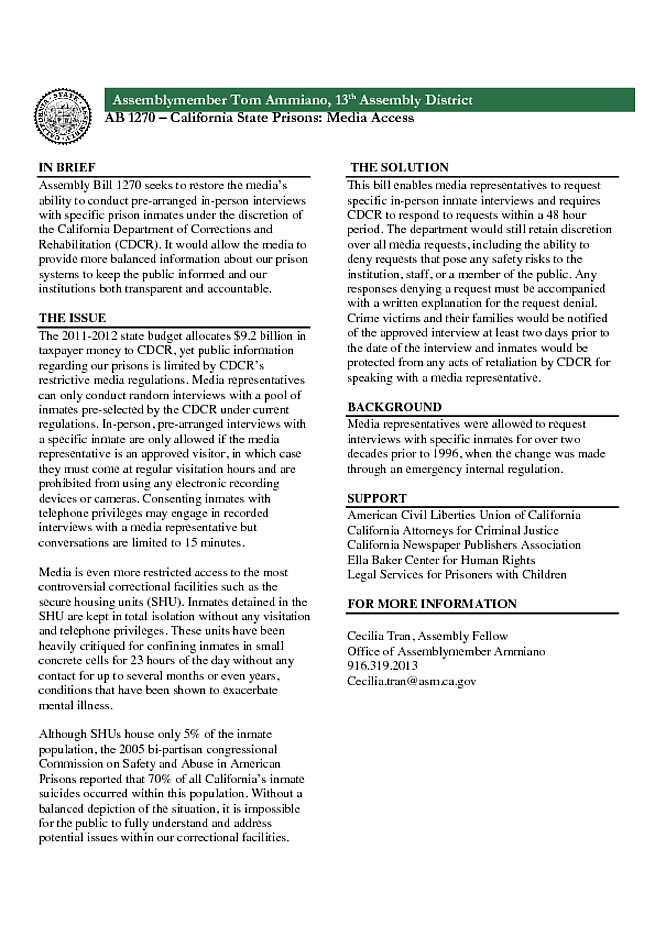