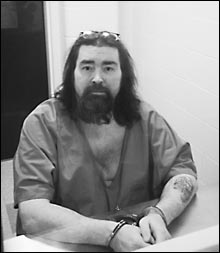 For more than four years, Maine prisoner Deane Brown has faced isolation and exile for his role as a prison journalist and whistleblower.  Brown was serving a lengthy sentence for burglary and robbery in the lockdown unit of Maine State Prison when he began filing reports, by letter, which were aired on WRFR community radio in 2005. The following year he began broadcasting himself, by telephone, in a series of weekly reports on WRFR called “Live from the Hole.” Brown also supplied material to journalist Lance Tapley for his stories in the Portland Phoenix on abuses in the supermax unit.

In late 2006, after receiving letters from the warden warning him to cease “disclosing confidential information through the media,” Brown was suddenly transferred from Maine State Prison to a series of maximum security prisons in Maryland. As Tapley reported at the time, the Maine corrections commissioner called Brown “a very serious threat to the facility,” despite his lack of any violent offenses inside prison.

Now Brown has been moved once again, to a particularly brutal solitary confinement unit in New Jersey, according to a new report by Tapley:

Deane Brown, a Maine inmate shipped out of state because of his criticism of the Maine State Prison, is now being held in New Jersey in “one of the most repressive” prison units in the country, often reserved for “political” or activist prisoners like black radicals, says Bonnie Kerness of the American Friends Service Committee’s national Prison Watch. Inmates are not put there because of what they’ve done but because of who they are, she says, adding that the unit specializes in psychological “no-touch torture” techniques such as sleep deprivation, noise, and unsanitary conditions.

In Brown’s case, toilet water sometimes floods his solitary-confinement cell floor, and he has sores on his feet from his severe diabetes. Day and night he hears a mentally ill prisoner in the next cell banging on his metal door. Two inmates in his unit have recently set themselves on fire. His cell is cold, and he’s allowed only a thin cotton blanket and no pillow.

This picture is put together from reports from Brown’s friend, Beth Berry, of Rockland, who has received phone calls from him, and Jean Ross, a pro-bono attorney who recently visited him at the New Jersey State Prison in Trenton, where he’s in the harsh Management Control Unit.

Maine authorities transferred Brown to Maryland in 2006 after he blew the whistle to the Phoenix on inmate abuse at the state prison’s “supermax” isolation facility. In October Maine prison guards took him from Maryland to New Jersey. In a recent phone call, Brown, 47, told Berry that he had lost 40 pounds since then.

He told Ross he was feeling desperate because the prison wasn’t responding to his medical needs and was violating its rules for the placement of inmates in maximum security. She is relaying his concerns to prison officials.

Sentenced in Maine to 59 years for burglary and robbery, Brown also told Ross he believes he was put in the unit because Maine’s Department of Corrections told its New Jersey counterpart that he’s an escape risk due to his locksmith abilities. He has never tried to escape from prison, he says, or been violent.