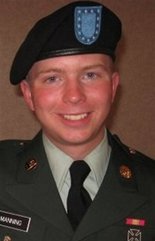 “The Army private charged with leaking an airstrike video and downloading documents remained in solitary confinement Saturday,” according to CNN. “Military officials told CNN that Pfc. Bradley Manning is also the prime suspect in the latest leak of documents to the WikiLeaks website.”

The 22-year old military intelligence analyst was arrested in Iraq in May for leaking the video, and has been held in military detention in Kuwait. On Thursday he was transferred from Kuwait to the Marine Corps Base Quantico Brig in Quantico, Virginia. There, according to a military spokesperson, Manning “was routinely processed…The suspect is in solitary confinement and is being observed in accordance with normal operating procedures.”

Manning’s legal future is complex. He has already been charged with leaking a 2007 airstrike video and downloading documents from classified military systems. And he is suspected in the latest leak of thousands of Afghanistan field reports to the Wikileaks.org website…

What all this strongly suggests is that Bradley Manning can look forward to a long period in solitary confinement before he is convicted of any crime. Considering the charges, it would be surprising if he were not also subjected to severe restrictions on his communications with the outside world and even his family, along the lines of the Special Administrative Measures, or SAMs, that have been widely used (and abused) against terrorism suspects. Complete isolation will be key to silencing this man who knew too much, and who shared what he knew with the American public.