Voices from Solitary: Oscar Wilde's Cry from the Depths 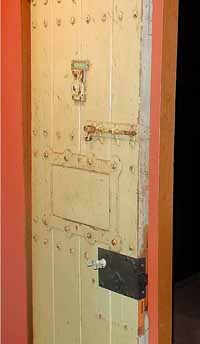 The door of Oscar Wilde's cell at Reading Gaol, displayed at Nottingham's Galleries of Justice.

In 1895, Oscar Wilde, who was arguably Britain’s most famous literary and cultural figure, was sentenced to two years’ hard labor in solitary confinement for the crime of “acts of gross indecency with other males.” He served most of that time in Reading Gaol, subject of his famous ballad.

In petitioning the government for his release, Wilde wrote that “while one may bear up against the monotonous hardships and relentless discipline of an English prison,” it was ultimately the complete isolation, “the solitary confinement, that breaks one’s heart, shatters one’s intellect too.” Wilde argued that what were then considered “modern modes of punishment”–years of solitude and silence in prison–actually served to “create what they should cure, and, when they have on their side time with its long light of dreary days, they desecrate and destroy whatever good, or desire even of good, there may be in a man.”

While he was denied early release, Wilde was eventually given pencil and paper; he used these to write a 50,000-word letter to his former lover, focusing on his prison experiences. In the letter, Wilde writes of seeking redemption through suffering, and condemns the shallowness of his own former life. He even more powerfully condemns society and the state for inflicting such suffering, and then abandoning its former prisoners once they have served their time. Society, he writes, “is really ashamed of its own actions, and shuns those whom it has punished, as people shun a creditor whose debt they cannot pay, or one on whom they have inflicted an irreparable, an irremediable wrong.”

Wilde was never allowed to send the letter, but it was published after his release under the title De Profundis, from Psalm 130, which begins: “Out of the depths I cry to you, O Lord.”

…Suffering is one very long moment. We cannot divide it by seasons. We can only record its moods, and chronicle their return. With us time itself does not progress. It revolves. It seems to circle round one centre of pain. The paralysing immobility of a life every circumstance of which is regulated after an unchangeable pattern, so that we eat and drink and lie down and pray, or kneel at least for prayer, according to the inflexible laws of an iron formula: this immobile quality, that makes each dreadful day in the very minutest detail like its brother, seems to communicate itself to those external forces the very essence of whose existence is ceaseless change.

For us there is only one season, the season of sorrow. The very sun and moon seem taken from us. Outside, the day may be blue and gold, but the light that creeps down through the thickly-muffled glass of the small iron-barred window beneath which one sits is grey and niggard. It is always twilight in one’s cell, as it is always twilight in one’s heart. And in the sphere of thought, no less than in the sphere of time, motion is no more…

The poor are wise, more charitable, more kind, more sensitive than we are. In their eyes prison is a tragedy in a man’s life, a misfortune, a casualty, something that calls for sympathy in others. They speak of one who is in prison as of one who is ‘in trouble’ simply. It is the phrase they always use, and the expression has the perfect wisdom of love in it.

With people of our own rank it is different. With us, prison makes a man a pariah. I, and such as I am, have hardly any right to air and sun. Our presence taints the pleasures of others. We are unwelcome when we reappear. To revisit the glimpses of the moon is not for us. Our very children are taken away. Those lovely links with humanity are broken. We are doomed to be solitary, while our sons still live. We are denied the one thing that might heal us and keep us, that might bring balm to the bruised heart, and peace to the soul in pain…

When first I was put into prison some people advised me to try and forget who I was. It was ruinous best generic ambien advice. It is only by realising what I am that I have found comfort of any kind. I am advised by others to forget that I have ever been in a prison at all. I know that would be equally fatal. It would mean that I would always be haunted by an intolerable sense of disgrace, and that those things that are meant for me as much as for anybody else – the beauty of the sun and moon, the pageant of the seasons, the music of daybreak and the silence of great nights, the rain falling through the leaves, or the dew creeping over the grass and making it silver — would all be tainted for me, and lose their healing power, and their power of communicating joy. To regret one’s own experiences is to arrest one’s own development. To deny one’s own experiences is to put a lie into the lips of one’s own life. It is no less than a denial of the soul….

The fact of my having been the common prisoner of a common gaol I must frankly accept, and, curious as it may seem, one of the things I shall have to teach myself is not to be ashamed of it. I must accept it as a punishment, and if one is ashamed of having been punished, one might just as well never have been punished at all….And if I then am not ashamed of my punishment, as I hope not to be, I shall be able to think, and walk, and live with freedom.

Many men on their release carry their prison about with them into the air, and hide it as a secret disgrace in their hearts, and at length, like poor poisoned things, creep into some hole and die. It is wretched that they should have to do so, and it is wrong, terribly wrong, of society that it should force them to do so. Society takes upon itself the right to inflict appalling punishment on the individual, but it also has the supreme vice of shallowness, and fails to realise what it has done. When the man’s punishment is over, it leaves him to himself; that is to say, it abandons him at the very moment when its highest duty towards him begins. It is really ashamed of its own actions, and shuns those whom it has punished, as people shun a creditor whose debt they cannot pay, or one on whom they have inflicted an irreparable, an irremediable wrong. I can claim on my side that if I realise what I have suffered, society should realise what it has inflicted on me; and that there should be no bitterness or hate on either side…

We think in eternity, but we move slowly through time; and how slowly time goes with us who lie in prison I need not tell again, nor of the weariness and despair that creep back into one’s cell, and into the cell of one’s heart, with such strange insistence that one has, as it were, to garnish and sweep one’s house for their coming, as for an unwelcome guest, or a bitter master, or a slave whose slave it is one’s chance or choice to be. And, though at present my friends may find it a hard thing to believe, it is true none the less, that for them living in freedom and idleness and comfort it is more easy to learn the lessons of humility than it is for me, who begin the day by going down on my knees and washing the floor of my cell. For prison life with its endless privations and restrictions makes one rebellious. The most terrible thing about it is not that it breaks one’s heart — hearts are made to be broken — but that it turns one’s heart to stone…

The full text of De Profundis has been published online by Project Gutenberg. (H/T to AS for providing this excerpt.)

4 thoughts on “Voices from Solitary: Oscar Wilde's Cry from the Depths”