Most House Republicans Vote to Let Schoolchildren Be Held Down, Tied Up, and Put in Solitary Confinement 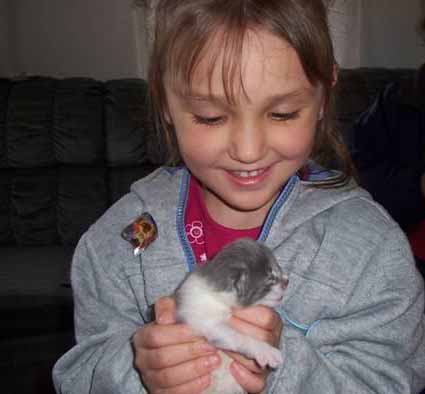 The 7-year-old special needs girl who died of suffocation while in a "prone restraint." Photo: NDRN

On Wednesday afternoon, the United States House of Representatives passed H.R. 4247, the  Preventing Harmful Restraint and Seclusion in Schools Act (now being called the Keeping All Students Safe Act), by a vote of 262-153. In the final vote count, 238 Democrats and just 24 Republicans voted for the bill, while 8 Democrats and 145 Republicans voted against it. (Check out the full roll call here.)

H.R. 4247 was introduced in December by Education and Labor Committee chair George Miller (D-CA) and Committee member Cathy McMorris Rodgers (R-WA) and bill passed out of committee with bipartisan support. Their goal, Miller and Rodgers wrote in a joint op-ed for CNN, was simply to “outlaw child abuse in schools.” The bill’s stated purposes include the following:

(1) prevent and reduce the use of physical restraint and seclusion in schools;

(2) ensure the safety of all students and school personnel in schools and promote a positive school culture and climate;

(A) physical or mental abuse;

(B) aversive behavioral interventions that compromise health and safety; and

(C) any physical restraint or seclusion imposed solely for purposes of discipline or convenience;

(4) ensure that physical restraint and seclusion are imposed in school only when a student’s behavior poses an imminent danger of physical injury to the student, school personnel, or others….

It’s hard to decide which is more shocking: the fact that 153 members of the United States Congress would see fit to vote against such a bill, or the fact that it was needed in the first place.

In fact, the bill’s findings state that “physical restraint and seclusion have resulted in physical injury, psychological trauma, and death to children in public and private schools.” The House Education and Labor Committee conducted hearings on the subject last spring, after the Government Accountability Office published a report that began with the following statement:

Although GAO could not determine whether allegations were widespread, GAO did find hundreds of cases of alleged abuse and death related to the use of these methods on school children during the past two decades. Examples of these cases include a 7 year old purportedly dying after being held face down for hours by school staff, 5 year olds allegedly being tied to chairs with bungee cords and duct tape by their teacher and suffering broken arms and bloody noses, and a 13 year old reportedly hanging himself in a seclusion room after prolonged confinement.

Special education students were especially vulnerable to this kind of treatment, the report found:

For example, teachers restrained a 4 year old with cerebral palsy in a device that resembled a miniature electric chair because she was reportedly being “uncooperative.”….Teachers confined [a 9 year old with learning disabilities] to a small, dirty room 75 times over the course of 6 months for offenses such as whistling, slouching, and hand waving….In another case, a residential day school implemented a behavior plan, without parental consent, that included confining an 11-year-old autistic child to his room for extended periods of time, restricting his food, and using physical restraints. The child was diagnosed with post traumatic stress disorder as a result of this treatment.

A report published earlier last year by the National Disability Rights Network (NDRN) provided additional examples, including one in which a 7-year-old Wisconsin girl, who was diagnosed with an emotional disturbance and ADHD, died of suffocation after several adult staff pinned her to the floor in a “prone restraint” because she was blowing bubbles in her milk.

A handful of earlier accounts also exposed the widespread use in schools of “seclusion rooms” or “time-out rooms”–basically, solitary confinement cells for difficult-to-control children. Mary Hallowell wrote about one such case in her 2009 book Forgotten Rooms. According to an article the Atlanta Journal-Constitution:

Education researcher Mary Hollowell spent months chronicling an alternative high school in rural Georgia before she discovered the awful secret that continues to haunt her today. Walking with the principal down a hall, Hollowell heard a loud pounding. She followed the principal into a room and then through a connecting doorway that led to a solitary confinement cell double bolted from the outside.

“The cell was dark inside and had a small, square window,” she said. “It was the kind of set-up you saw in a mental institution, not a school.” Inside the cell was a boy Hollowell recognized; she had tutored him in reading and even had artwork from him. “I felt like I had been punched in the stomach when I realized what I was seeing,” she says. “The principal’s comment to me was that most people didn’t know this room was there.” 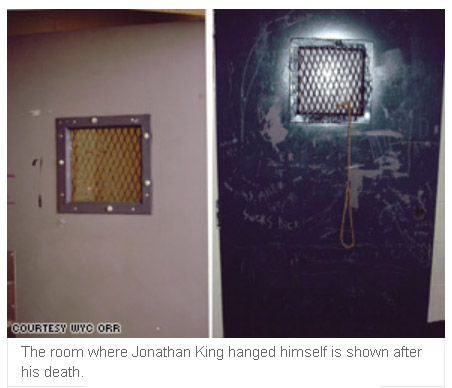 The "seclusion room" at a Georgia school, where a 13-year-old hanged himself.

As the Atlanta Journal-Constitution reported: “Seclusion rooms are allowed in Georgia public schools provided they are big enough for children to lie down, have good visibility and have locks that spring open in case of an emergency such as a fire. In 2004, Jonathan King, 13, hanged himself in one such room, a stark, 8-foot-by-8-foot ‘timeout’ room in a Gainesville public school.” Jonathan was also a special ed student, who had ADHD and depression. He had talked about suicide to the school psychologist, but she concluded it was “an escape or attention-getting technique,” according to the Gainesville Times. A civil rights lawsuit brought by his parents was thrown out of federal court.

These are the sorts of abuses that H.R. 4247 seeks to address. And the pressing need for federal legislation is clear from the GAO report: “GAO found no federal laws restricting the use of seclusion and restraints in public and private schools and widely divergent laws at the state level,” it said. In addition, “GAO could not find a single Web site, federal agency, or other entity that collects information on the use of these methods or the extent of their alleged abuse.”

Yet 153 members of Congress chose to vote against a law that would expose and limit what can in some cases only be described as the torture of schoolchildren.

Perhaps not so shocking after all: In a country that condones torture not only in its military detention centers, but in its state and federal prisons, immigration jails, and juvenile detention centers, it was only a matter of time before it trickled down, even into our schools.

29 thoughts on “Most House Republicans Vote to Let Schoolchildren Be Held Down, Tied Up, and Put in Solitary Confinement”