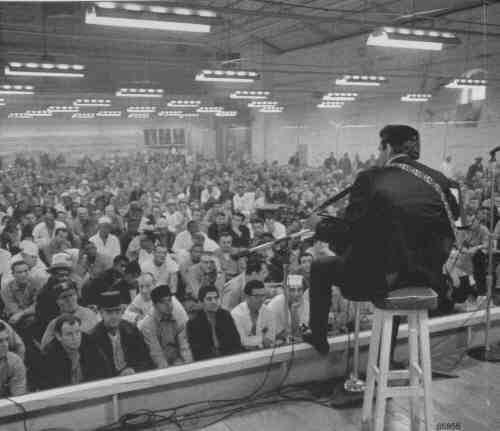 Yesterday would have been Johnny Cash’s 78th birthday. Prison Law Blog dug out this NPR story from 2005 on Cash’s famous visit to Folsom Prison in 1968, which includes a recording of him singing “Folsom Prison Blues” for an audience of inmates. Listen to it here.

Since that recording was made, the U.S. prison population has increased seven-fold, and the brutal conditions inside prisons and jails–from solitary confinement to dismal health care and widespread rape–are a national disgrace. But, as Nicholas Kristof acknowledged recently in the New York Times, “the horrors that go on in American prisons” remain a “blind spot” for most of its citizens.

Which brings us back to one of the verses of Cash’s “Folsom Prison Blues,” which is about an inmate who listens from his cell to a train rolling past:

I bet there’s rich folks eating
In a fancy dining car,
They’re probably drinking coffee,
And smoking big cigars.
Well I know I had it coming,
I know I can’t be free,
But those people keep a-moving,
And that’s what tortures me.