Writer, editor, and solitary survivor Sarah Shourd is partnering with Solitary Watch to write and produce a play using real stories from a diverse pool of people in solitary confinement in the United States today. The stories will represent a spectrum of people—immigrants, children, lifers and women. Some will have lived in solitary for a quarter of a century, others a few months or weeks. Sarah writes of the project:

A grey, limitless ocean that stretches out in front and behind you–a colorless world with almost all the life drained out of it–an emptiness and loneliness so inescapable and all-encompassing it feels like it might erase you. The best way I know to describe the psychological torture of prolonged solitary confinement is that it feels like a slow death. Day by day, you lose your connection to everything outside the prison walls, everything you once knew and everything you once were.

I spent 410 days in isolation while held as a political hostage by the Iranian Government in 2009-2010. Now, I’m partnering with Solitary Watch to collect real stories from a diverse spectrum of people living in solitary confinement today–immigrants, children, lifers and women. Then, I’m going to write a play about it and go on tour. Click here to see our video and learn more.

While watching this play, I want the audience to breathe along with a young man having a panic attack after being denied a visit with his mother, to crawl inside the skin of an immigrant detainee terrified of being deported and to travel with a lifer on a magic carpet of memory–only to be pulled back into the stark, implacable reality of the hole. By hearing can i order xanax these stories, my hope is that the audience will be able to relate to the men and women enduring this torture in our prisons, to their pain but also to their resistance to the dehumanizing forces around them, their incredible resilience…and their refusal to be institutionalized.

The goal of our play is to add to the momentum of a burgeoning movement. In 2011 United National Special Rapporteur on Torture Juan Mendez criticized the international trend toward extreme over-reliance on solitary confinement–he said that 15 days in isolation is enough to cause permanent psychological damage and constitute torture. A few months later, the largest prison hunger strikes in U.S. history exploded in California’s prisons, followed in 2012 by the first-ever congressional hearing challenging the use of prolonged isolation in our prisons. In response to this increasing pressure, a handful of states across the U.S. have already transferred a significant number of inmates out of solitary and the U.S. Bureau of Prisons has agreed to conduct a review.

For most of the 20th century the practice of solitary confinement was rare in the United States–but today we hold more people in prolonged isolation that any country in the world. It doesn’t have to be this way. In Brittan they tried using solitary confinement in their prisons, but when it became clear how ineffective, costly and dangerous it was–they decided to stop relying on it. We can do the same. If we do, it will be a crucial step towards creating a system of justice that truly rehabilitates, creating a safer society without relying on torture.

Click here to find out more about the project, and learn how you can support Opening the Box. 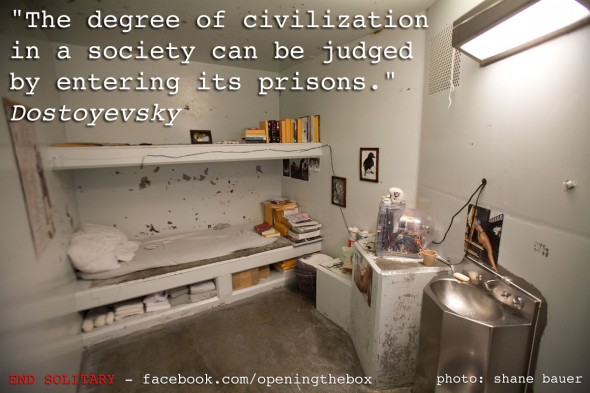