The “Primer on Solitary Confinement in the United States” PowerPoint was produced for the National Religious Campaign Against Torture by Solitary Watch and Tamms Year Ten. This 78-slide PowerPoint is an illustrated introduction to the effects of solitary confinement, how and on whom it is used, and national resistance to solitary. 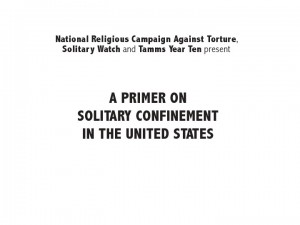