About a year after our founding in 2009, when we realized that the shoestring project called Solitary Watch was something that desperately needed to be maintained and expanded over the long term, we also acknowledged a disconcerting truth: Our most important potential readership was also the one group of people who could not access our work.

We needed to find a way to reach people in prison — and especially people in solitary confinement. So we began periodically sending out a four-page print edition, with a selection of articles drawn from our website, as well as “news briefs” on the important stories we did not have the space to include. At first we sent it to a few hundred individuals whose names we had obtained from loved ones on the outside, from advocates, and from a few listings in other newsletters that went to people in prison.

Soon, requests for the print edition began to trickle in from incarcerated men and women who heard about it through shouted or whispered communications, or had it passed to them through the cracks under cell doors. More requests came, on behalf of people in solitary, from family members, friends, and pen pals in the free world. Today, we receive 30 to 50 new requests each week, and our print edition goes out to more than 5,000 incarcerated individuals, nearly all of them living in isolation.

The printing and mailing of the print edition is made possible through the generosity of donors who support our Lifelines to Solitary project. 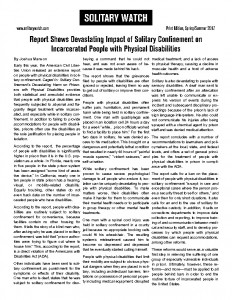